Utility floor space is the floor area measured within the outer walls. As defined in Norwegian Standard NS 3940 Area and volume calculations of buildings.

Multi-dwellings:
The price is the sales price for the consumer, including the value of the estate, VAT and other taxes. For dwellings in housing co-operatives the deposit and joint debt are both included in the sales price.

The price refers to the point of time when the contract is signed.

Detached houses:
The price used in the index is what the investor (final owner) has to pay for a new detached house excluding site value, or costs such as connection to road, water and sewer services, duties and administrative fees, and interest on building loans. VAT is included in the price calculation.

The price refers to the quarter in which the municipalities register the construction work as completed.

Type of building is in accordance with the classification used in the the Cadastre.

Region:
The average price per square meter has been calculated per region.

City:
The average price per square meter has been calculated for the largest cities: Oslo, Bergen, Trondheim and Stavanger.

Quarterly. The statistics will be published about 80 days after the end of the quarter.

Price index for new multi-dwellings and new detached houses are aggregated to a Price index for new dwellings. This index will be transferred to Eurostat in accord with the regulation concerning the establishment of owner-occupied housing price index.

The data will be stored and researchers at approved research institutions can apply for access to data for a research Project.

The purpose of the index is to measure the price development of new dwellings.

The Price Index for new multi-dwellings was first published in 2015, with a time series back to the first quarter of 2011.

Price index for new detached houses has been published since 1989 as an initiative by The Norwegian Financial Services Association (FNH).

The price indexes are important indicators for housing constructors, financial institutions, government and others interested in the housing market. In European context, Eurostat is an initiator for harmonized house price indices. Norwegian State Housing Bank and other financial institutions use the index to analyse and monitor price/cost changes.

No external users have access to the statistics and analyses before they are published and accessible simultaneously for all users on ssb at 8 am. Prior to this, a minimum of three months' advance notice is given in the Statistics Release Calendar.

The price indices for new multi-dwellings and new detached houses are not coherent with the construction cost index, the latter does not include changes in productivity and the profit margin.

The population is all new multi-dwellings that are sold to an end-consumer in the actual quarter.

Data is collected from construction companies and real estate developers. The sample should include the most important enterprises in the industry.

The data for computing the price index are obtained from two governmental administrative registers: the Norwegian Cadastre and Register of Deeds (grunnboken). The Cadastre provides information on dwellings completed during the reference period; location, utility floor space and who the owner is. The Register of Deeds provides price information, both sales price and plot value.

The information is collected electronically through the Altinn internet portal for public reporting. Some information is withdrawn from the real estate register of sales of dwellings. This contains mainly existing dwellings, but some new dwelling is also registered here.

Re-contact with the respondent occurs but is not common.

As of the first quarter of 2020, there is no separate survey related to these statistics.

For both examinations, extreme values are checked and removed if necessary.

The indexes are calculated as chained indexes with annual links. The base is changed in the 1st quarter, with the previous year as a new base year.

Extreme values are checked and removed if necessary.

Single units can not be identified in the dissemination.

The index series goes back to the 1st quarter of 2011 and the same calculation method is used in this period.

The index series dates to 1989. The index has previously been based on a survey as part of the data collection. As of the first quarter of 2021, the index is based on data from the Cadastral and Register of Deeds as a substitute for the form survey.

As of 2021, the main source for calculating square meter prices has changed from a form survey to register data from the cadastre and grunnboken.

These changes mean that the current square meter price for new detached houses (table 13500) area not directly comparable with the square meter prices for new detached houses in table 03364 (closed time series). Furthermore, there are somewhat fewer observation now compared to earlier. This means that the figures can not be presented at county level as before, but are replaced by a regional table.

Enterprises that have sales information on new dwellings can belong to different industries. There may be cooperation between enterprises and sometimes new enterprises are established because of a housing project. Since the dwellings sometimes lack a unique identification code early in the construction phase, duplicates may occur.

There will be a certain amount of non-responses in formbased surveys. In this survey the per cent of non-response is below 5, which is considered to have minimal impact of the results. Partial non-respons may also occur, and in most cases the enterprise then will be re-contacted.

The share of the total population that is covered by the sample, is estimated to vary between 22 and 36 per cent from 2011 to 2014. However, this estimate is uncertain because the exact number of transactions of new dwellings is unknown.

Observations with unlikely extreme values, such as incorrect registration in the Cadastre are reviewed and possibly removed.

Due to registration delays in the Cadastre, not all detached houses registered as completed during the quarter in question are completed during this quarter. Average delay measured in 2020 was 0.7 months. Municipalities can make mistakes when registering data. There are also municipalities that, for various reasons, do not always follow the current registration rules in the Cadastre. It may also happen that buildings are incorrectly classified, i.e. that a detached house has been given another type of building classification in the register. These detached houses will then not be included in the calculations.

Information provided in connection with the registration of real estate is assumed to be reliable. However, incorrect classification of, for example, type of property and type of dwelling may occur. There may be some delay in registration. Detached houses that are not registered until 8-9 weeks after the end of the quarter in which the house was registered finished in the Cadastre will not be included in the calculation. 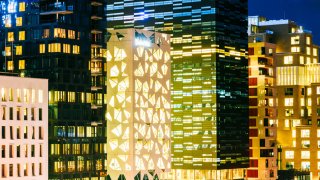