The financial accounts are designed to provide a comprehensive and consistent survey of institutional sectors’ financial assets, liabilities and financial transactions.

The financial balance sheet shows the financial position of a sector at the end of the reference period and is broken down into categories of financial assets and liabilities. The predominant assets held by, for example, the households are insurance technical reserves, currency and deposits, while loans provided by financial corporations (banks etc) constitute the main proportion of liabilities.

The change in the financial balance sheet during the reference period is a result of accumulated financial transactions and other changes in assets. The latter category mainly reflects revaluations due to changes in market prices of financial instruments.

The accounting system provides the framework and contents required for compiling national accounts statistics. In the system, each financial asset has a counterpart liability. This is reflected by the data structure of the financial accounts which is three-dimensional; creditor sector * debtor sector * financial instrument.

The institutional sector classification in the financial accounts is based on the recommendations of the SNA 2008 and ESA 2010. The main sectors of system are detailed below:

The total economy of a country consists of all institutional units having their centre of predominant economic interest in the economic territory of that country. Such uints are known as resident units, irrespsctive of natonalty and legal form.

Braches and other establishment of Norwegian corporation abroad are not included. See rest of world.

The sector covers institutional units engaged in the market production of non-financial products and services. The main sector is divided into the following sub-sectors:

services, supplies labour and as entrepreneurs, supplies the production of market goods and services. The sector comprises the &“consumers of the economy´´. Total consumption expenditure is partly financed by the households themselves, partly by general government and partly non-profit institutions serving households. The households also produces goods and services for their own consumption. The services related to housing is the largest part of the self-produced, self-consumed service. Because the property in tenant-owner’s associations are considered as owner-tenant properties, the tenant-owner associations are included in the households sector.

NPISHs consist of non-profit institutions that are separate legal entities, which serve households and which are principally engaged in the production of non-market goods and services intended for households. Their main resources, apart from those derived from occasional sales, are transfers from general government, voluntary contributions by households and corporations, and property income.

2 Rest of the world

The classification of financial assets and liabilities

Classification of financial assets and liabilities in the financial accounts is based on the recommendations of the SNA 2008 and ESA 2010. The classifications are described below:

Comprise Norwegian and foreign notes and coins, all types of deposits with commercial banks and savings banks, Norges Bank and foreign banks. The net reserves position with the IMF is also included. The financial accounts distinguish between the following types of detailed financial instruments:

This financial instrument includes lending forms other than tradable debentures and certificates and is mainly quantified on the basis of the specifications in accounting statistics for financial corporations. The financial accounts distinguish between the following types of detailed financial instruments:

AF5 Shares and other equity

The financial accounts distinguish between the following types of detailed financial instruments:

Financial derivatives are not quantified as a separate financial instrument but are included in AF8 Other accounts receivable/payable (see AF8).

Comprise claims and debt that is due to differences in timing between transactions and payments. For example credit extended to a customer/supplier credit, deferred tax claims/liabilities. Included are also other financial items that do not belong to the previously listed instruments. Derivatives recorded in the accounting statistics are included. The financial accounts distinguish between the following types of detailed financial instruments:

Eurostat, Organisation for Economic Co-orporation and Development(OECD) and Bank for International Settlement (BIS).

Finse is the name of today’s database system for the financial accounts with time series from 4 th quarter of 1995. The system was revised for the second time in 2014 and results from the main revision were published on 3 december 2014 with time series to 2nd quarter of 2014.

No external users have access to the statistics and analyses before they are published and accessible simultaneously for all users on ssb.no at 08:00 am. Prior to this, a minimum of three months' advance notice is given inthe Statistics Release Calendar.

Council Regulation No 549/96 of 21 June 1996, The European system of national and regional accounts in the European Union (Text with EEA relevance).

The institutional part of the national accounts system describes all economic transactions involving the various institutional sectors and provides information on the stocks of financial and non-financial capital. The delineation of the economy with regard to the rest of the world is based on the concept of resident units. A unit is a resident unit when it is engaged in economic activity in a territory for a long period of time i.e. when it has a centre of economic interest in the economic territory in question for at least one year.

The financial accounts contain two fundamental types of information: flows and stocks. Flows refer to changes in stocks that take place during a certain period of time while stocks refer to the situation at a certain point in time e.g. at the beginning or the end of a period. The financial accounts distinguish between three main types of events that can appear during an accounting period

Changes in stocks that is due to change in ownership of financial assets based on mutual agreement between institutional entities. For example by buying/selling securities, or entering into contracts which simultaneously create a financial asset on one side and a counterpart liability on the other side. (e.g. loan contracts). These events are classified as transactions and they describe the entities behaviour in the financial markets.

The values of financial assets can also change due to changes in prices or exchange rates. These events are classified in a separate category and recorded as other changes in stock on the revaluations account.

Changes that are due to extraordinary events (e.g. bankruptcies, natural catastrophes) or events of a non-economic nature (e.g. changes in statistical classifications, new definitions) are treated as a separate category and recorded as other changes in stock on the other change in volume of assets account.

The financial accounts are based on source statistics collected by other divisions in Statistics Norway.

The compilation process comprises a long list of reconciliation procedures and consistency checks, which also contributes to the quality assurance of the different statistical sources.

The source statistics may have to be adjusted in order to fulfil the requirements of the financial accounts; first source data have to be adapted to financial accounts data structure; source data are then balanced in the database system. In cases where we have two or more data sources for the same asset relationship, one data serie is selected according to predetermined rules. The most important choice is between creditor and debtor information. Discrepancies occur when there are differences in information given from the creditor and debtor respectively.

Discrepancies can be explained by different definitions or different estimations of value, but can also occur due to errors and shortcomings in the statistical sources. In cases where errors are revealed, this is reported to the division responsible for the compilation of the statistics in question.

Stocks and transactions are not adjusted. Rates and growth figures are published both adjusted and unadjusted.

The Finse database provides comparable quarterly figures over time from the 4th quarter of 1995. The old database system Findatr, provides comparable quarterly financial balance sheets from the 4th quarter of 1975. Net lending/net borrowing exists as an annual time series for all sectors in Findatr, with the exception of financial accounts for households and NPISH, which have been published on a quarterly basis since 1990. 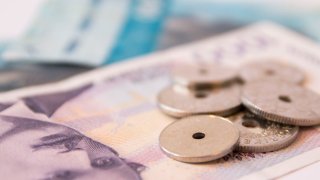 Article / 6 September 2021
Main revisions in the statistics published on 2. quarter 2021
Households’ owned mutual fund shares are increased. Their assets and transactions in insurance and pension entitlements are also revised.