The statistics include production, power exchange and consumption. The monthly electricity statistics should be used when the latest data is needed. The annual figures have more detailed information and also include electricity prices, profit and loss accounts and investments.

Electricity generation contains net production. Consumption related to pump storage and industrial processes should be reported separately and is included in the net production.

Exports of electric power is power produced in Norway that crosses the Norwegian border.

Imports of electric power is power produced abroad that crosses the Norwegian border.

Pump consumption is power used to run pump stations that elevate water from a lower to higher level.

Power-intensive manufacturing is defined as pulp and paper production, industrial chemicals, iron, steel and ferro-alloys in addition to primary aluminium and other metals. The definition corresponds to the following codes in the standard for sector classification (2007) :

Consumption without power-intensive manufacturing and extraction

Gross production of electricity refers to the production that is measured on the generators. The net production may also be calculated by subtracting own consumption in the power stations.

Exports of electric power is power produced in Norway that crosses the Norwegian border.

Imports of electric power is power produced abroad that crosses the Norwegian border.

Pump consumption is power used to run pump stations that elevate water from a lower to higher level.

Other own consumption contains light and heating in the power stations in addition to engines, compressors and other production equipment.

Grid rent, i.e. the price that households pay for the physical distribution of electricity. Unlike the deregulated electricity price, the grid rent is regulated.

Taxes consist of tax on consumption of electricity, value added tax (VAT) and subsidies to Enova. All counties in Norway have the same tax rate for the consumption of electricity, apart from some parts of Troms and the whole of Finnmark, which are exempt. The Enova tax was 1 øre/kWh in 2014 and is the same for all households throughout the country. VAT is added after electricity price, grid rent and other taxes have been added. Nordland, Troms and Finnmark are exempt from VAT.

Production value is defined as turnover corrected for changes in stock of finished goods, work in progress and goods and services bought for resale.

Value added is the sum of production value minus the cost of goods and services consumed.

The consumer groups in the table with information on electricity consumption in Norwegian municipalities have the following content.

Services etc: Transportation and storage and construction and other services.

The classification is based on the standard for sector classification 2007 (SN2007). There is a description of which industries the statistics comprise in section 3.1.

Figures for production and consumption are on a national level.

Monthly publication. The monthly electricity statistics are published about 15-17 days after the reference month.

Annual. The statistics are published 11 months after the reference year.

Data from both statistics are reported to Eurostat and the International Energy Agency (IEA).

The annual electricity statistics are reported to Eurostat and the International Energy Agency (IEA).

Microdata are stored in a Oracle database.

The purpose of the statistics is to map the production and consumption of electricity. The monthly electricity statistics also serve as a basis for analysis and reports. The current statistics date back to 1979.

The purpose of the statistics is to give an overview over economic key figures of the power market and to follow the development in supply and use of electricity on national level and on county level. The statistics go back to 1937, but have been changed several times since then.

External users are the Ministry of Petroleum and Energy, IEA and Eurostat.

External users are the Ministry of Petroleum and Energy, the Ministry of Finance, Norwegian Water Resources and Energy Directorate, Enova, the International Energy Agency (IEA) and Eurostat. The Annual electricity statistics are important input to the Energy balance and energy account. The data material is also used by the Divison for National Accounts (930) and Divison Industrial Production Statistics in Statistics Norway.

No external users have access to the statistics and analyses before they are published and accessible simultaneously for all users on ssb.no at 8 am. Prior to this, a minimum of three months' advance notice is given in the Statistics Release Calendar.

For more information, see Principles for equal treatment of users in releasing statistics and analyses

The monthly statistics are used in the revision of the annual electricity statistics. The two statistics correspond well.

The quarterly electricity price statistics have the most up-to-date electricity prices and provide information about different types of price contracts (spot price, variable price and fixed price). The annual electricity statistics are more detailed and the data source covers the whole population.

Data are reported to Eurostat according to Regulation 1099/2008.

Data are reported to Eurostat according to Regulation 1099/2008.

Electricity consumption in power-intensive manufacturing based on the standard for sector classification 2007 includes:

24.1 – Production of iron, steel and ferroalloy

24.4 – Production of aluminium and other metals

The enterprise is the statistical unit.

The Electricity statistics contain all electricity plants that have a license for electricity generation, transmission and distribution in addition to trade of electricity.

The Electricity statistics do not contain:

* Main office activities in own enterprises

Production of electricity:
Total count of all power plants in Norway.

Data collection together with Norwegian Water Resources and Energy Directorate.

Statistics Norway receives a dataset from Elhub with measured values for production and consumption of electricity for all metering points in Norway. Since Svalbard is not included in the Elhub data, electricity data from Svalbard is collected in an own survey. Electricity import and export are reported by Statnett once per month.

As of 2000, the electricity utilities have reported their data electronically via the system ERAPP.

Among other things, maximum and minimum values in addition to percentage changes are calculated

According to §7 and §8 of the Statistics Act, collected data are subject to secrecy and must be kept or destroyed in a secure manner. Any use of the data must be in accordance with the rules set out by the Data Inspectorate.

In some municipalities and counties a few units may account for a large share of the electricity production and consumption. However, these figures are not considered to be particularly detrimental for the relevant enterprises.

The statistics are comparable back to 1979. However, prior to 1993 the information is less detailed than in later releases.

From January 2016, the basis for calculating net loss was changed from utilising loss shares of the Norwegian Water Resources and Energy Directorate to loss shares calculated from net loss reported in the annual electricity statistics. This affects the series net loss, net consumption of electric power and consumption without power-intensive manufacturing and extraction somewhat. The new way of calculating net loss ensures a closer correspondence between the monthly and the annual electricity statistics. All series in Statbank are updated dating back to January 2010

As from the release of the monthly electricity statistics of January 2020 Elhub has been utilised as datasource for consumption in power intensive manufacturing. The change does not have an impact on the time series of pulp and paper production, production of chemical commodity etc., production of iron, steel and ferroalloy and production of aluminium and other metals.

In the electricity statistics of 2008 the sale to different end users is based on a new version of Norwegian industry classification (SIC2007) . The most important changes are:

The enterprise is the statistical unit. Prior to 1993 the establishment was the unit, defined as all energy activities located in one distribution area. This change concerns only utilities with activities in several distribution areas and it only affects the total count of electricity utilities.

Despite various data controls, errors can still occur. These can include errors that were not possible to detect during the control routines or incorrect evaluations by executive officers in Statistics Norway.

The statistics are based on a full count, and thus there are no sampling errors.

Despite various data controls, errors can still occur. These can include errors that were not possible to detect during the control routines or incorrect evaluations by executive officers in Statistics Norway.

The figures of electricity generation are not revised after the release of the statistics. Minor revisions may occur for the figures of exports, imports and consumption.

If no large errors are detected after the release of the statistics, the figures are not revised. 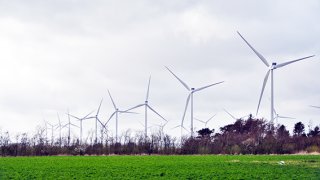