The number of foreign participants has increased by 270 persons from 2012 to approximately 1 350 participants. This is an increase of 24 per cent within this group. Most countries had a reduction in the number of participants, with the exception of Sweden, which had a significant increase. Denmark and Russia had previously dominated the statistics of foreign participants but both countries had significant reductions from 2012; Denmark by as much as 46 per cent and Russia by 23 per cent. 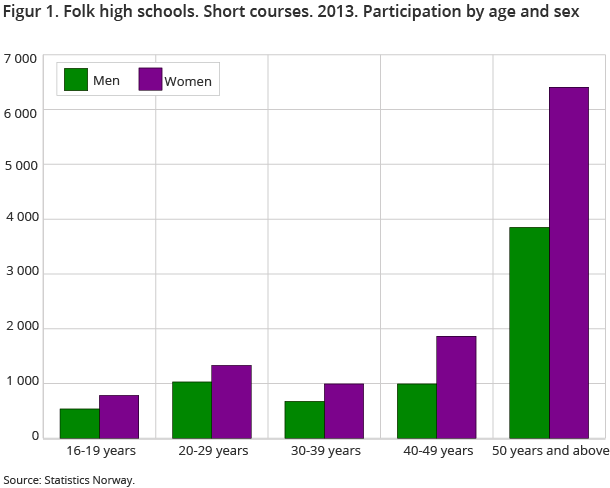 In 2013, the number of participants on the various short courses at folk high schools was 18 500. There have not been any significant changes in participant numbers over the years. There was a slight reduction of about 1 per cent compared with 2012. The gender distribution has also been stable over the years, with about 60 per cent female participation.

Norwegian folk high schools offer a wide variety of short courses. The most popular courses in 2013 were Aesthetic subjects and Handicraft, which had about 6 900 participants, and 40 per cent of the participants were women aged 50 years and over. Social sciences, Humanities, philosophy and ethics, and Health, social and sports subjects also had more than 2 400 participants each. Organisation and management is a popular field of study for both men and women and had almost 1 100 participants in 2013.