Economic forecasting is an important planning tool for individuals, businesses and the authorities. Independent forecasts with free universal access are beneficial to society, and form part of Statistics Norway’s social mission to produce macroeconomic forecasting.

Economic forecasting is an important planning tool for individuals, businesses and the authorities. Independent forecasts with free universal access are beneficial to society, and form part of Statistics Norway’s social mission to produce macroeconomic forecasting.

The term ‘projection’ is used in relation to any forward-looking calculation, including improbable scenarios, while a ‘forecast’ is a prediction of the future condition of the economy that is considered most likely at the time the forecast is made.
The terms used in the economic trend publications are largely based on the terms in the national accounts, see https://www.ssb.no/en/nasjonalregnskap-og-konjunkturer/concepts-and-definitions-in-national-accounts

Statistics Norway has been publishing macroeconomic forecasts for more than 30 years. The Economic trends articles describe the economic situation in Norway and abroad and give estimates of the main economic variables for the current year and the three subsequent years.

The forecasts are mainly prepared by researchers in the research department. There is a strong focus on transparency in relation to the assumptions underlying the forecasts, which are produced using the empirical macroeconomic model KVARTS. This model is based on national accounts data and financial behaviour, and is updated with new data on an ongoing basis. Using such a macroeconomic model ensures that the forecasts for the many variables are consistent with each other and with economic theory. Sensitivity analyses describing how changing assumptions affect the forecasts are often performed for the economic trend articles. Forecasting therefore also helps to shed light on the functioning of the economy.

Forecasting is an important planning tool (see also fact box). Households’ choices will often be based on expectations of developments in macroeconomic conditions such as interest rates, wages, house prices and unemployment. For example, a household that is considering buying a house would find it relevant to calculate the burden that interest charges is likely to represent.

Companies will not only be interested in general macroeconomic developments, but in price and cost trends and demand. The picture that companies have of the market situation dictates whether they recruit more workers or invest in new production equipment.

When negotiating wages, employers and trade unions are interested in inflation rates and unemployment levels.

The ongoing monitoring of economic cycles is necessary for ensuring that other parts of Statistics Norway’s social mission are also carried out. The Government uses KVARTS in its work on the national budget, and the Ministry of Finance receives an updated model and forecasts after each economic trends publication. The Ministry of Finance then compiles its own forecasts for the Norwegian economy.

In the 1990s, Statistics Norway signed an agreement with the Storting’s Finance Committee and the Ministry of Finance to carry out macroeconomic calculations for an alternative national budget for the parties in parliament, see for example Statistics Norway’s calculations of the Frp party’s national budget proposal for 2013 (SSBs beregninger av Frps forslag til statsbudsjett for 2013 - in Norwegian only).

The projections are not subject to any particular statutory basis.

There are no EU regulations in this field.

Models are simplifications of reality, and they often only capture a few key mechanisms. This also applies to the macroeconomic model KVARTS that is used in the work on economic trends. Each year, the Norwegian publication on the economic outlook (Økonomisk utsyn) reviews the accuracy of the forecasts for the previous year. In addition, an analysis is made of the uncertainty in the estimates for mainland GDP, the consumer price index and the unemployment rate measured by the Labour Force Survey, based on the forecasts that Statistics Norway has published since 1991.

Documentation for the KVARTS macroeconomic model (in Norwegian) 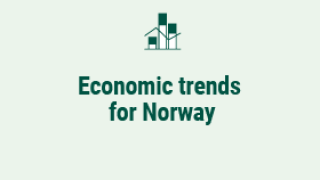 Article / 3 September 2021
The economy is improving, but the crisis is not over
The reopening of society is well underway, and the upswing in the Norwegian economy continues. The COVID-19 pandemic will nevertheless continue to impact on the economy for a long time to come. The key policy rate is expected to increase gradually to 1.75 per cent in 2024.