The police and prosecution authority registered 318 600 offences in 2017. This is the lowest number in the 25-year history of the statistics. However, there were more reports of sexual abuse against children.

The decline in the number of violations reported annually in the last decade is characterised by the sharp reduction in property thefts, as shown in Figure 1. A similar development is also seen in victimisation surveys.

In the last four years there has also been a marked decline in registered drug offences. The low number of violations reported in 2017 also correlates with last year's 7 per cent decline in other offences for profit and traffic offences, as well as almost 4 per cent fewer public order and integrity violations. However, there were more reported cases of violence and maltreatment and sexual offences in 2017 than the year before. 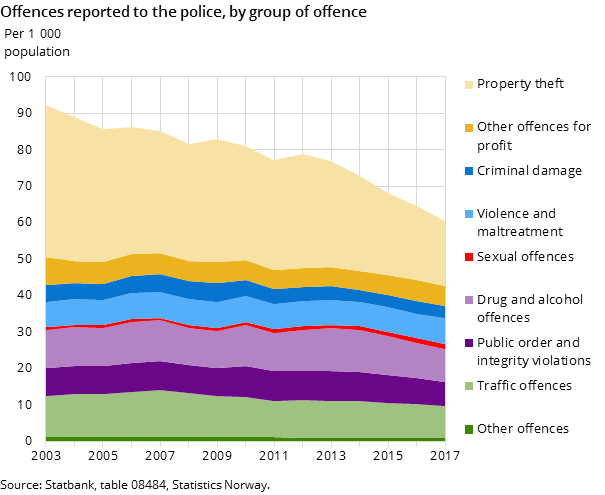 In 2017, 94 900 property thefts were reported, which is almost ten per cent less than the year before and half of the level around the turn of the millennium. According to Statistics Norway’s classification of offences, 12 000 of the thefts in 2017 are classified as minor theft and 10 000 as gross theft.

Following the introduction of the new Penal Code in 2015, there are several breaks in the time series for the crime statistics, especially for several specified types of theft. Nevertheless, the figures tell us that from 2016 to 2017 there was an actual decrease for several of the main types of theft.

Figure 2. Thefts reported, by type of thefts. Per 1 000 population

The number of reported drug and alcohol offences as well as traffic offences is significantly affected by control and patrol operations. Compared to 2016, the first year following the police district reform, there was a 6.7 per cent decline for both these main groups.

Reported drug and alcohol offences have had a downward trend in recent years, and from 2013 the decline is 21 per cent. There are also significantly fewer reported disturbances. Among other types, the 2 390 reported cases of breach of the peace under self-induced intoxication are 18 per cent less than the year before, and 42 per cent lower than in 2013.

During the previous two years, there was an increase in both registered incidents and victims for most types of sexual offences. The increase in reported incidents in 2017 is instead primarily a result of the police registering far more sexual offences related to depictions of children and young people under 18 years old. This type of offence is grouped in the statistics under ‘Other or unspecified sexual abuse’, where there were 820 more incidents in 2017 than in the previous year.

There was also a marked increase in reported cases of sexual intercourse with children under 14 years, which in the new Penal Code is classified as rape. In 2017, 790 such rapes (including aggravated) were recorded, which is 17 per cent more than the year before. In 56 per cent of the reports, the rape had taken place more than a year before the incident was registered by police, and it is mainly these older offences that have increased in the reports over the last couple of years.

More violence and maltreatment than in the previous three years

Compared with the year before, the largest increase in violent offences was amongst non-physical offences, i.e. threats and other reckless behaviour and stalking. In total, 14 600 such offences were reported in 2017, which is 9.9 per cent more than the year before.

Of physical offences of violence, 12 600 assaults were reported, which is 2.2 per cent more than in 2016. However, the 2 100 cases of the more serious type of physical violence, bodily harm, is less than in previous years.

The police registered 3 700 cases of maltreatment in close relations during 2017, which is 8 per cent more than in 2016. Following the legislative changes and the first registrations of this type of violent crime in 2006, the number of such reports has increased significantly, as illustrated in Figure 3. In particular, the statistics on victims have shown that this trend has occurred both due to changes in legislation, new registration practices and increased reporting of this type of abuse to the police. In 2017, three out of four reported situations of maltreatment had taken place up to one month before the report, and it was mainly the increase in cases that had taken place recently that pushed up the number of reported cases of maltreatment in close relationships in total compared to 2016.

As shown in Figure 4, Oslo and Finnmark have the highest levels of reported violent crime, with 10.8 and 9.7 cases per 1 000 inhabitants respectively in 2017. For both these counties, this is on a par with the previous year and somewhat lower than in the period 2010-2013. 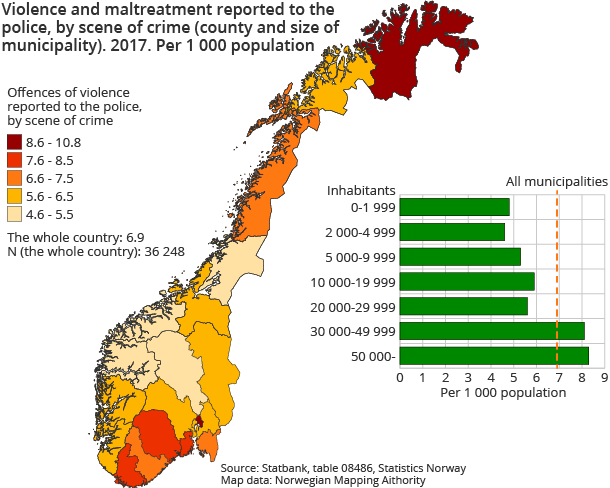 Compared with the previous year, Akershus is the county with the largest increase in reported violence and maltreatment. The 3 500 registered cases in 2017 are 20 per cent more than the previous year. The increases in both Nord- and Sør-Trønderlag are also considerably larger than in the other counties, and the changes in these three counties are, in total, equivalent to more than half of the increase in registered violence throughout the country. However, the level of reported violence and maltreatment is still lower in Akershus and Trøndelag than in the rest of Norway.

On 1 January 2016, Norwegian police were organised into new regional districts, where 27 police districts were reduced to 12. The internal process of organising the new districts will be executed gradually during the course of 2017 and 2018, but as of year 2016, Statistics Norway will only release statistics by the new police districts in StatBank.

Statistics Norway is now releasing statistics according to the new Standard for types of offence. Types of offence 2015 was drawn up as a consequence of the penal code of 2005 and the new police codes for registering offences coming into effect on 1 October 2015. The standard includes new groupings of both Type of offence and Group of offence, while the offence categories crime and misdemeanour have been discontinued. The new classification of offences is available in StatBank for figures dating back to 2003. The old classification is still available for figures from all years up until 2014. A detailed overview, including how this corresponds to the police codes for offences, is now available in Statistical Classifications and Code Lists. 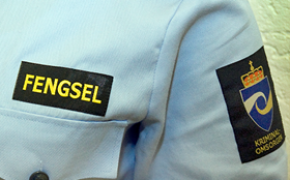