In 2016, 336 500 offences were reported to the police. This was 4.3 per cent fewer than the year before, and a decline of as much as 9.6 per cent from 2014. If we factor in the population growth, this level of reported offences is by far the lowest in the 24 years of these statistics.

In 2016, 64.5 offences were reported to the police per 1 000 population. As shown in figure 2, far fewer property thefts are registered than in earlier years, and the 20.2 property thefts per 1 000 population in 2016 represents half the level of 2003. Furthermore, there has been a significant decrease in reported drug and alcohol offences during the last two years, which is also a contributing factor to the level of reported crime in 2016 being the lowest ever registered in these kinds of statistics. 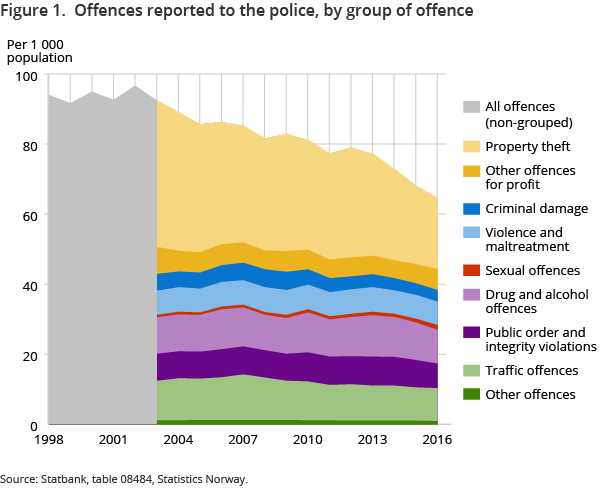 The police and prosecution authority registered just over 105 100 property thefts in 2016. Among these, 69 200 registered thefts made up two thirds, while the 17 200 incidents of aggravated theft made up a share of 16.5 per cent. There were also nearly 13 600 petty thefts registered. 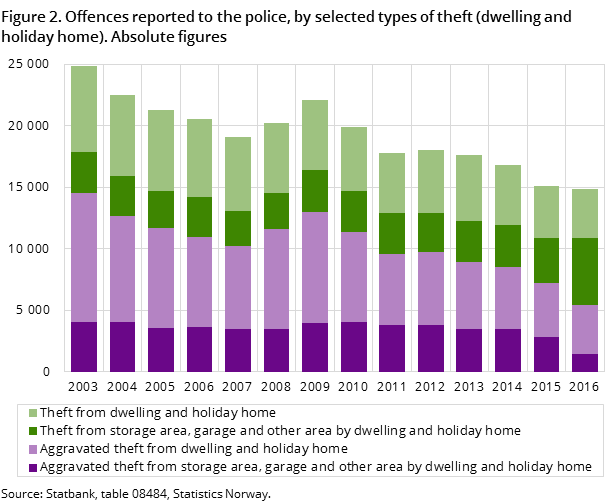 In 2016, 7 900 thefts and 2 100 aggravated thefts from – as well as nearly 4 500 thefts of – cars and other motor vehicles were reported to the police. The number of these kinds of motor vehicle-related thefts has seen a decrease of 16 per cent from the year before. Furthermore, 14 800 thefts (incl. aggravated thefts) were registered from dwellings and holiday homes. As shown in figures 2 and 3, the declining trends observed for these types of thefts over time have thus continued, and the number of such thefts is now 39 200 and 10 000 fewer than in 2003 respectively. 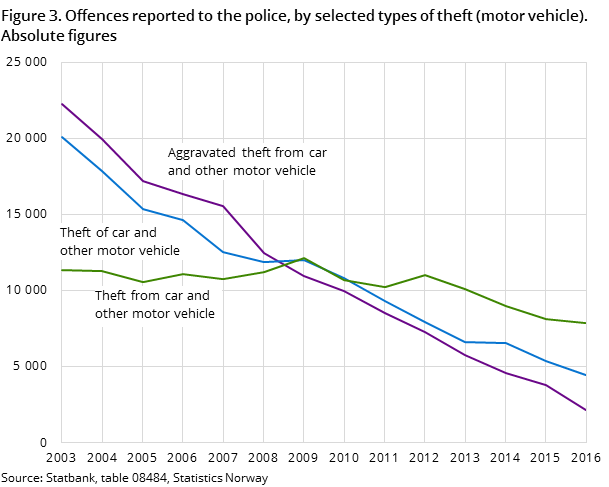 The decrease in thefts of and from motor vehicles – together with thefts from dwellings and holiday homes – make up nearly 60 per cent of the total decrease of 85 100 property thefts since 2003.

Better statistics on theft from 2016

As of 2016, the new police codes for registering offences has made it possible for Statistics Norway to classify theft by more new types, which among other things enables better analyses of thefts from the person. In 2016, for example, nearly a third of almost 31 000 thefts from the person (incl. aggravated thefts) happened in a shop or other sales outlet, while nearly one in five occurred on public transport. Furthermore, nearly 17 per cent of these types of thefts happened in a street, park or at other recreational areas.

Since the new Norwegian penal code came into effect, there seems however to have been a partial redistribution from aggravated thefts to “ordinary” thefts. This is particularly evident for thefts from the person, which in 2016 saw a considerably smaller share of aggravated thefts than in most previous years. This may partly be a result of the new provision about aggravated theft in the penal code, which has not continued the former legal wording that emphasized whether or not the theft had happened “from the person at a public place”. For more information, see also text box and article about New crime statistics (in Norwegian only).

One out of four property thefts happened in Oslo 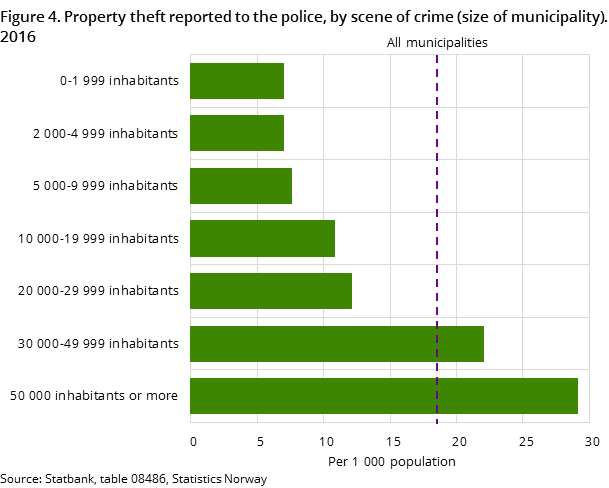 According to the new classification of offences, just over 31 000 offences were registered as part of the group of crime other offences for profit. Among these economic types of offences, nearly 21 400 – or close to seven out of ten – were frauds, while more than 7 per cent were receipts of stolen property. The police and the customs authority also registered nearly 2 000 violations of the Customs Act.

One in six offences of violence were maltreatments in close relations

In 2016, close to 35 000 incidents of violence and maltreatment were reported to the police. Of these, there were almost 20 000 offences of violence – which in principal include physical violence. The 12 300 registered assaults represented an increase of nearly 5 per cent from 2015, while the 2 200 reported incidents of the more serious violent offence bodily harm saw a slight increase from the year before. In 2016, 27 murders were registered.

A total of 8 600 threats were also reported, of which 328 were considered aggravated threats. Furthermore, 4 650 incidents of reckless behaviour and stalking were reported, and a total of 810 robberies (incl. aggravated robberies). 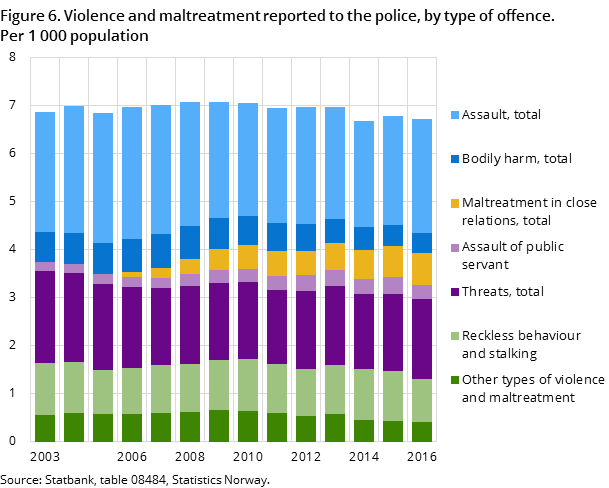 Slightly lower level of violence in the last three years

Highest level in Oslo and Finnmark 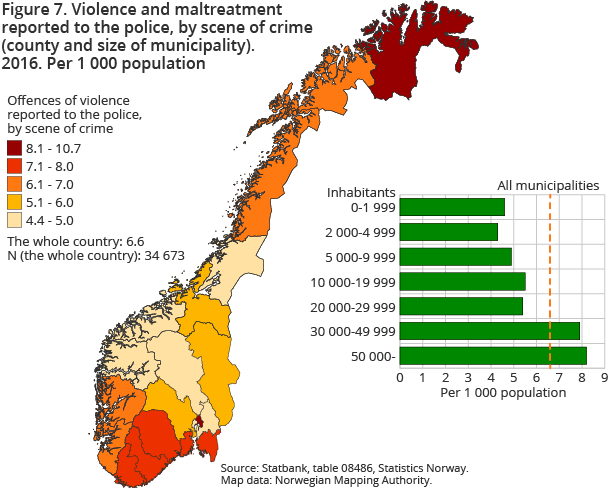 In total, 53 300 drug and alcohol offences were reported in 2016. Among these, narcotic offences made up more than 70 per cent, while the 9 900 incidents of driving under the influence corresponds to almost one fifth. Additionally, 1 800 doping offences were registered during 2016, which constitutes an increase of 19.5 per cent from the year before. 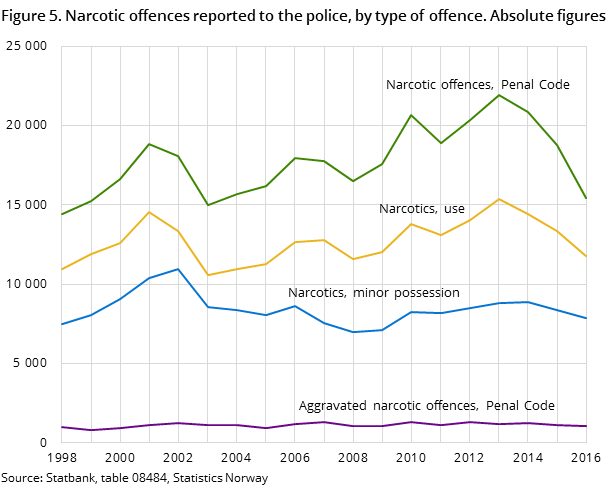 In 2016, almost two thirds of integrity violations reported to the police were various types of document and ID offences. From 2016 and onwards, Statistics Norway’s classifications include unlawful handling and use of another’s identity or proof of identity as separate types of offences. In 2016, 2 100 and 470 of such ID offences were registered respectively.

Nearly 7 100 sexual offences were reported in 2016, which is 24 per cent more than the year before and an increase of as much as 48 per cent compared to 2014. This is mainly due to the 2016 increase in reported rapes, sexual acts and sexually abusive behaviour.

In total, 2 235 rapes were reported in 2016 – based on how rape is now defined in the penal code and in Statistics Norway’s crime statistics. One significant change in the new penal code – and thus in Statistics Norway’s classifications – is that what was formerly defined as sexual intercourse with children under 14 years of age is now classified as rape. In 2016, there were 674 reported rapes of children under the age of 14 (incl. aggravated rape). A total of 1 561 rapes were also reported with an unknown or unspecified age, which is comparable to the number of rapes according to the classification in the crime statistics until 2014. This includes 68 aggravated rapes.

In 2016, 1 300 sexual acts and 1 500 incidents of sexually abusive behaviour were also reported to the police. In total, there were 1.4 sexual offences per 1 000 population, and the level of sexual offences in 2016 is by far the highest registered with these type of statistics.

Statistics Norway now releases statistics by new Standard for types of offence. Types of offence 2015 is made as a consequence of the penal code of 2005, together with new police codes for registering offences, came into effect on 1 October 2015. The standard includes new groupings of both Type of offence and Group of offence, while Category of offences (crime and misdemeanour) is not continued. New classification of offences is made available for certain tables in StatBank with figures dating back to 2003. Group of offence 2015 and Type of offence 2015 are included in the existing tables. A detailed overview, including relation to the police codes for offences, is now available in Statistical Classifications and Code Lists.

On 1 January 2016, Norwegian police were organised into new regional districts, where 27 police districts were reduced to 12. The internal process of organising the new districts will be executed gradually during the course of 2017 and 2018, but as of year 2016, Statistics Norway will only release statistics by the new police districts in StatBank.