In 2016, 47 percent of all offences reported to the police are registered with persons as victims, and fewer offences are registered against both persons and enterprises than in all previous years of the statistics on victims. The levels of both of these victim types are mainly influenced by the large decrease in property theft reported to the police. Property theft now makes up half of all offences both with persons and enterprises as victims. The number offences without registered victims is also lower than in all previous years, and the variations for such offences is largely connected to police reported offences, especially traffic and drug and alcohol offences.

Figure 1. Offences reported to the police, by type of victim and group of offence. 2016

In 2016, 149 000 persons were registered as victims of 159 500 offences. This equals 2.9 per cent of the Norwegian population reporting being a victim of an offence in 2016. When we account for the population growth, the level of persons victimised of crime has been reduced by more than one fourth since 2004.

The lasting trend of large decreases in the number of persons being victimised of property theft continued in 2016. The number of property theft victims was nearly 10 per cent lower than the year before and as much as 22 per cent lower than in 2014. The total number of victimised persons thus decreased further in 2016. The decrease was prolonged even though 14 per cent more victims have been registered in the remaining groups of offences since 2014. For example, 6 500 more persons were victimised of fraud, based on the way this type of offence is defined in the new crime statistics. Also for sexual offences reported to the police, far more victims were reported than in previous years.

Statistics Norway now publishes figures by the new Standard for type of offence. Type of offence 2015 is made on the back of the implementation of the Penal Code of 2005, and new police codes for registering offences, into the police registers from 1. October 2015. The standard includes new groupings of both Type of offence and Group of offence. The previous standard for Category of offence – which divided offences into crimes and misdemeanours – cannot be continued after 2014. For the statistics on Victims of offences reported to the police, the new groupings of offences are now made available in the Statbank with retrograde figures, as an addition to the already published figures by the standards and penal codes which were in effect up to and including 2014. The new grouping of Group of offence 2015 and Type of offence 2015 is included in the existing tables of victims of offences reported to the police back to 2004, and back to 2009 for the tables with breakdowns by victimisation in own place of residence. A detailed overview of previous and new standards for the classification of offences, including lists of police codes for offences, are now available in Code lists and classifications. See also definitions in About the statistics.

The change in legislation, registration and classification of crime in Norway in 2015, results in partial breaks in the time series where there are breakdowns by type of offence. This is unevenly so for the different crime statistics and different types of offences, and brings about certain extra challenges for those utilising the new statistics.

Of the victims of theft in 2016, 13 900 were victims of theft from dwelling and holiday home (incl. aggravated thefts), which is 2.6 per cent less than the year before. The nearly 3 600 victims of motor vehicles thefts, and the 8 000 thefts from car and other motor vehicles (incl. aggravated thefts), make up a total decrease of 16 per cent from the year before. Thus, the large decrease these types of thefts have had since 2003 continues.

Most thefts in populous municipalities

From the offences reported to the police, a total of 14.7 persons were reported as victims of property theft per 1 000 population in 2016. Both for men and women, persons in all ages and in nearly every county of residence, the level of persons registered as victims of property theft is lower than in all previous year of the victim statistics. As shown in figure 3, it is still so that the risk of being victimised of such offences increase with the number of inhabitants in the municipality. Among theft victims residing in municipalities with more than 30 000 inhabitants, seven out of ten were victimised in their own municipality of residence. However, the majority of theft victims residing in municipalities with less than 10 000 inhabitants were victimised in other places than in their own municipality 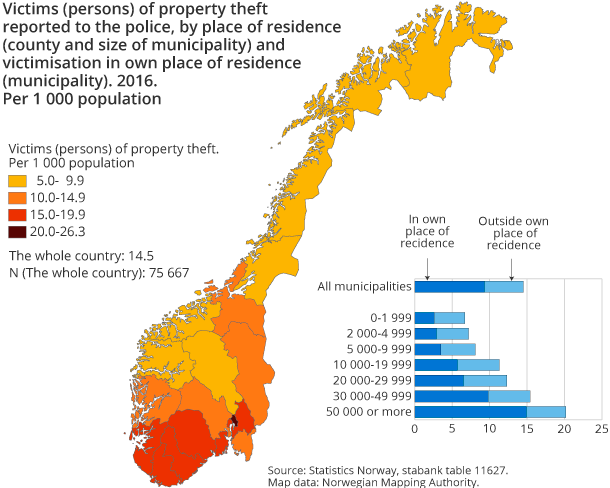 More children among victims of violence

A total of 30 700 persons were registered as victims of violence and maltreatment in 2016. This is some more than the year before, but when taking the population into account, the relative level of offences of violence has been stable over time. From the principal offence, the 10 000 persons exposed to assault is nearly 8 per cent more than the year before, while the 2 200 persons victimised of the more serious type of offence bodily harm were just about level with 2015. In 2016, 27 persons were registered as victims of murder – 16 men and 11 women. 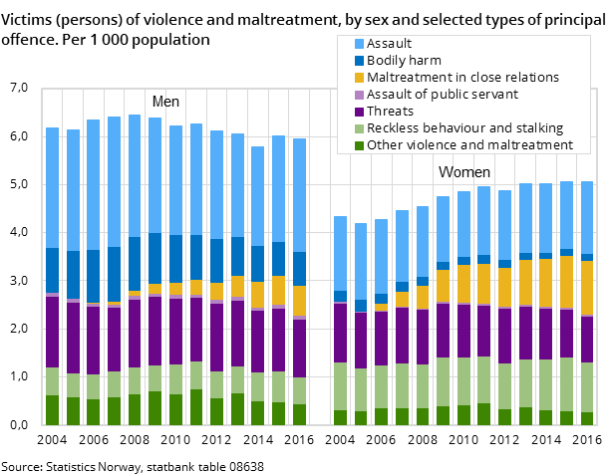 I 2016, more than 5 400 victims of sexual offences were registered. This is 52 per cent more than the annual average for the years 2010-2014, and from the residences of the victims, the percentage wise increase was large in all counties.

In 2016, a total of 2 150 victims of rape were registered, after the new definitions in the statistics. This is 43 per cent more than the five-year period before the new penal code came into effect. The number of victims of sexual intercourse with children aged 14-15 increased by 12 per cent. By the principal offence, there were 1 100 victims both for sexual act and sexually abusive behaviour. For these somewhat less serious sexual offences, the increases were far bigger – 75 and 64 per cent respectively.

By the principal offence, 4 460 women and 975 men were victims of sexual offences in 2016. This is 1 350 more women than in annual average in the period 2010-2014. The number of men is doubled in the same period, and for most types of sexual offences, the increase in percentage was larger among men than women. The share of men among the victims of the sexual offences reported to the police thus increased from 13 to 18 per cent.

A comparison between the police reported crime in 2014 and 2016 suggests that part of the increase is due to a higher rate of reported abuse happening further back in time. For example, in 2016, there was a 90 per cent increase in victims of a sexual offence which had taken place more than one year before the offence was reported to the police. The corresponding increase for sexual offences happening within one year was 37 per cent.