2017 saw a continued decline in victims of offences, but more children under 15 years of age were registered as victims of violence and maltreatment and sexual offences.

In total, 140 000 different persons were registered as victims of 151 000 offences during 2017, according to new figures from the statistics Victims of offences reported to the police. This corresponds to 2.7 per cent of the Norwegian population reporting to be victims of an offence. This crime victimisation rate is 6.6 per cent lower than the year before and a fall of almost a third since 2004, when these victim statistics began.

Over time, the major trends in crime statistics are particularly impacted by the decline in control-based reports and by the development in reported property theft. In 2017, 12.9 victims of property theft were registered per 1 000 population, which is 12 per cent less than the year before, and represents a decrease of more than 50 per cent since 2004. As shown in figure 1, the big decrease in property theft is the main reason that the crime victimisation rate is at its lowest since records began.

1 Including Drug and alcohol offences.

Fewer victims of all main types of theft

From the principal offence, 65 800 persons were registered as victims of theft in 2017, of which 1 050 and just over 8 000 were victims of petty and aggravated theft respectively. Aggravated theft made up a share of 12 per cent, which is a significantly smaller share compared to previous years. This is partly due to the new penal code of 2015 coming into effect, which brought about a partial change in which types of thefts are considered to be aggravated. Furthermore, the new penal code also led to several breaks in the crime statistics time series.

As shown in figure 2, 2017 saw fewer persons registered as victims of all main types of theft, compared to the year before. When including aggravated thefts, 24 700 persons were victims of theft in different public places, while 12 700 persons reported being victims of theft from dwellings and holiday homes. This was nearly 13.5 and 8.6 per cent fewer than in 2016 respectively. Concurrently, the trend of fewer people reporting thefts from and of cars and other motor vehicles continued. The 10 600 victims of these types of thefts correspond to a 9 per cent reduction from the year before, and it represents a decrease of nearly 74 per cent from 2004.

The crimes they are a-changing – majority no longer theft victims

When put together, victims of other offences for profit, violence and maltreatment and sexual offences made up more than a third of all victims in 2017. In 2004, the corresponding share was 18 per cent, and – as illustrated in figure 3 – these types of offences now make up a significantly bigger share of the offences that the population reports being victims of. 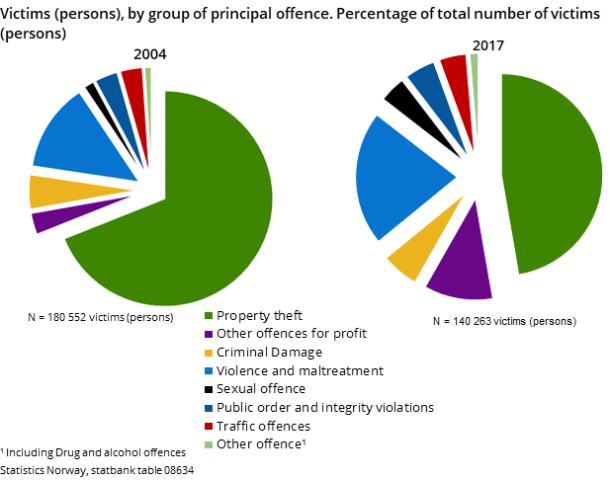 Compared to 2014, 4 800 more victims of other offences for profit were registered in 2017, which mainly consists of victims of fraud. In the same period, 4 500 more persons reported being victims of violence and maltreatment or sexual offence, which included 2 600 more children under the age of 15. In total, nearly 8 100 children in this age group were registered as victims of these types of offences in 2017. Thus, the number of children under 15 years who were victims of violence and maltreatment or sexual offences was far more than in all previous years of victim statistics.

Young adults are most exposed to violence – but less than before

In total, 32 200 different persons were registered as victims of violence and maltreatment in 2017, according to the classifications in Statistics Norway’s crime statistics. This is an increase of 5 per cent from the year before, and by county of residence of the victim also an increase in most counties. Three out of four victims of violence and maltreatment report being exposed to violence within their own municipality of residence. 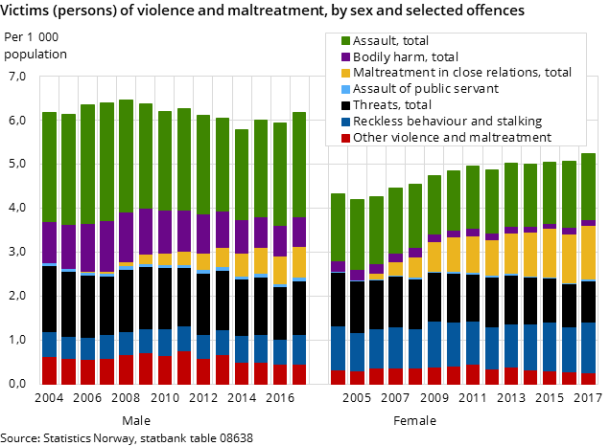 In 2017, nearly 2 200 persons were registered as victims of rape, according to the current definition of rape in the penal code and the crime statistics. The number of rape victims is level with 2016, but as much as 45 per cent more than the average number from the five-year period before the new penal code came into effect in 2015. In 2017, 1 150 persons were victims of a sexual act, which is the same number of persons registered as victims of sexually abusive behaviour. For both of these types of sexual offence, this was a minor increase from 2016.

Compared to the average in the five-year period before the introduction of the new penal code, the number of victims of sexual offences in 2017 represented an increase of nearly 61 per cent. The increase – both from the last few years and over time – corresponds with more persons being victims in childhood and early adolescence than in previous years. This trend has contributed to 70 per cent of the victims of sexual offences in 2017 being under 20 years of age.

Statistics Norway is now releasing statistics according to the new Standard for types of offence. Types of offence 2015 was drawn up as a consequence of the penal code of 2005 and the new police codes for registering offences coming into effect on 1 October 2015. The standard includes new groupings of both Type of offence and Group of offence, while the offence categories ‘Crime’ and ‘Misdemeanour’ have been discontinued. The new classification of offences is available in StatBank for figures dating back to 2004. The old classification is still available for figures from all years up until 2014. A detailed overview, including how this corresponds to the police codes for offences, is now available in Statistical Classifications and Code Lists.