Weaker mainland-GDP growth in the final months of 2019

The growth rate of the gross domestic product of mainland Norway (excluding overseas shipping and petroleum) was 0.2 percent in the 4. quarter, following moderate growth in the preceding three quarters. Annual growth was 2.3 percent in 2019 (2.2 percent in 2018).

Following relatively steady growth since the second half of 2018, manufacturing output levelled out the last few months and grew by only 0.2 percent in the 4. quarter, according to figures from the  National accounts.  Most manufacturing sectors saw weak growth, but a high level of activity in oil platform construction contributed positively. For the whole year, manufacturing output was 3.2 percent higher than in 2018, thanks to the robust growth throughout the winter and spring last year. 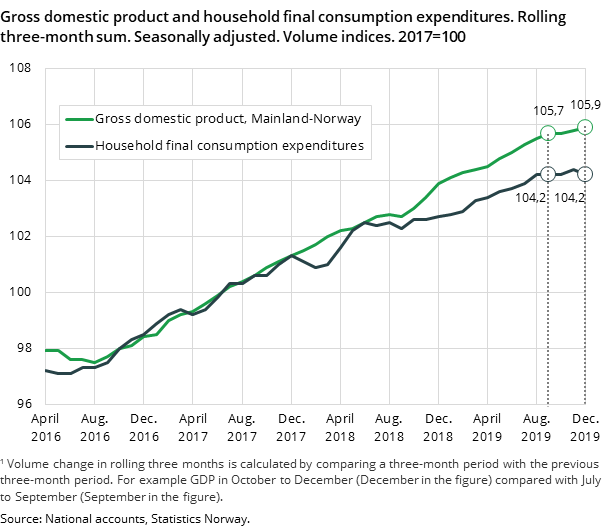 The service industry overall grew throughout 2019, but at a lower rate towards the end of the year. From 2018 to 2019, output in services increased by 2.8 percent. Many service industries saw a positive development, with service activities incidental to oil and gas extraction a notable contributor.

Production of goods excluding manufacturing and mining fell by 1.2 percent in the 4. quarter. This is largely attributed to lower activity levels in electricity production and fishing.  On the other hand, the construction sector saw continued growth, but again, this growth abated somewhat towards the end of the year.

Following a decrease in the previous four quarters, the gross product of the petroleum and overseas shipping sectors increased by 11.2 percent in the 4. quarter. Commencement of operations on the Johan Sverdrup oil field led to strong growth in oil production, starting in October. This contributed to total GDP’s (i.e., including petroleum and overseas shipping) increasing by 1.6 percent in the 4. quarter. For 2019, total GDP increased by 1.2 percent.

Household consumption remained the same from the 3. to the 4. quarter, which is mainly due to a 0.7 percent fall in the consumptions of goods. Growth was weak throughout 2019, and especially in the second half of the year.

Consumption of services grew steadily throughout the year and grew by 0.8 percent in the 4. quarter. Among many contributors, there was strong growth in culture and leisure services. Household consumption abroad also contributed to increase overall consumption.

Investments in the petroleum sector continued to increase in 2019. Preliminary national account figures show that the investments increased by 13 percent in 2019 and by 5.5 percent in the 4. quarter.

Investments in government increased by 6.9 percent in 2019. They were 1 percent lower in the 4. quarter than in the 3. quarter, but this is related to the Air Force’s receiving three fighter jets in the 3. quarter and none in the fourth quarter.

Exports of goods and services increased by 6 percent in the 4. quarter. This increase is primarily driven by increased exports of crude oil and natural gas, but this has to be seen in the context of offshore maintenance work as well as the opening of the Johan Sverdrup field in the 4. quarter. Total exports of crude oil and natural gas fell for the second consecutive year. Nevertheless, total exports increased by 1.5 percent in 2019 thanks to increased exports of services and non-petroleum goods.

Preliminary estimates show that seasonally adjusted employment increased by 0.2 percent, or 6,800 persons in the 4. quarter. There were more than 46,100 more employed workers in 2019 than in 2018. Productivity, measured as gross product per hour worked, is estimated to have increased by 0.6 percent in 2019, the same growth rate as in 2018.

The National Accounts recently published an article about the revisions in the monthly national accounts.