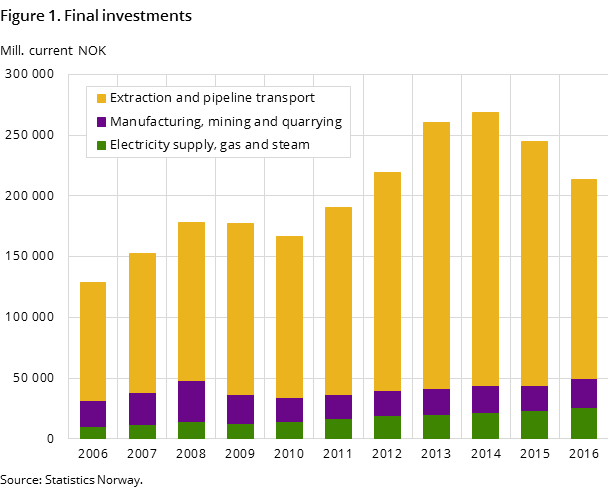 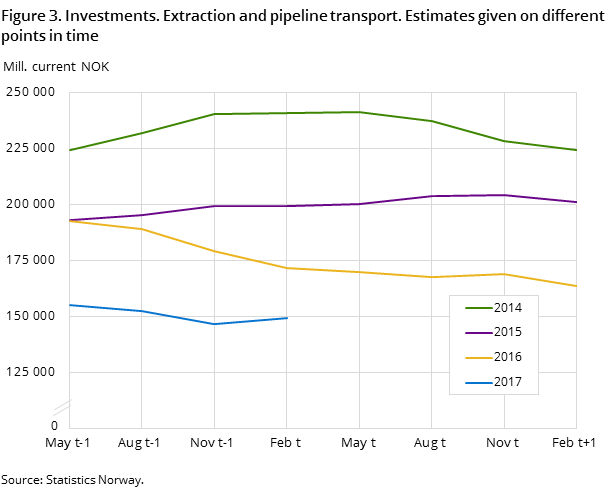 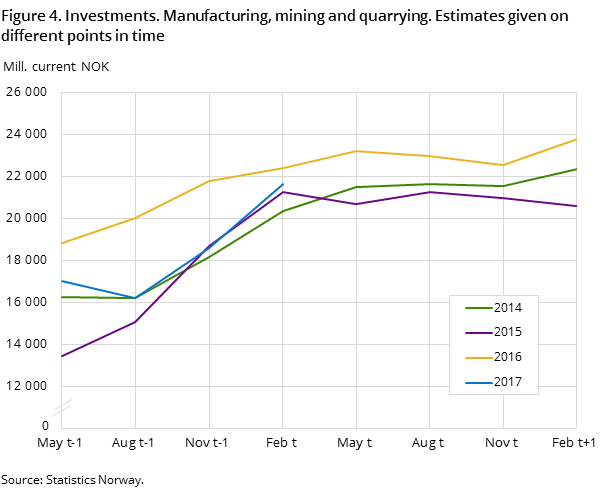 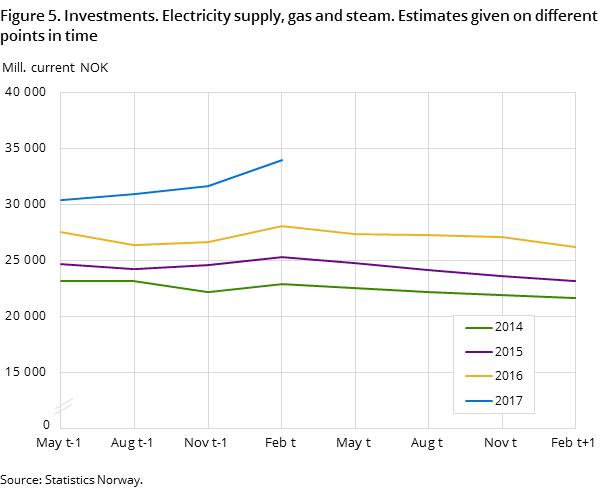 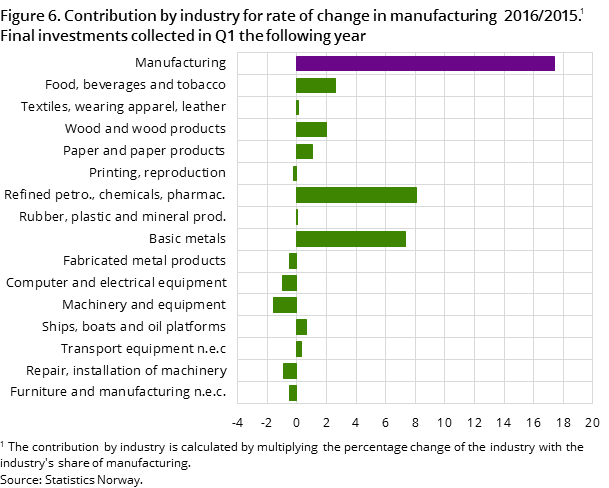 Final investments in 2017 covering oil and gas, manufacturing, mining & quarrying and electricity supply amounted to NOK 205 billion, measured in current value. This is 4.1 per cent higher than the corresponding figure in the 4th quarter of 2016. The estimate is, however, 7.8 per cent lower than the corresponding figure for 2016 given in the 1st quarter of 2016. The decrease is clearly smaller than in the previous survey, which indicated a decline of 13.5 per cent from 2016 to 2017. The decrease in 2017 is driven by the ongoing decline in investments in oil and gas. The estimate for manufacturing in this survey increases significantly, such that manufacturing investment now seems to only contribute marginally to the decline in 2017. Higher estimates in the electricity sector contribute to a lower total decline.

Total investments in oil and gas, manufacturing, mining and electricity supply in 2016 amounted to NOK 213.4 billion, which is 2.5 per cent lower than projected in the previous survey. The investment level is 12.9 per cent lower than the corresponding figure for 2015. The fall can be attributed to a decline of 18.8 per cent in oil and gas. The decline was mitigated by higher investments in manufacturing and electricity supply, which increased by 17.4 and 13.4 per cent respectively from 2015 to 2016.

According to seasonally-adjusted figures, oil and gas fell by 2.8 per cent in quarterly final investments from the 3rd to 4th quarter of 2016. In the same period, manufacturing had a quarterly increase of 5.3 per cent, while electricity supply increased by 1.2 per cent.

The investments in oil and gas extraction and pipeline transport for 2017 are estimated at NOK 149.4 billion. This is 1.9 per cent higher than the previous estimate for 2017. The increase is mainly due to higher estimates for field development, fields on stream and shutdown and removal. Exploration wells and removal projects originally planned for 2017 have now been postponed. The increase in field development is partly due to the delivery of a new plan for development and operation (PDO) earlier this winter.

Projects within shutdown and removal originally scheduled for the 4th quarter of 2016 have been postponed to the present year, and also contribute to the upward adjustment in 2017. The increase compared to the previous estimate for 2017 has been moderated by a further decrease in the estimate for exploration. Some exploration wells, which were originally planned for the present year, have now been removed from the budgets.

All investment categories except pipeline show a decrease compared to corresponding estimates for 2016. The main contributions are from fields on stream .The decrease is also significant within the categories shutdown and removal, field development and onshore activities.

Significant decrease in oil and gas investments in 2016

Total investments in oil and gas extraction and pipeline transport for 2016 were NOK 163.3 billion. This is NOK 37.9 billion, or 18.8 per cent lower than final investments in 2015. All investment categories show a decrease, but fields on stream, exploration and field development are the main contributors.

The strong rise in the investment level from 2010 to 2014 was driven by high and relatively stable crude oil prices during this period. The persistent high oil prices generated many new developments and projects for increased recovery and a very high drilling activity within both exploration and production. This resulted in elevated demand for products and services from the suppliers, which in turn boosted the prices of the input factors in the oil industry. Consequently, there are reasons to believe that increased unit costs accounted for considerable parts of the investment growth in this period, especially in 2013 and 2014. The decreased investments in 2015 were mainly driven by cost-cutting campaigns by oil companies. The fall was reinforced by the sharp decrease in oil prices from around autumn 2014. The persistent low oil prices contributed to the further sharp decrease in the investments in 2016. Because price adjustments are slow, there is reason to believe that the prices of input factors in the extraction business did not decrease until 2016, and will further decrease in the present year. Thus, the decrease in real investments in 2016 and 2017 is presumably lower than the nominal decrease.

New record high level of investment in electricity supply for 2016

Actual investments in electricity supply reached a record high level in 2016, amounting to NOK 26.2 billion. This is 13.4 per cent higher than the corresponding figure for 2015. A high level of investments in production of electricity and transmission and distribution stood behind the growth. Growth in production of electricity is partly attributed to the development start of several wind farm projects. The increase in transmission and distribution is related to upgrading of power grid and the installation of new electricity meters (AMR). Investments related to transnational transmission cables also explain some of the growth. For further information, see this article Kraftinvesteringer i støtet, available only in Norwegian.

…and investment growth in electricity supply continues in 2017

The decline in these industries is linked to lower investment activity in the oil and gas industry.

Lower investment estimate for manufacturing in 2017

The enterprises' estimates for 2017 indicate a negative outlook for the industry in the current year with an estimate of NOK 21.1 billion. This is a 3,0 per cent decline compared with the corresponding estimate for 2016. This is, however, a significant upward revision compared to the estimate for 2017 given in the previous quarter.

The decline indicated from 2016 to 2017 was mainly due to a high level of investment in the grouping refined petroleum, chemical and pharmaceutical industries in 2016. Some major projects in this industry group are either completed or is entering a final phase in 2017. At the same time high investments within basic metals and the food industry is contributing to maintain a relatively high level of investments.

Continued fall in mining and quarrying in 2016

Final investments for mining and quarrying in 2016 amounted to NOK 610 million. This represents a decline of 28.7 per cent compared to the year before. The decline appears to continue in 2017.