The Norwegian economy has been experiencing a moderate economic upturn for just over a year. Although the upturn is expected to continue as a result of increased investments in the petroleum industry and an international upturn, the economic situation is fragile.

We expect global growth to remain above what we consider to be trend growth. According to our calculations, the recession among our trading partners will come to an end, and they will experience a boom at some point in 2019. Since our last report, however, the strength of the upturn has weakened, and the risk of a trade war is high. Combined with the trend for international capital flight (from emerging economies), a less stable political climate in Europe and the US sanctions policy, this creates significant downside risk in our international forecasts.

Decline in petroleum investments appears to be at an end

The manoeuvrability in fiscal policy is expected to be considerably reduced going forward, and we expect the growth in both public consumption and investments to be below the trend growth in the economy. However, the growth in welfare benefits is likely to increase as a result of the ageing population, which will lead to fiscal policy as a whole being roughly neutral, with the structural non-oil public deficit as a share of trend GDP for mainland Norway expected to remain more or less constant throughout the projection period.

A stronger krone is expected

The depreciating krone since 2014, in line with the fall in oil prices, has helped offset the effect of falling oil prices in the economy in real terms. Since the turn of the year, the krone has strengthened, and we assume that it will continue to appreciate moderately in the coming years. The stronger krone moderates the economic upturn by reducing the cost competitiveness of internationally exposed industries. In 2021, which is the last year in our projection period, it is assumed that one euro will cost around NOK 9.0, compared to the current NOK 9.5.

After several years of strong growth, house prices fell throughout most of last year. From the end of the year and during the first months of 2018, we see clear indications of a reversal in the house price development, and we now expect moderate house price growth going forward. The rise in house prices will be driven by higher incomes and a continued low interest rate, but will be curbed by a surplus of supply, lower population growth and, eventually, higher interest rates. The declining housing investment seen in the preceding two quarters will also level out before too long. In 2018, we estimate that housing investment will be about 9 per cent lower than last year. For 2019, we estimate a more or less unchanged housing investment. This will be followed by a moderate increase, and in 2021, housing investment will be about 4 per cent lower than the level in the peak year of 2017.

Key policy interest rate likely to rise in the autumn

Although the key policy interest rate has remained unchanged at a record low 0.5 per cent since March 2016, the three-month money market rate has risen slightly in 2018, and at the beginning of June, is almost 0.2 percentage points higher than at the start of the year. If our forecasts are accurate, Norway’s economic upturn will last for six or seven quarters before the key policy interest rate is put up. In line with the economic upturn, the key rate will rise gradually, but only to the point that the money market rate will increase by just over one percentage point over the next three years. The interest rate for credit lines is expected to be 3.7 per cent in 2021. Thus, the real interest rate will remain at historically low levels, continuing well into the forthcoming boom in the economy.

Higher investments are expected this year in the power supply industry, both through an increase in wind power generation and the distribution of electricity. In manufacturing, increased investments are expected, particularly in oil refining and chemical and pharmaceutical manufacturing. There will also reportedly be an increase in investments in the service sector, according to Norges Bank’s regional network. We estimate investment growth of around 5 per cent this year. Growth is subsequently expected to decline as a result of higher interest rates, a stronger krone and as the economic upturn matures.

Consumption growth will be moderate

Growth in household consumption is expected to rise following a weak first quarter, largely due to the large number of cars purchased in the second half of last year as a result of anticipated duty increases. Rising real income growth will boost consumption going forward, but weak developments in wealth will keep the annual growth rate well below 3 per cent in the years ahead. However, this will be enough to sustain growth in the mainland economy that is above trend growth.

After peaking at just over 5 per cent at the start of 2016, unemployment has now fallen to 3.9 per cent, according to Statistics Norway’s Labour Force Survey (LFS). This fall is observed in many parts of the country. As a yearly average, we expect unemployment of 3.9 per cent in 2018, with a further gradual fall to 3.7 per cent in 2021. In a historical perspective, this must be regarded as an almost normal level of unemployment. Throughout 2017, the proportion of the population in work levelled out, and is expected to increase going forward, mainly due to the improved economic situation.

Higher inflation in the short term

High energy prices and duty increases from the New Year have pushed up the growth in the consumer price index (CPI) much more than the growth in the CPI-ATE, and the disparity in the price measurements has increased over the first few months of the year. A cold winter followed by dry and warm weather has contributed to high power prices so far this year. In addition, higher oil prices and a strong US dollar have led to a significant increase in fuel prices. Our estimated development in energy prices and special duties shows CPI growth in 2018 of 2.5 per cent, which is 0.9 percentage points higher than the growth in the CPI-ATE. In 2019, CPI-ATE growth is expected to be 1.7 per cent, reaching 2.0 per cent in 2021, which is in line with the target inflation rate. CPI growth is expected to be 1.6 per cent next year, subsequently remaining at close to the CPI-ATE growth in the following years. 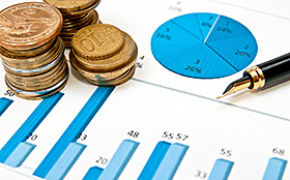 The Norwegian economic downturn bottomed out just over a year ago. According to preliminary seasonally adjusted figures from the quarterly national accounts (QNA), average quarterly mainland GDP growth in the last five quarters was 0.7 per cent.