This release includes revisions to previous figures for accrued investments and investment estimates within oil and gas extraction and pipeline transportation for the investment years 2013-2017. 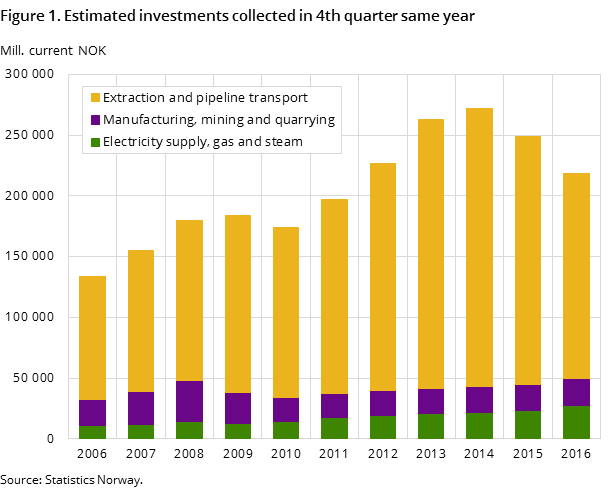 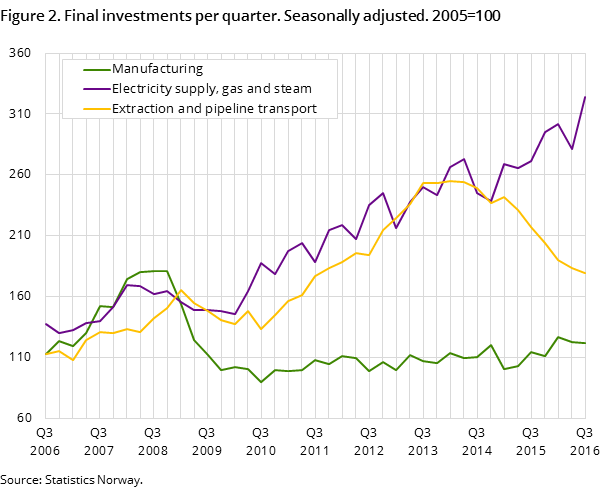 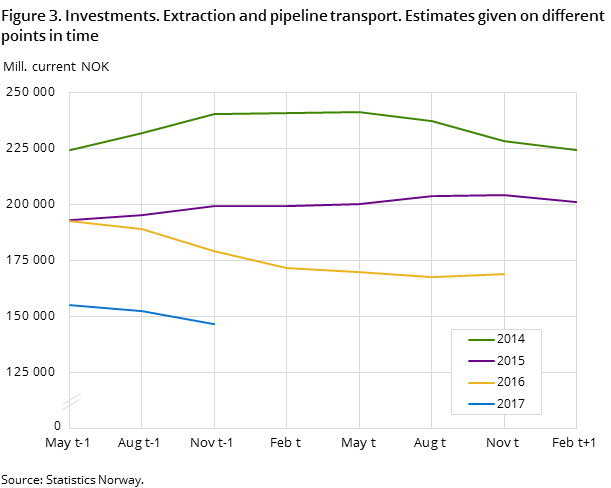 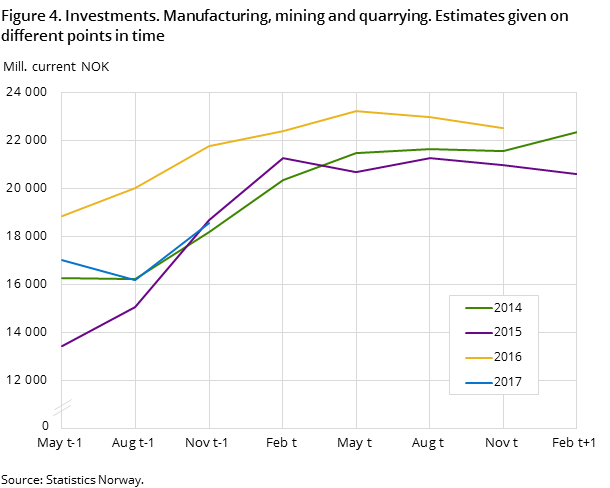 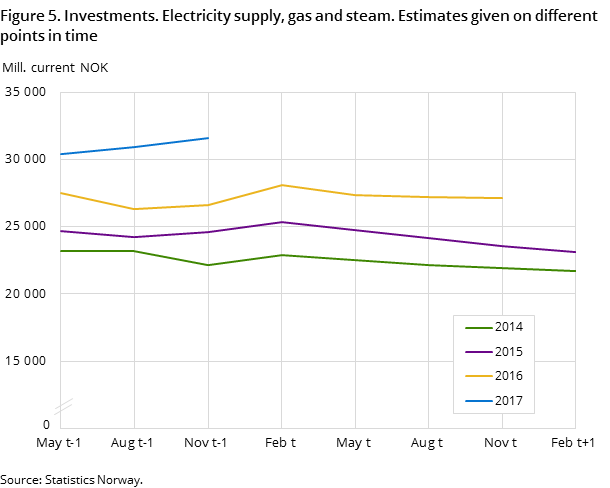 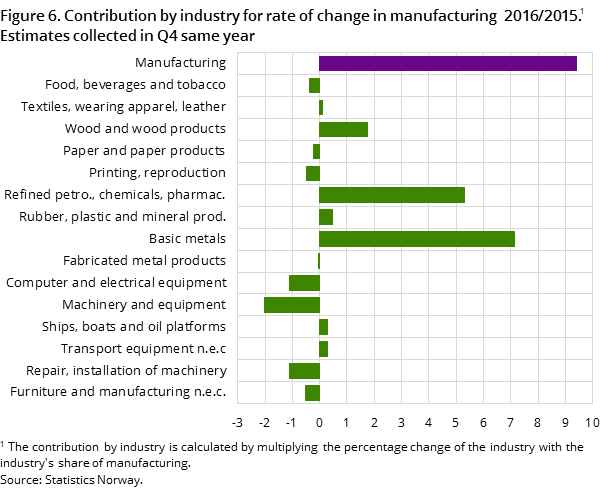 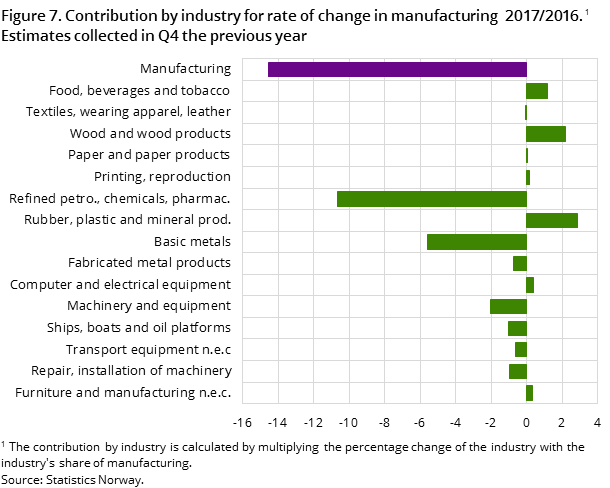 New figures for 2016 show that total investments covering oil and gas, manufacturing, mining & quarrying and electricity supply are expected to amount to NOK 218.8 billion measured in current value. The estimate is 12.1 per cent lower than the corresponding figure for 2015. The decline is mainly due to a significant fall of 17.2 per cent within oil and gas. The decrease is, however, partly offset by higher investments in electricity supply and manufacturing.

The latest estimates for 2017 show that total investments are expected to amount to NOK 196.8 billion – 13.5 per cent lower than the corresponding figure for 2016. The decline is mainly due to a fall within oil and gas. Manufacturing is also contributing negatively, while further investment growth in electricity supply dampens the overall decline.

There was a 2.3 per cent decrease in quarterly final investments for extraction and pipeline transport in the third quarter of 2016 compared with the second quarter, according to seasonally-adjusted figures. In the same period, electricity supply saw a strong increase in quarterly final investments of 15.4 per cent, while manufacturing had a minor fall of 0.8 per cent.

Lower oil and gas estimates for 2017

The investments in oil and gas extraction and pipeline transport for 2017 are estimated at NOK 146.6 billion. This is 3.6 per cent lower than the previous estimate for 2017. The decline is mainly due to lower estimates for exploration and shutdown and removal. Exploration wells and removal projects originally planned for 2017 are now postponed. The decrease is partly offset by higher estimates within the category field development. The increase in field development is partly due to the delivery of two plans for development and operation (PDO) earlier this autumn.

The estimate for 2017 is 18.2 per cent lower than the corresponding estimate for 2016, given in the 4th quarter of 2015. The decrease indicated in the present survey is slightly lower than in the previous survey. The lower relative decrease now is due to the fact that the estimate for 2016 given in the 4th quarter of 2015 fell relatively more than the decrease in the latest 2017 estimate, see figure 3. All investment categories except pipeline show a decrease compared to corresponding estimates for 2016. The decrease is largest within shutdown and removal, fields on stream and field development.

A plan for development and operation on the development project Oda is expected to be submitted to the authorities in December or early next year. PDO applications are also planned for the projects Pil og Bue, Johan Castberg and Snorre 2040 in late 2017. Although the two latter fields are major projects, they are not expected to accrue significant investment amounts in 2017 because they will, at best, start late in the year. The decrease in the investments for 2017 indicated in the survey may now be reduced, all other things being equal, if the planned schedules on these projects are realised.

Upward adjusted estimates for 2016 in oil and gas

The investments in oil and gas extraction and pipeline transport for 2016 are estimated at NOK 169.1 billion. This is 1 per cent higher than the previous estimate for 2016. The increase is mainly due to higher estimates within field development and shutdown and removal, while the estimates within fields on stream show a decrease.

The estimate for 2016 is 17.2 per cent lower than the corresponding estimate for 2015, given in the 4th quarter of 2015. The decrease from 2015 to 2016 is due to lower investments within all categories, but the main contributions come from fields on stream and exploration.

Strong increase in electricity supply in 2016, indications of further growth in 2017

New estimates for 2016 show that total investments within electricity supply are expected to amount to NOK 27.1 billion; 14.9 per cent higher than the corresponding figure for 2015. The growth is mainly due to a high investment level within transmission and distribution of electricity. The increase in the sector is related to power grid upgrades, development of transnational transmission cables and installation of new automatic electricity meters (AMR). Latest figures also show a 15 per cent increase within production of electricity, which can partly be attributed to wind power development. Implementation of new depreciation rules combined with the fact that the application deadline for electricity certifications is approaching may explain this development.

Preliminary estimates for 2017 indicate a further investment growth within electricity supply. The estimate for 2017 is 18.7 per cent higher than the corresponding figure for 2016. A high investment level within the transmission and distribution sector, together with a further increase in production of electricity explain this rise. The accelerating growth in production of electricity can partly be linked to the fact that wind power development is expected to further intensify in 2017.

The low investment level within these industries can be attributed to falling investment activity in the oil and gas industry.

Downturn in manufacturing investments in 2017

New estimates for 2017 indicate a substantial downturn in manufacturing investments; 14.5 per cent lower compared with the corresponding estimate for 2016. The sharp decline in 2017 is particularly related to declining investments in the industry grouping refined petroleum, chemicals and pharmaceutical products and basic metals. Completion of large projects, which have contributed to the growth in 2016, explains the investment fall in these industries. On the other hand, the overall decline in 2017 is somewhat dampened by high investments in wood and wood products and in rubber, plastic and mineral products.

Strong decline in mining and quarrying in 2016

Estimates for mining and quarrying in 2016 are expected to amount to NOK 595 million; a strong decline of 36 per cent compared with the corresponding figure for 2015. Figures for 2017 suggest a fall of 18 per cent.

Under-reporting has been revealed, which results in a revision of investment figures within oil and gas. Accrued investments are revised slightly upwards in the quarters from Q1 2013 to Q2 2016. All estimates given in this period for the investment years 2013-2017 are also revised upwards, due to the under-reporting.

Consequences on accrued investments within oil and gas extraction, in annual growth expressed as a percentage: