The release on 23 November will include revisions to previous figures for accrued investments and investment estimates within oil and gas extraction and pipeline transportation for the investment years 2013-2017.

Estimates for total investments covering oil and gas, manufacturing, mining & quarrying and electricity supply are now down – adjusted for both 2016 and 2017 – compared with the estimates given in the previous survey. 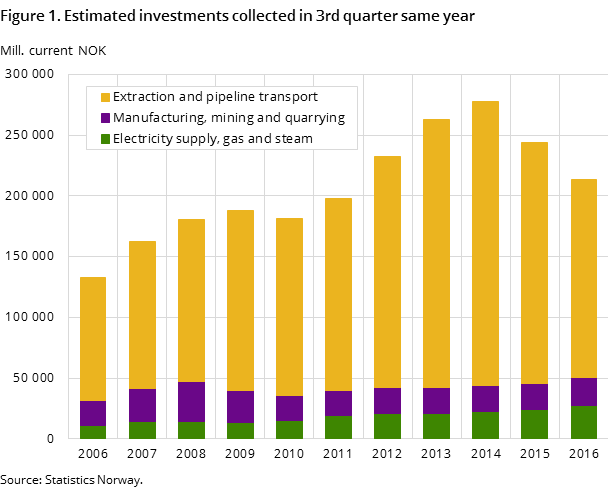 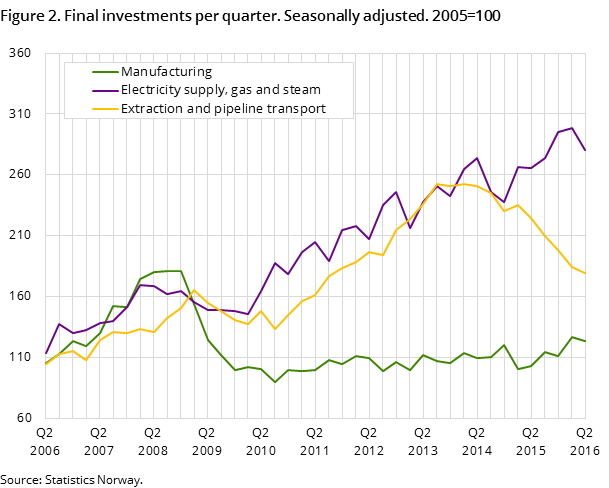 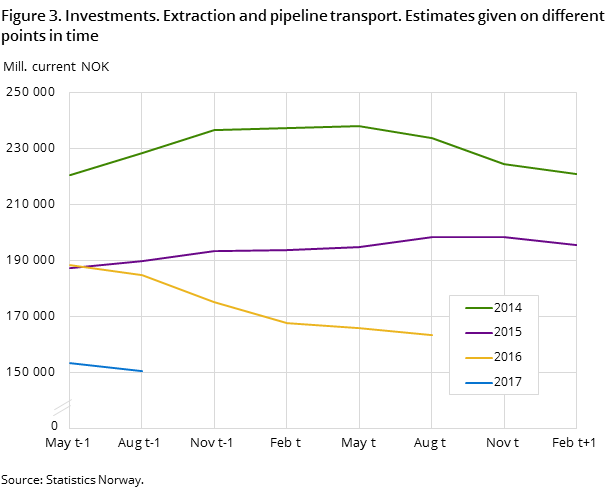 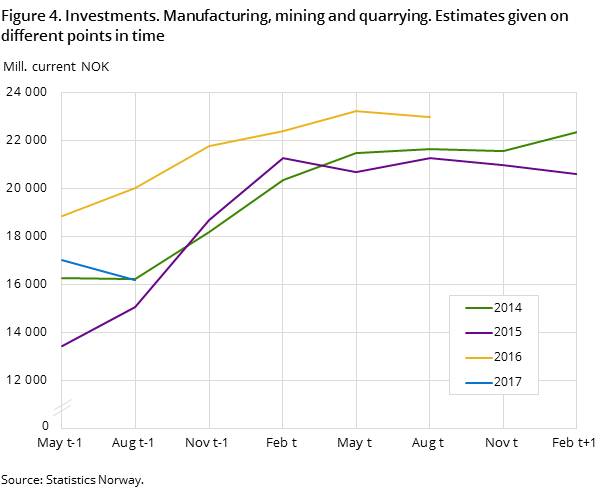 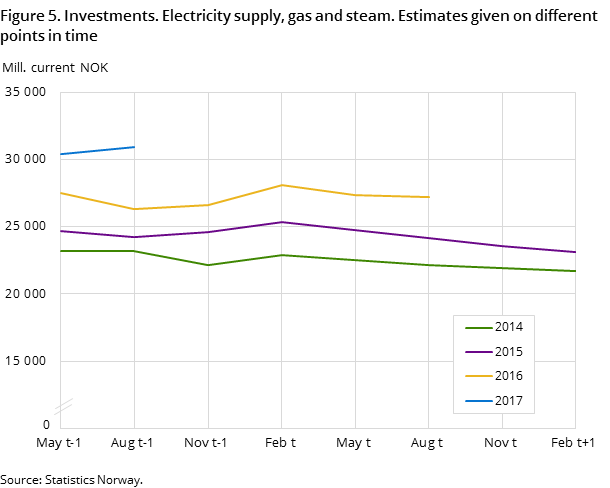 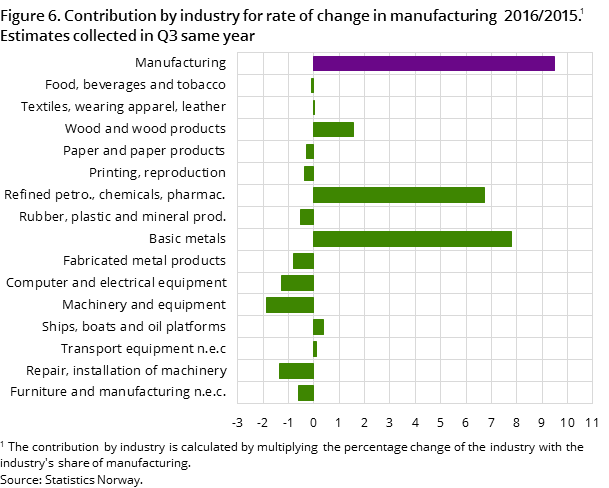 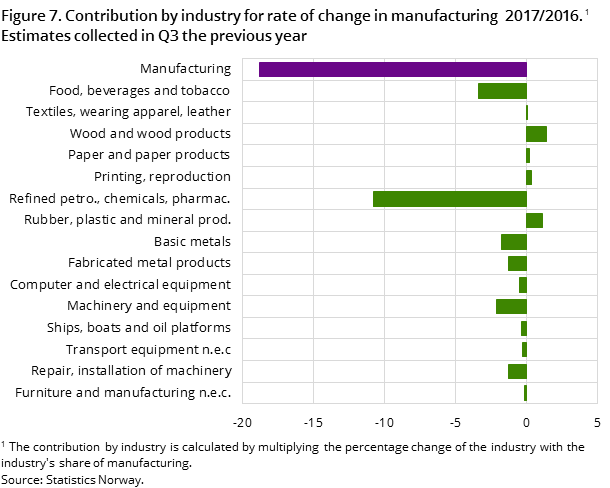 New figures for 2016 show that total investments covering oil and gas, manufacturing, mining & quarrying and electricity supply are expected to amount to NOK 213.7 billion measured in current value. The estimate is 12.3 per cent lower than the corresponding figure for 2015. The decline is mainly due to a significant fall of 17.5 per cent within oil and gas. The decrease is, however, partly offset by higher investments in electricity supply and manufacturing.

The latest estimates for 2017 show that total investments are expected to amount to NOK 197.6 billion - 14.5 per cent lower than the corresponding figure for 2016. The decline is mainly due to a fall within oil and gas and manufacturing. The fall in total investments is moderated by higher expected investments within electricity supply.

Downward adjustment of estimates for 2016 in oil and gas

The decrease from 2015 to 2016 is due to lower investments within all categories, but the main contributions come from field development, fields on stream and exploration.

The investments in oil and gas extraction and pipeline transport for 2017 are estimated at NOK 150.5 billion. This is 1.8 per cent lower than the previous estimate for 2017. A decrease from the 2nd quarter to the 3rd quarter in the year before the investment year is very unusual. This also happened last year for 2016, but until then the last time was in 1999 for the investment year 2000.

Almost the entire decrease from the last survey is due to lower estimates in shutdown and removal. The estimate for this category decreased by 25 per cent compared to the previous measurement in the 2nd quarter of 2016. Several shutdown and removal projects have been postponed. The estimate for exploration has also decreased, while the estimate for field development on the other hand has increased. The increase is partly due to the delivery of two plans for development and operation (PDO) earlier this quarter. These two projects are therefore now included in the investment survey.

Investments within field development, fields on stream and exploration are showing a particular decrease compared to corresponding estimates for 2016.

New estimates for 2016 show that total investments within electricity supply are expected to amount to NOK 27.2 billion; 12.7 per cent higher than the corresponding figure for 2015. High estimates within transmission and distribution of electricity explain this rise. The growth is particularly related to power grid upgrades and installation of new automatic electricity meters (AMR).

Investments for 2016 in manufacturing are estimated at NOK 22.3 billion – measured in current value. The 2016 estimate is 9.5 percent higher than the estimate for 2015 given in Q3 last year. There are, however, large disparities between the various industrial sectors. Some large projects within the manufacturing groups oil refining, chemical and pharmaceutical industries as well as the metal industry contribute greatly to the overall growth. On the other hand, declines are registered in some of the industries that supply goods and services to the oil and gas industry, which partly offset the rise in manufacturing. The low investment in these industries can be attributed to lower investment activity in the oil and gas industry.

Decline in manufacturing investment in 2017

New estimates for 2017 show a negative trend in industrial investments next year. Compared with the corresponding estimate for 2016, a decline of 18.8 per cent is implied. The sharp decline in 2017 has primarily to do with the industry group of oil refining, chemical and pharmaceutical industries having a considerably lower estimate than for 2016, published at the same time last year. Completion of some major projects is the main reason for the decline in this industrial sector. The food industry also had a negative impact, with an estimate for 2017 that was considerably lower than the last survey.

Strong decline in mining and quarrying in 2016

Estimates for mining and quarrying in 2016 are expected to amount to NOK 688 million; a strong decline of 22 per cent compared with the corresponding figures for the last year.

The survey is merged with oil and gas activities, investments, starting with the next quarterly publicationOpen and readClose