Sharp decrease in exploration estimate for 2016

Estimates for total investments covering oil and gas, manufacturing, mining & quarrying and electricity supply now show a decline in 2016. The downturn is mainly due to significantly lower estimates in the category exploration, within oil and gas extraction. 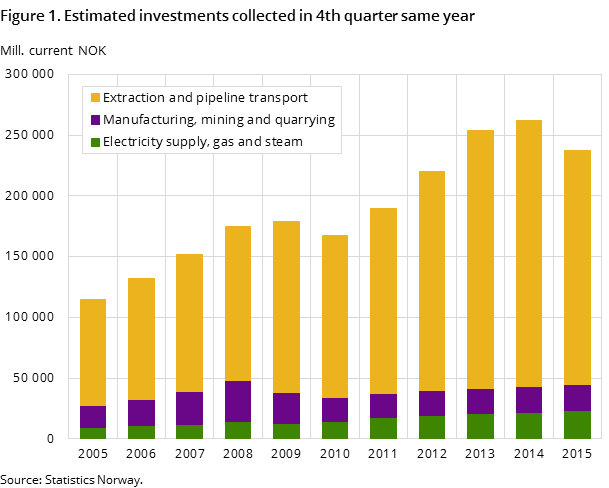 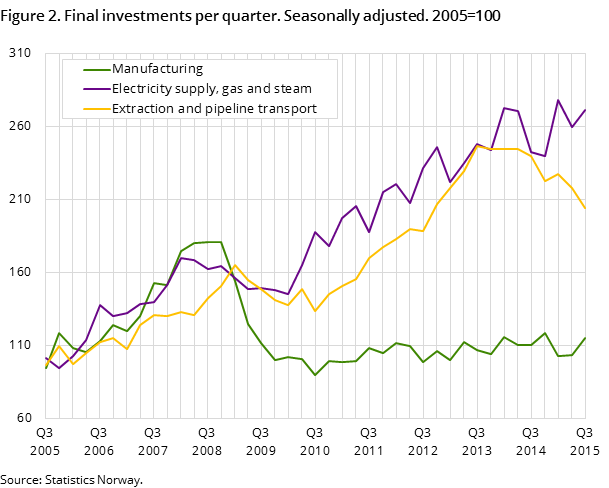 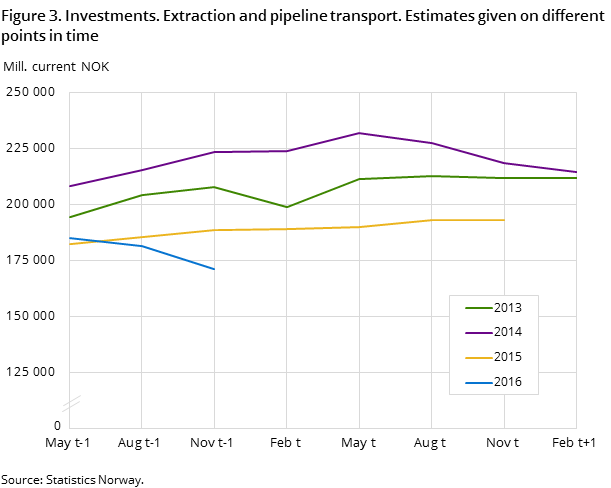 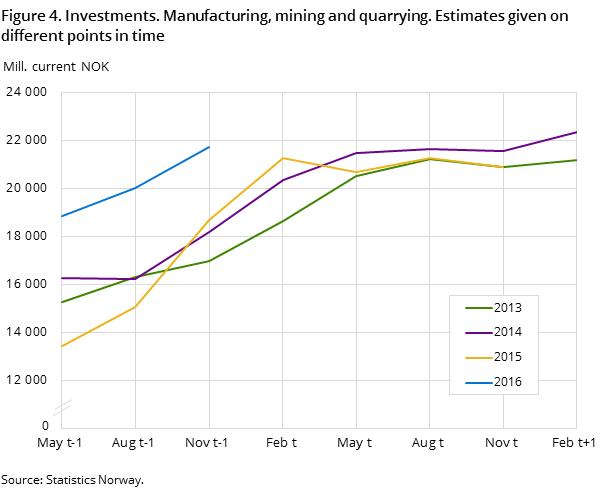 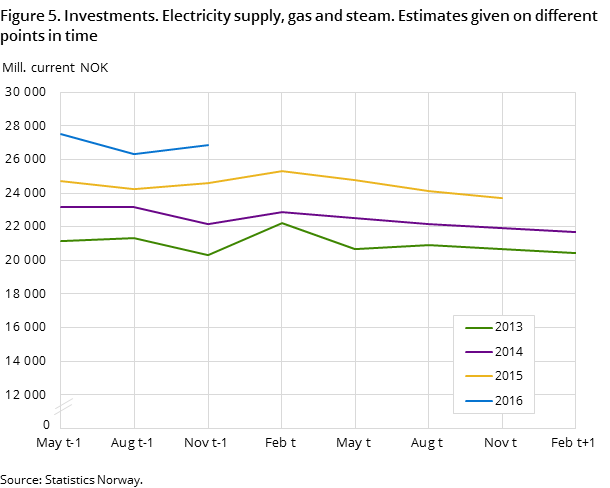 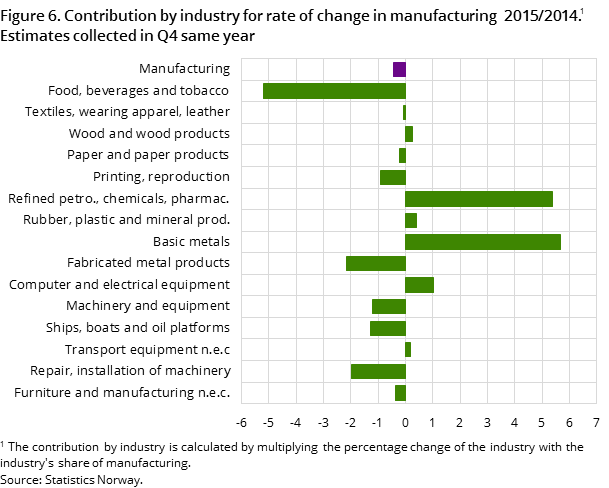 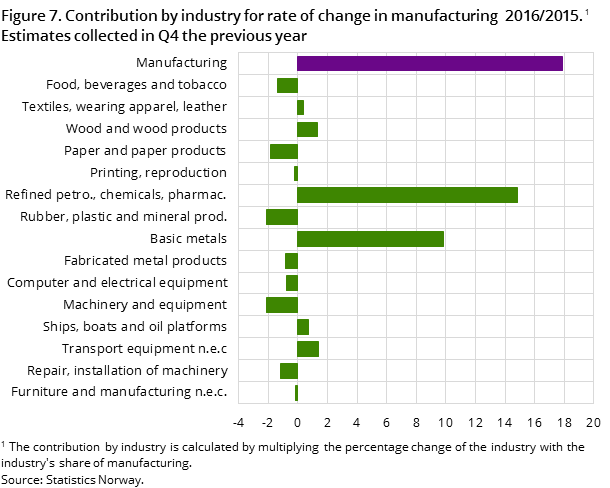 New figures for 2015 show that total investments covering oil and gas, manufacturing, mining & quarrying and electricity supply are expected to amount to NOK 237.4 billion measured in current value. The estimate is 9.4 per cent lower than the corresponding figure for 2014. The decline is mainly due to a significant fall of 11.8 per cent within oil and gas. The decrease is, however, somewhat subdued by an investment increase in electricity supply (up 7.7 per cent), while manufacturing investments are more or less unchanged.

The latest estimates for 2016 show that total investments are expected to amount to NOK 219.4 billion. This is 5.4 per cent lower than the corresponding figure for 2015. The decline is mainly due to a fall of 9.3 per cent within oil and gas. The fall in total investments is moderated by higher expected investments within electricity supply and manufacturing investments.

There was a 6.3 per cent decrease in quarterly final investments for extraction and pipeline transport in the third quarter of 2015 compared with the second quarter of 2015, according to seasonally-adjusted figures. On the other hand, electricity supply and manufacturing saw an increase in quarterly final investments in the same period equivalent to 3.7 and 11.0 per cent respectively.

Distinct decrease in oil and gas for 2016

The investments in oil and gas extraction and pipeline transport for 2016 are estimated at NOK 171 billion. This is 9.3 per cent lower than the corresponding estimate for 2015 given in the 4th quarter of 2014. The decrease is due to lower investments in exploration, fields on stream and pipeline transport, while field development, onshore activity and shutdown and removal seem to increase the investment level compared to 2015.

Sharp decrease in the exploration estimates for 2016

The investments in oil and gas extraction and pipeline transport for 2015 are estimated at NOK 193 billion. This is at the same level as the previous estimate for 2015.

It is particularly investments within field development, fields on stream and exploration that show a decrease compared to corresponding estimates for 2014, while the estimates indicate an increase within onshore activities and shutdown and removal.

High investments in electricity supply in 2015 – also growth in 2016

New estimates for 2015 show that total investments within electricity supply are now expected to amount to NOK 23.6 billion; 7.7 per cent higher than the corresponding figure for 2014. This increase is mostly due to a high investment level within transmission and distribution of electricity. The growth is particularly related to power grid upgrades, in addition to installation of new power meters (AMS).

The November survey shows that total investments within manufacturing in 2015 are expected to amount to NOK 20 billion. The estimate is more or less the same as the corresponding figure for 2014. However, despite this development, there are large differences between the different manufacturing industries. Industries such as food and food products, fabricated metal products as well as repair and installation of machinery are seeing a decline in investments. The fall in food and food products is due to completion of several large projects in 2014, while the downturn in the two latter industries can be related to lower activity in the petroleum sector. The overall decline in manufacturing investments is however muted by a strong growth within export-related industries. The industry group refined petroleum, basic chemicals and the pharmaceutical industry together with basic metals is seeing high investment levels due to capacity upgrades and modernisation. Some of these projects will last for several years.

The latest estimate for manufacturing investments in 2016 indicates a solid increase of 18 per cent, compared with the corresponding figure for 2015. This strong growth is due to growth rates of 87 and 56 per cent for the industry group refined petroleum, basic chemicals and pharmaceutical industry, and for basic metals respectively. However, the growth rate for 2016 is noticeably reduced compared with the August survey, despite an upward adjustment of the 2016 figures. This is due to the fact that the 2015 figures, measured last year, were significantly revised upwards from the August to the November survey. Hence, it is important to stress that early estimates for next year entail a degree of uncertainty.

Strong decline in mining and quarrying

Estimates for mining and quarrying in 2015 are expected to amount to NOK 930 million; a major decline of 34 per cent compared with the corresponding figure for 2014. The drop seems to continue into 2016.

The survey is merged with oil and gas activities, investments, starting with the next quarterly publicationOpen and readClose