Lower population growth, an ageing rural population and growing numbers of adult and elderly immigrants. These are some of the trends that will impact on the future population, according to the 2018 population projections.

In recent decades, the population in Norway has grown considerably due to high net migration, relatively high fertility rates and a drop in the number of people at an age where mortality rates are high. Population growth peaked in 2011 and 2012, but has since fallen markedly. In the main alternative of the population projections, population growth levels out over the next ten years, before sinking again. However, the growth will be positive throughout this century in the main alternative, and by 2040 there will be 6 million inhabitants in Norway. The current population stands at 5.3 million.

Statistics Norway projects the population in the municipalities up to 2040. At the national level, figures up to 2100 are published, with a focus on the period 2018–2060.

In the population projections, several different alternatives are produced for future population developments in Norway. The main alternative (MMMM) reflects a medium development in fertility, life expectancy, internal migration and immigration. Specifically, this entails the following:

• fertility continues to fall to just below 1.60 children per woman in the short term, before gradually rising to a long-term level of 1.76

We also produce other alternatives with other assumptions. Population growth is far higher in the HHMH alternative, which assumes high fertility, high life expectancy, medium internal migration and high immigration. In the LLML alternative, with low fertility, low life expectancy, medium internal migration and low immigration, the population continues to increase for a few decades, but by 2060, the population in Norway starts to decline. The alternatives for strong and weak ageing (LHML and HLMH) show how dissimilar the age structure may become depending on the combination of the various alternatives of the assumptions.

The fact that the estimates differ between the different alternatives shows the impact of the assumptions. Assumptions for immigration are associated with the most uncertainty, but developments can also vary somewhat from the assumptions for fertility, life expectancy, internal migration and emigration. The uncertainty in the population projections increases the further ahead we look. The figures are particularly uncertain when examining small groups, such as the population in municipalities by sex and one-year age groups.

The main reason why the growth in the main alternative (MMMM) is lower than we have seen in the last decade is that immigration has fallen and is expected to continue at a lower level than in the last decade. In addition, the fertility has fallen considerably. We expect it to increase somewhat after initially remaining low for a few years, but it is not expected to be as high as ten years ago.

The growth in the population is primarily in central areas, while in many rural municipalities the population is declining. This is linked to the assumption that internal migration patterns seen in the last ten years will continue. Thus, our projections show continued centralisation, particularly among young adults.

The proportion of elderly people in the Norwegian population is steadily growing, but the trend is not as strong as in some other European countries. In the main alternative, the proportion of the population aged 70 and over increases from the current 12 per cent to 21 per cent in 2060. One in five inhabitants will thus have reached the age of 70. The increase is particularly strong among those aged 80 and over. Additionally, because of the population growth, we will see more than a threefold increase in the number aged 80 and over.

The ageing population is most clearly evident in rural areas, and migration patterns reinforce ageing in two ways: young people of childbearing age move to towns and cities, and any children they have are also therefore more likely to be born in central areas. The elderly remain in rural areas, and by 2040 more than one in three inhabitants in some rural municipalities will be age 70 or above. 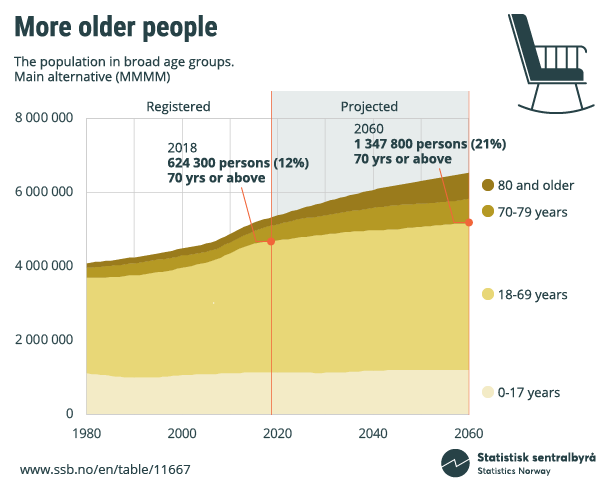 Ageing has consequences for what is referred to as the inverse dependency ratio, which is an indication of how many people are of working age relative to the number of elderly and/or children and adolescents. Today, the ratio is more than 3:1, but by 2060 the ratio will fall to 2:1. 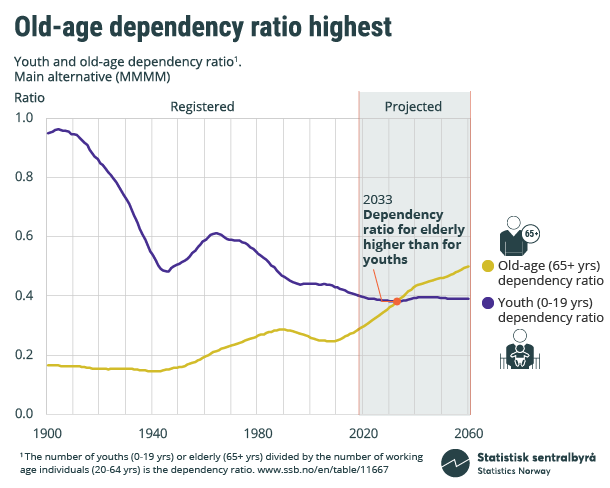 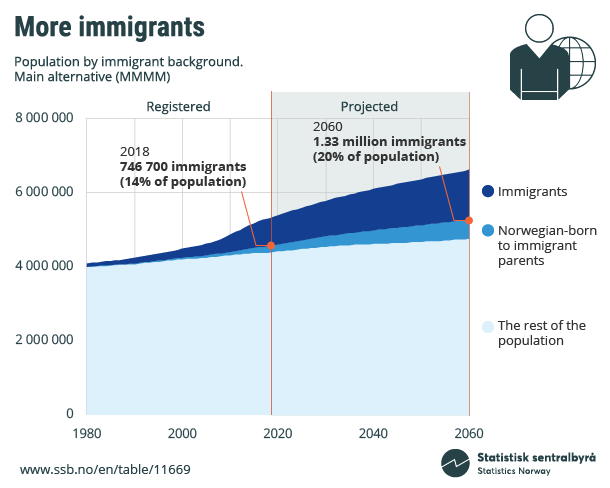 Excess of births and net migration

Compared with the previous projection, which was published in June 2016, the projected population in the main alternative is somewhat lower this time. This is due to lower assumptions about future immigration and fertility (in the short term), and because the population in Norway is now lower than we thought it would be when we published the previous population projection.

Detailed results from the projection, including population by age and sex for all municipalities up to 2040 and for Norway as a whole up to 2100, are available in StatBank. Figures from earlier projections are also available. The projected demographic trends for Norway are also illustrated in a mapping program (in Norwegian).

The results from the population projections, as well as the methods and assumptions used, are discussed in more detail in a separate report.