Most people, 28 per cent, live in a household with two persons. It is also quite common to live alone. Seventeen per cent of the people living in private households live alone.

In recent decades, more and more households have consisted of one person, and the average size of households has declined gradually. This trend seems to be continuing, but at a slower rate. In recent years we have seen a decline in the proportion of people living alone in Oslo, especially in the inner city urban districts. This development is possibly driven by the increasing housing prices and the fact that some people choose to live with others in order to reduce living expenses. However, more than half of the homes in these urban districts are inhabited by one person only.

The proportion that lives alone varies with age and sex

The relatively higher percentage of men living alone is partly explained by divorces. In a divorce, the children usually stay with the mother and the father lives alone, at least temporarily. As from 60 years of age it is more common for women than for men to live alone. One main reason for this is that women on average live longer than their generally older husbands and become widows.

It is most common to live alone in central urban municipalities and in remote inland areas in Southern Norway, as well as in Northern Norway. In Oslo, Bergen and Trondheim more than one in five live alone. Low percentages of persons living alone are found in the commuting areas around the largest cities and in coastal areas of Southern Norway. 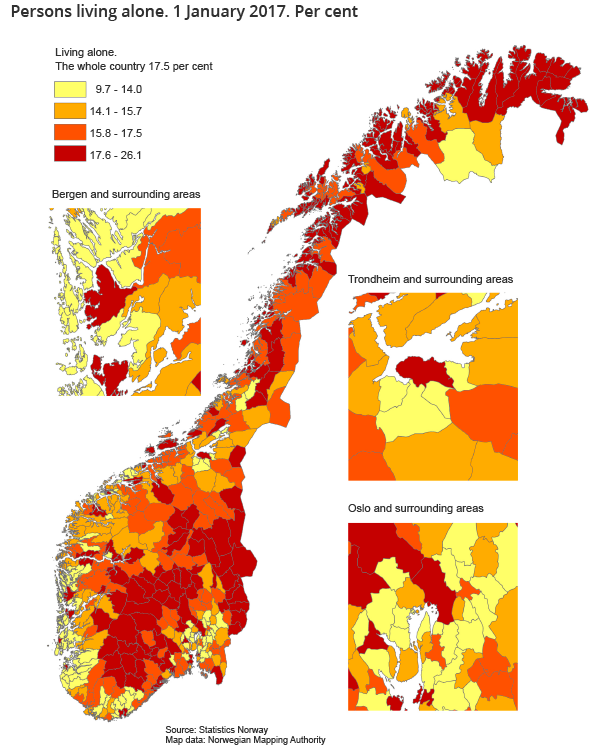