Total deposits in Norwegian banks amounted to NOK 3 385 billion at the end of August, up 16 per cent from end-August last year. The growth in deposits from Norwegian households was strongest among the domestic sectors. 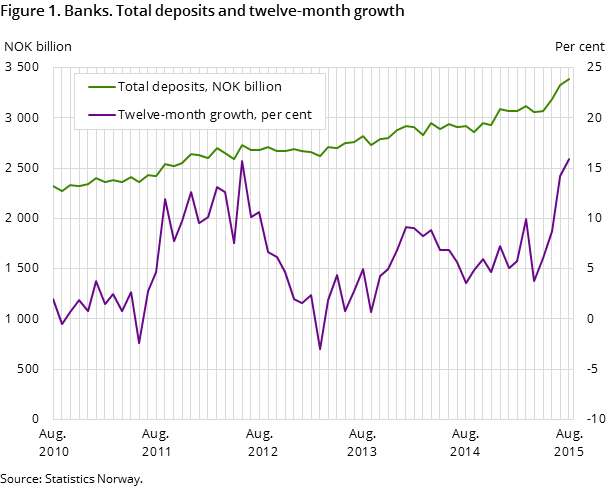 Households place most in transaction deposits

Other deposits totalled NOK 1 254 billion at end-August, of which domestic households and domestic non-financial corporations accounted for approximately NOK 110 billion each.

From April 2015, a new specification of deposits was implemented in the banks’ reporting of deposits. This causes a break in time series for stocks by types of deposits, which means that the time series from April this year are not comparable to previous periods.

The background for the new specification of deposits was a restructuring of the monetary aggregate statistics according to the ECB’s guidelines. For more information, please see ‘Pengemengdestatistikken 2015’ (in Norwegian only).

The definition of other deposits is now stricter than before, and requires that there is a fixed maturity and/or notice of withdrawal or a predetermined purpose. As a result, several types of savings accounts have been transferred from other deposits to transaction accounts.