Decline in turnover for water transport

Turnover in the industry group ‘sea and coastal freight water transport’ fell sharply from NOK 150.9 billion in 2015 to NOK 136.4 billion in 2016. The decrease in revenues was mainly due to lower activity following the lay-up of offshore vessels caused by the dramatic situation in the offshore market, with volatile oil prices and overcapacity of ships continued in 2016. More employees were also made redundant in 2016 as a result of companies' cost-cutting programmes. The number of persons employed in the industry group went down by 1 440 from the year before, to 13 950 in 2016.

In contrast to the previous year, the turnover for the industry class ‘freight transport by road’ rose by NOK 725.2 million, to NOK 49.1 billion in 2016. Gross investments constituted NOK 1.6 billion in 2016. This corresponds to a 10 per cent decrease from 2015. Local KAUs in the land transport division as a whole reported a turnover of NOK 82.4 billion, an increase of 1.7 per cent. The number of persons employed was almost unchanged from 2015, and totalled 74 430.

Change in population for warehousing and support activities

The industry division for ‘warehousing and support activities for transportation’ had a turnover of NOK 96.4 billion in 2016 compared to NOK 102.2 billion a year earlier. The decline in the turnover can be explained by exclusion of the largest local KAUs from the industry subclass ‘other services incidental to land transport’ due to a sector change to the public sector. The figures are not therefore comparable with previous years at an aggregate level.

Decline for transport and storage 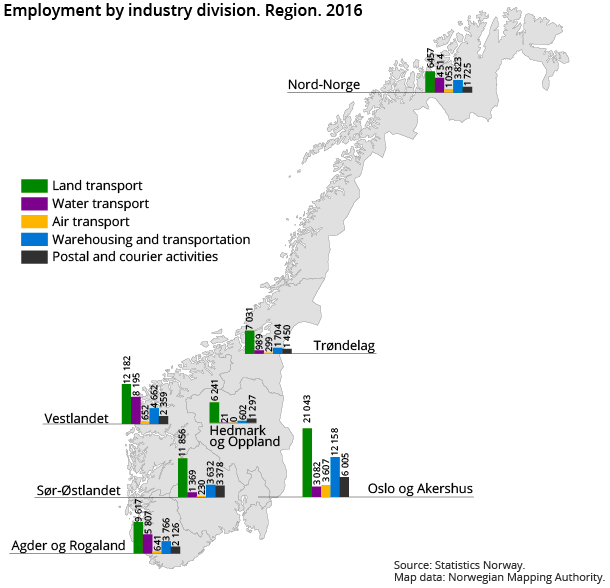 From 2015, the Structural Business Statistics are based on a new data basis for wage earners. The main source in the period to 2014 was the NAV Employee Register (State Register). In 2015, the reporting to this registry was coordinated with the reporting of payroll and personnel data to the Tax Administration Authority and Statistics Norway. The common reporting system is called “A-ordning”. “A-ordning” generally provides data with higher quality and accuracy at the individual level, and covers more wage earner conditions than the State Register. In the State Register, employees who work less than four hours per week on average were not included.