ICT service industries had a turnover of NOK 156.8 billion in 2011, which is a growth of 8.4 per cent from 2010. Employment and value added increased by 5.6 and 5 per cent respectively in the same period. 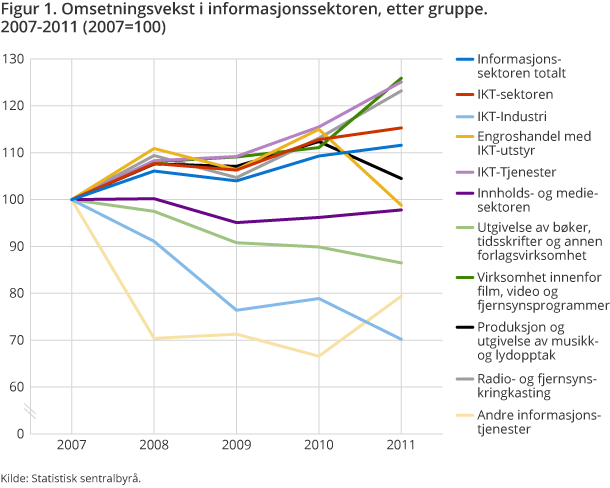 ICT service industries is the largest segment in the ICT sector, which together with the content and media sector make up the information sector. The information sector as a whole had an increase of 2.1 per cent in turnover, and totalled NOK 253.1 billion. Value added also rose from 2010 and was NOK 98.9 billion in 2011. This is 1.4 per cent higher than the previous year.

Large increase in gross investments in the content and media sector

Decline for wholesale of information and communication equipment

With an increase in its value added of NOK 580 million and a turnover of NOK 2.7 billion in 2011, value added in motion picture, video and television programme activities rose 28 per cent. Publishing of books, periodicals and other publishing activities had almost 1 300 fewer employees in 2011 than in 2010, and there were around 13 900 employed by the end of 2011. Programming and broadcasting activities had a turnover of NOK 10.4 billion in 2011, down 9 per cent from 2010.