This statistics has been discontinued. In the statistics Information and communication, structural statistics, the corresponding figures can be found in StatBank table 09608. 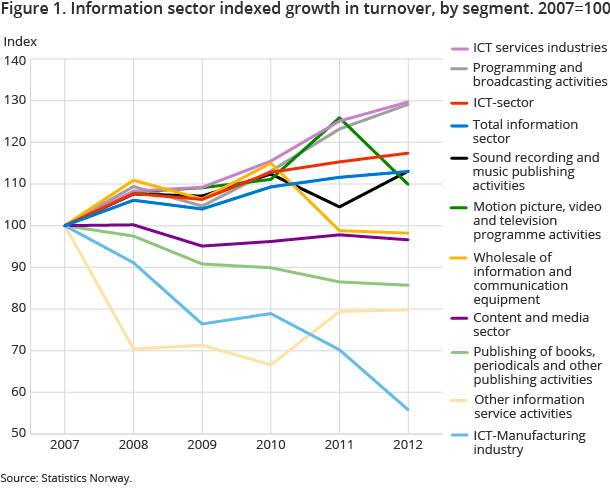 The information sector is made up of the ICT sector and the Content and Media sector. Measured by value added , the ICT sector is the bigger of the two, with NOK 86 billion. The turnover in this sector grew by 1.9 per cent from 2011 to NOK 210 billion in 2012; an increase of nearly NOK 4 billion. The gross operating surplus rose by as much as 11.4 per cent in 2012, and was over NOK 31 billion.

'ICT services industries' contributed most to increase in employment

'ICT service industries' is the largest segment in the ICT sector, and its turnover increased by 3.7 per cent, or NOK 5.8 billion, giving a total of NOK 163 billion in 2012. Employment increased by around 1 900 persons in 2012 to around 65 500, and this segment stood for nearly all of the increase in employment in the information sector.

Not every segment in the content and media sector had a decline in 2012. The programming and broadcasting activities segment in particular had a good year, with an increase in turnover of NOK 500 million. This was an increase of 4.8 per cent to a total of almost NOK 11 billion. The value added of NOK 5.3 billion was 5.9 per cent and NOK 300 million higher than in 2011.