Price of natural gas pulled up the PPI

The producer price index (PPI) rose 3.6 per cent from September to October. An increase in the price of natural gas of over 20 per cent was the most important contributor.

Over the last couple of months, the price index of oil and gas extraction has reached similar levels as the period from 2011 to the major oil price drop in autumn 2014. During that period, the price of oil was mostly above 100 US dollars per barrel, while it was around 80 US dollars per barrel in October 2018. In the PPI however, prices are measured in Norwegian Kroner (NOK). In the years from 2011 and throughout most of 2014, the NOK was much stronger against the US dollar than it is today. As the NOK has weakened against the US dollar, export prices measured in NOK have increased. 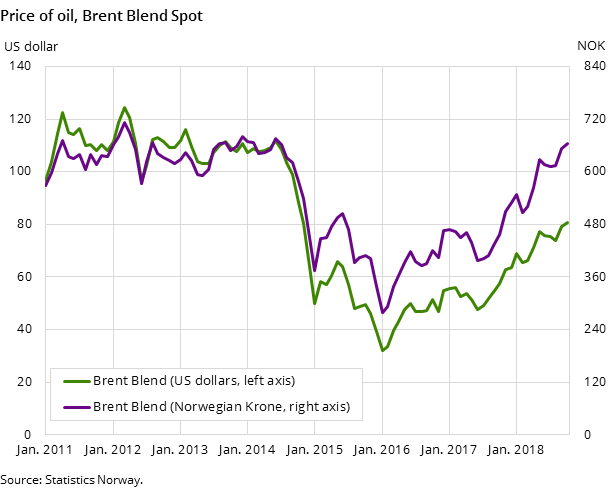 These higher export prices thus impact export revenues. This is reflected in Statistics Norway’s statistics on external trade in goods. The preliminary figures from the statistics show that Norway exported oil for over NOK 198 billion and natural gas for over NOK 172 billion during the first three quarters of 2018. This was over 20 per cent more than the same time span last year, both for oil and gas. When comparing volumes, in this case the number of barrels and number of cubic metres, there was however a decrease for both oil and gas.