In 2018, Norway had the highest price level for food and non-alcoholic beverages overall in Europe. Prices for dairy products, eggs, vegetables and grain products were significantly higher than the EU countries’ average.

Norway most expensive in most food groups

Comparative data on consumer price levels are available for more detailed breakdowns of food products. The Norwegian prices were Europe’s highest for several of these sub-groups, including "milk, cheese and eggs", "bread and cereals" and "fruits and vegetables", with indices 74, 67 and 58 percent above the EU average, respectively. Norwegian meat prices were 55 per cent above EU28, which was significantly lower than in Switzerland (128) and somewhat lower than on Iceland (65).

"Fish and seafood" was the consumer group where Norway showed the lowest price dispersion compared to the EU with a price level only 9 per cent above the EU average - on par with Greece, Italy and Ireland. On the contrary, Norway topped the list for the groups "other foods" and "non-alcoholic beverages" with price levels at 90 and 81 per cent above the EU average, respectively. The group “other foods” includes products such as sauces, soups, spices, flavouring ingredients, baby food and ready-made dishes.

The cheapest food and non-alcoholic beverages in Europe was found in Northern Macedonia where prices were 62 per cent of the EU average, or 40 per cent of the Norwegian price level. Meat was the food group with the largest price dispersion, with indices ranging from 62 in Montenegro to 228 in Switzerland.

However, large price differences are also present across the EU member states. Indices ranged from Denmark, with EUs highest price level at 30 per cent above the average, to the three countries Bulgaria, Poland and Romania, with price levels 24-34 per cent below average. Hence, it will take between 40 and 50 NOK to buy you the same basket of goods in the cheapest EU countries, which in Norway would have cost 100 NOK.

Despite Norway having the highest price level in Europe, Norwegians spend a relatively low share of total household expenditure on food and non-alcoholic beverages. According to National Accounts, Norwegians spent 11 per cent of their total consumption expenditure on these goods. This share has gradually decreased from around 16 per cent in 1995. However, measured in volume, compared to the past we now buy more food and non-alcoholic beverages.

Furthermore, the share of expenditure is low compared to most European countries. The average share for the 37 countries participating in the survey was 18 per cent. In fact, only 6 countries had a lower expenditure share on food and non-alcoholic beverages than Norway.

This is intuitive when considered in conjunction with the high income level in Norway. When inhabitants of a country become wealthier, the share of the household budget spent on food and other necessities will normally decrease as consumption of other goods and services increases. 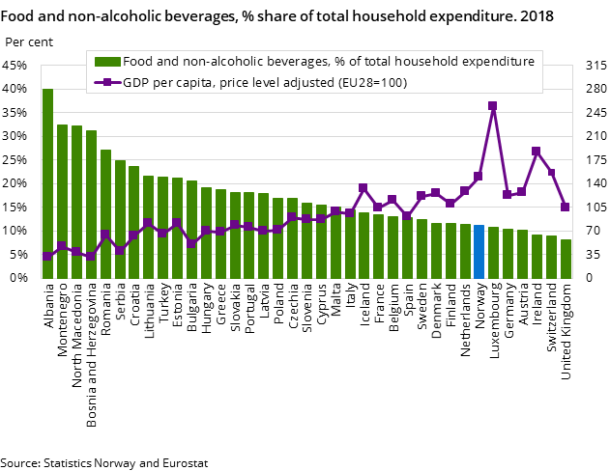 However, there are factors which complicate such a comparison. For instance, the expenses for dining out is not included in the category "foods and non-alcoholic beverages", but "restaurant services". Thus, eating at a restaurant will reduce the proportion spent on "food", all else equal.

There are several factors that determine the relative price levels, besides the varying prices of the countries. For instance, the price level indices consider the differences in consumption patterns between countries by weighting different food groups in the aggregation. Consequently, price level dispersion can be influenced by countries' differing priorities and preferences.

Moreover, it is important to emphasize that the survey is designed primarily to map price differences in space rather than over time. Hence, changes in indices over time does not necessarily reflect the individual countries’ price trends, as opposed to when measured by, for instance, the consumer price index.

Changes in price levels from one year to another may be due to disproportionate price increases across the countries, but fluctuations of countries’ currencies against the euro is often an important contributor. Exchange rates are crucial in determining relative price levels, and exchange rate movements can have a big impact on the development of price levels over time. 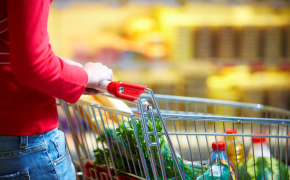 Iceland, Switzerland and Norway most expensive in 2017

EFTA members Iceland, Switzerland and Norway were the most expensive countries in 2017 for actual individual consumption. Albania and North Macedonia were the cheapest countries in Europe.