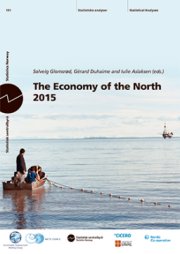 The objective of The Economy of the North 2015 is to present a comprehensive overview of the economy of the circumpolar Arctic, including the traditional production activities of the indigenous peoples.

The Arctic regions belong to different countries, and information on social and economic issues has not been easily available at the circumpolar level. A central task of the ECONOR projects is to contribute to fill this gap by presenting a comprehensive overview of the circumpolar Arctic economy and socio-economic conditions. The Economy of the North 2015 report finalizes the ECONOR III project, carried out by Statistics Norway, Center for International Climate and Environmental Research - Oslo (CICERO) and Université Laval, Quebec, Canada, in cooperation with the circumpolar ECONOR network of statisticians and academics. This overview of the circumpolar Arctic economy provides an information platform for assessment of the sustainability of the Arctic communities in terms of natural wealth management and vulnerability towards climate change and global policies and trends.

Since the publication of the previous report The economy of the North 2008, the financial crisis of 2008 left particularly marked footprints in the less diversified Arctic economies. Although resource income in several regions are transferred to owners outside the Arctic regions, the regional and local tax revenues, royalties and wage income also suffer.

The report first looks at the Arctic with a bird’s eye perspective and presents macro level data of Gross regional Product (GRP) per capita and disposable income of households per capita by region. Regional data are depicted in relation to their corresponding Arctic nations, and to the circumpolar level. The report then looks closer at the role of each regional economy in the national context. The core tables are compiled to present a consistent set of data by region, when possible at the same level of detail by industry. A model based analysis is presented of the impact of climate policy on the prospects for gas and oil exploration in Arctic regions towards 2050.

Moreover, the report presents social indicators, e.g. composition of the population, the life expectancy and rate of infant mortality are all observations that convey crucial information on livelihood and living conditions, which gross regional product (GRP) for Arctic regions cannot convey. Fishing and hunting for own consumption and sharing is a major source of subsistence livelihood for indigenous peoples and other local people, and at the same time part of a lifestyle that represents continuity, sharing and connection to nature.

The increased demand for other nature values has sharpened conflicts over land use between mineral industries and the renewable nature based industries, not the least for traditional living, with hunting, fishing and herding by indigenous peoples. The GLOBIO model is used for a pilot study. The increased importance of tourism is illustrated in a new chapter.

The Economy of the North 2015 was edited by Solveig Glomsrød (chief editor) of CICERO, Gérard Duhaime (co-editor) of Université Laval, Quebec, and Iulie Aslaksen (co-editor and project leader) of the Research Department of Statistics Norway.

Environmental accounts, Nature and the environment