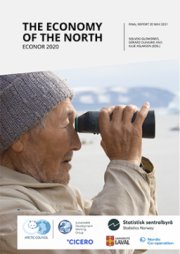 In "The Economy of the North ECONOR 2020" an international network reports on the Arctic economy, in a work coordinated by Statistics Norway (SSB), CICERO Center for International Climate Research and Laval University in Quebec, Canada.

The report has contributions from experts throughout the circumpolar Arctic and is the fourth ECONOR report since 2006. It is published on 20 May and presented to the ministerial meeting of the Arctic Council. The purpose of ECONOR is to give an overview of the economy and socio-economic conditions across the Arctic and within the Arctic regions of each of the eight Arctic states. This work has contributed to compile and compare statistical data from the national statistical offices of the Arctic states and from other sources.

The world looks to the Arctic for petroleum, minerals, fish, and land. ECONOR gives knowledge on how global demand for natural resources and climate change impact on Arctic industrial development as well as on livelihoods and culture of the Indigenous Peoples whose homeland is in the Arctic. ECONOR presents the gross domestic product (GDP) for Arctic regions ang gives an overview of the economic structure in Arctic regions, with the economic values (value added) from the sectors.  Disposable income of households is a basic socioeconomic indicator, while public services, including education and health, are also important for the standard of living.  A pilot study from Canada included estimates for the value of public services to the population as part of disposable income per capita. In addition, ECONOR includes a chapter illustrating socio-economic conditions, income inequality and social indicators, comprising demographic indicators, such as population growth, life expectancy, and female share of population, and indicators for education and labor market, such as the ratio between employed and non-employed persons (dependency ratio). ECONOR also includes a chapter on the nature-based livelihoods, presenting knowledge on Sámi reindeer herding and other Indigenous Peoples’ livelihoods, and presenting statistics from Alaska showing the harvesting form nature.

ECONOR explores how the prospects of a green transition and corresponding risk can impact petroleum industry in the Arctic, and the “green transition” is also in other ways visible in the economic analysis, showing that several Arctic regions are developing industry related to wind power, hydrogen and battery production. ECONOR comprises a study of tourism in the Arctic and a new chapter with case studies of transportation, infrastructure and assessments of costs related to melting permafrost. Statistics Norway presents statistics for Svalbard, Sámi statistics, and a study of economic values from ocean management in the north. A case study for the Barents region, from the Business Index North (BIN) at the Nord University on Norway, presents data for Sustainable Development Goals (SDGs), a topic planned to be followed up in future ECONOR work.

ECONOR provides important knowledge for decision makers on conditions for sustainable development in the Arctic. The ECONOR editors gratefully acknowledge funding from the Norwegian Ministry of Foreign Affairs, Nordic Council of Ministers and Department of Crown-Indigenous Relations and Northern Affairs Canada, co-funding from cooperating partners, support from Arctic Council’s Sustainable Development Working Group (SDWG), statistical advice and data from national statistical offices of Arctic states, contributions to chapters of the report written by experts of the ECONOR network, and support from Statistics Norway having hosted the editorial office of ECONOR.

Environmental accounts, Nature and the environment