Natural resources and the environment 2002

There is a newer version of this publication available. Go to the latest version 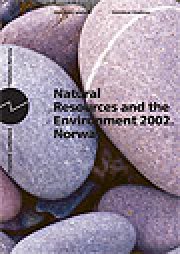 Open and read the publication in PDF (205 pages)

The greenhouse gas emissions have never been higher

The Norwegian emissions of greenhouse gases increased by 2 per cent from year 2000 to 2001, and have now reached the highest level ever recorded. The amounts of waste continue to increase, and for each Norwegian close to 2 tonnes of waste are generated each year. The discharges to water from the petroleum activities have increased significantly since the mid 1990's, but last year's change was modest. The pressure on the Norwegian nature from acidifying substances is decreasing. The discharges of the plant nutrients phosphorus and nitrogen to sensitive coastal areas have been reduced, but the nitrogen inputs still have to be reduced substantially to reach the reduction target. (11.04)

Natural resources and the environment 2002. Norway