Natural resources and the environment 1999

There is a newer version of this publication available. Go to the latest version 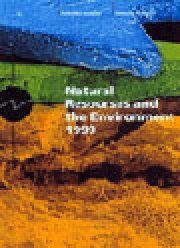 Open and read the publication in PDF (260 pages)

What environmental trends were apparent in 1998?

This year’s edition of Natural Resources and the Environment presents a mixed picture of general environmental developments. Some factors are showing negative trends; for example, emissions of greenhouse gases are still increasing, and the quantity of waste generated by households is rising sharply, at about the same rate as GDP (gross domestic product) (figure 1). Energy use, some of which has negative environmental consequences, rose more quickly than GDP in 1998, after a slower rise in the preceding years. However, there are also positive signs: treatment of waste water is gradually improving, waste management is being improved to make better use of resources, and emissions of some air pollutants are being reduced (figure 2).

Investments in oil and gas extraction in theNorth Seaare now dropping. If the low level of investments continues, this will eventually result in a lower level of activity, and thus reduce environmental pressure from this sector.

In general, it seems that at least one of the following applies to environmental problems where there has been a positive trend:

1. There has been clear legislation and a set of instruments available to the authorities, who have been in a position to enforce and use them.

2. Environmental measures have not been a threat to general economic activity or to powerful economic interests.

3. Technological developments have made it possible for example to reduce emissions or restrict the use of environmentally-harmful products at an acceptable cost.

Which areas are covered by this publication?

A simplified, but now generally recognized way of analysing environmental problems is to distinguish between

• the state of the environment (water quality, air quality, biological diversity), and

• environmental impacts (fish mortality, reduction in crop yields, species extinction). This will at some point lead to a

• societal response to problems (e.g. imposition of a CO2 tax, protection of areas, treatment of emissions). The response in turn results in changes in economic driving forces, environmental pressures and the state of the environment.

Natural resources and the environment 1999