The harvested quantity of aquaculture products reached 1.3 million tonnes in 2012. A 16 per cent increase in produced quantity compared to 2011 confirms the continuing growth in the Norwegian aquaculture industry. Although prices fell in 2012, the total first hand value reached NOK 31 billion. 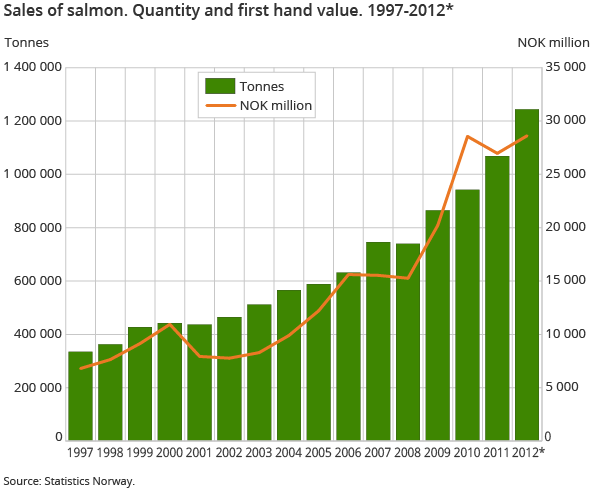 Falling trend for other marine species

The sold quantity of other marine species fell 33 per cent from 2011 and amounted to 12 400 tonnes. Of this, 80 per cent was farmed cod. The number of licences running is half that of 2009, and in 2012 only 126 licences were running. This negative trend is mostly caused by low cod prices and high production costs.

Cultivation of shellfish has also experienced a negative trend in recent years. In 2012, a small rise in quantity of 4 per cent resulted in 2 000 tonnes of produced shellfish. The price level fell substantially for all species except blue mussel, which more than halved the first hand value. In 2012, the value of shellfish reached NOK 11 million compared to NOK 25 in 2011.