Strongest income rise in the north

Households in the northernmost counties saw the strongest rise in equivalent income after taxes from 2010 to 2011. Income grew fastest in Nordland, where household income rose by 3.8 per cent in real terms. 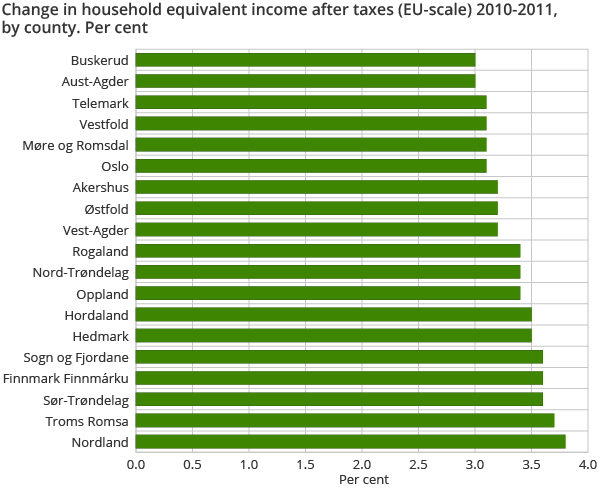 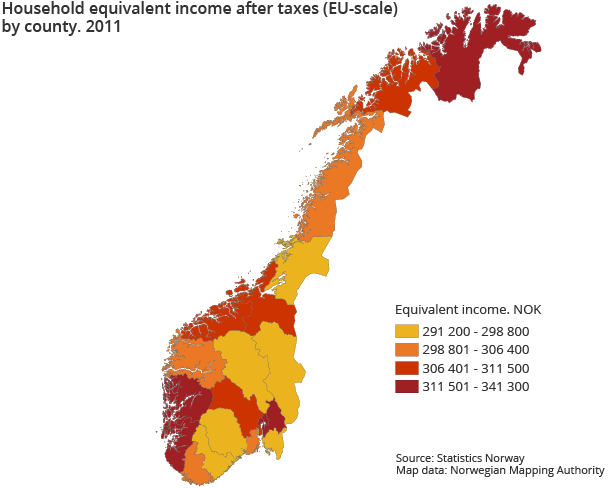 Median equivalent income after tax grew by 3.3 per cent in the population at large between 2010 and 2011 in real terms. Household income grew fastest in the three northernmost counties in Norway and in Sør-Trøndelag, while the slowest income growth was experienced by households living in the counties Buskerud and Aust-Agder.

In a longer time perspective, Rogaland is the county with the strongest rise in household equivalent income. From 2004 to 2011, median income grew by roughly 27 per cent in real terms in this county. On the other hand, Akershus, Oslo and Østfold saw the weakest growth in income, by slightly less than 20 per cent in real terms.

In order to be able to compare the incomes of different types of households, the household income is normally adjusted using equivalence scales or consumption weights. In this way, the income is calculated after tax per consumption unit. These consumer weights take into account that large households need higher incomes than small households in order to have an equivalent standard of living, and also that large households will benefit from economies of scale with regard to some goods (e.g. TV, washing machine, newspapers, electricity costs etc.). There are numerous types of equivalence scales but there is no consensus of opinion on which scale is the best. In these statistics, the EU scale or the ’modified’ OECD scale is used. This is the most commonly used scale in Europe today.

Some of the figures from households' income geographic distribution are available as open data with API.