Norwegian families with children received a total of NOK 35.2 billion in cash transfers in 2013. In real terms, this was about the same amount as the year before. Payments of family allowances and cash for care were lower than in 2012, while payments of parental benefit on birth increased. 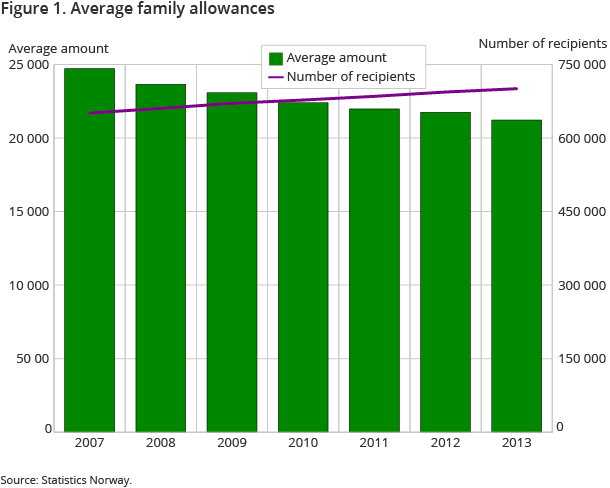 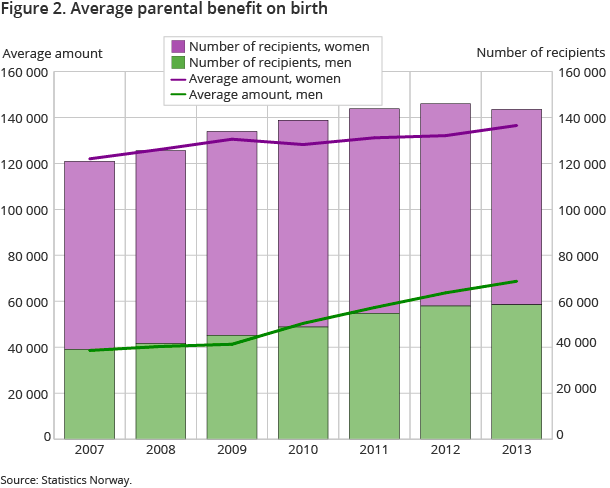 Cash transfers to families with children consist of:

Among the different payments, parental benefit on birth constituted the largest sum in 2013, with NOK 15.7 billion.

Parental benefit on birth constituted the largest payment among the different cash transfers to families with children in 2013. In total, NOK 15.7 billion was paid in 2013; an increase of two per cent from 2012, measured in current prices. Since 2007, the total payments of parental benefit on birth have increased by 36 per cent, or NOK 4.2 billion. This can largely be explained by the increase in the duration of the benefit period in recent years and the extension of the paternity leave for fathers. The average amount that recipients of parental benefit received also increased from 2007 to 2013, for both men and women. This is illustrated in figure 2. At the same time, the amounts received by fathers have increased compared to the amounts received by mothers. In 2007, women who received parental benefit on birth received on average three times as much as men receiving the same transfer. By 2013, this was reduced to twice as much.

Fewer recipients of cash for care

Families in Oslo received most

The average payments of cash transfers per child varied across the different counties in 2013. Families with children living in Oslo received the highest average amount of cash transfers per child; NOK 38 100. One reason for this is that single providers in Oslo have more children on average than single providers in the other counties and they also receive more in cash for care. The average payments per child were lowest in the county of Hedmark, with NOK 28 100 in 2013.

All amounts in constant prices Open and readClose

All amounts in this article are measured in constant prices and thus adjusted for the changes in the consumer price index (CPI).