One in six living in block of flats

According to the 2011 population and housing census there were 2 205 000 occupied dwellings in Norway on census day, 19 November. A total of 23 per cent were block apartments, meaning that 17 per cent of all inhabitants lived in a block of flats. Sixty per cent lived in a detached house. 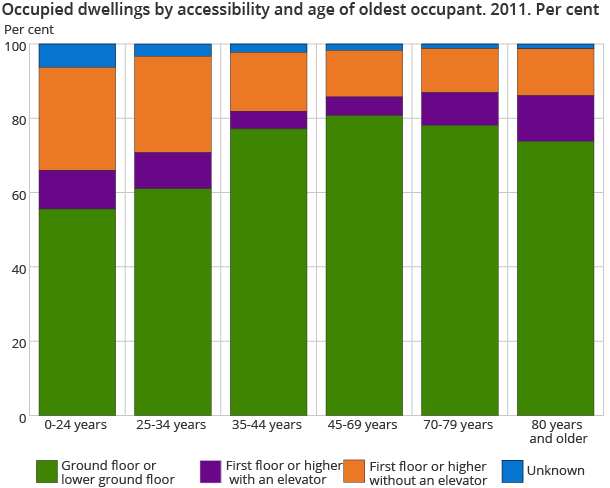 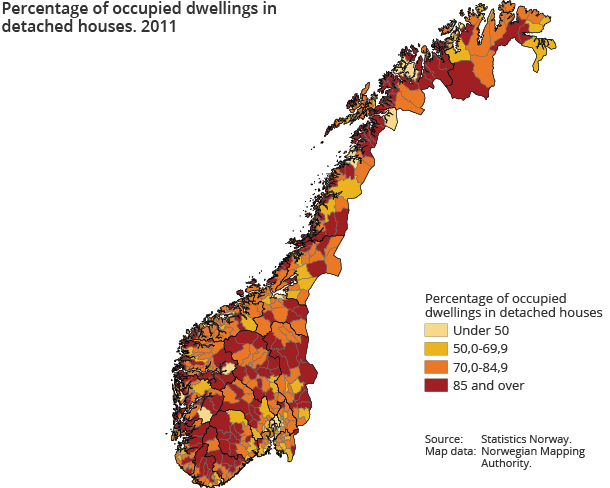 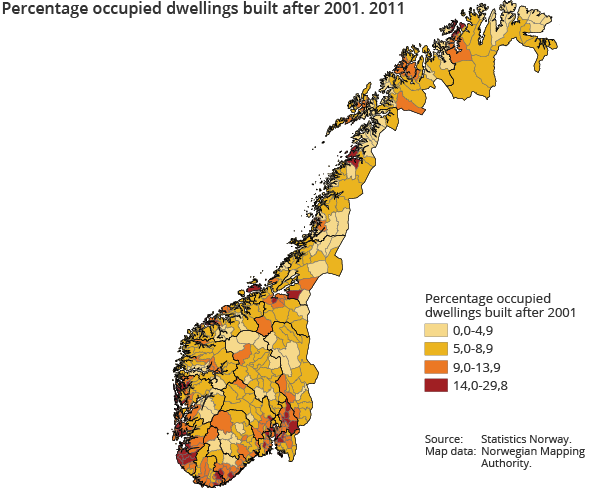 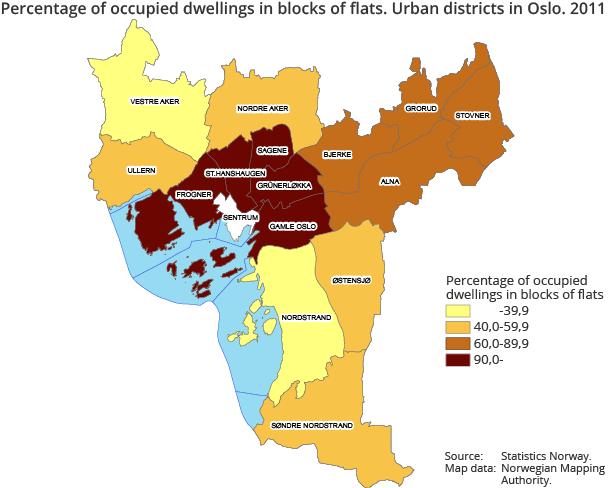 This is the first Norwegian housing census to be based solely on register data. This means that no information has been collected directly from the households using questionnaires. The change in data collection method may have impacted the comparability with the 2001 census

Detached houses most common in the majority of municipalities

In Oslo, as much as 72 per cent of all dwellings were block apartments, meaning that 62 per cent of all residents in the capital lived in a block of flats. However, there were large differences between urban districts. In the inner city, between 85 and 95 per cent lived in a block of flats, while in the suburban districts of Oslo this was much less common. Bergen had the second largest portion of dwellings in blocks of flats, with 42 per cent. Also in Bergen the percentage was largest in the more central urban districts.

The percentage living in a block of flats was highest among persons aged 20-39 years and persons 80 years and older. More than 20 per cent in these age groups lived in block apartments. The percentage living in detached houses was highest for persons aged 40-69 years and persons below 20 years. Type of dwelling is related to size of household. Small households are most common among young adults and the elderly.

Many new dwellings in suburban areas

Small dwellings in Oslo, large ones in Western Norway

In total, 15 per cent of all dwellings had a utility floor space of 200 square metres or more. Among counties, Rogaland, Sogn og Fjordane and Møre og Romsdal had the highest percentage of large dwellings. Out of 18 municipalities with more than 30 per cent large dwellings, 13 were located in one of these counties.

There are also regional differences in floor space for dwellings of the same type. For detached houses, Finnmark andTroms had the highest percentage of small dwellings, less than 80 square metres. The highest percentages of large dwellings, 200 square metres or more, were found in Oslo and Rogaland. In Oslo there were substantial differences between urban districts. In some of the western districts, more than half of all detached houses had a floor space of 200 square metres or more. In the inner city east the corresponding percentage was 16.

Most crowded dwellings in Oslo

Density standards for dwellings could be measured by relating utility floor space to the number of occupants. Crowded dwellings are then those with less floor space per occupant. In total, 12 per cent of all dwellings had less than 30 square metres per occupant. The portion was highest in Oslo, with 22 per cent. This is not surprising since Oslo has many small dwellings. Of the remaining 38 municipalities with a percentage above the national level, we find the cities of Bergen, Trondheim, Tromsø, Drammen, Ålesund, Bodø and Moss and 10 municipalities in Akershus, but also some less central municipalities.

Many elderly have to climb the stairs

In total, 600 000 persons, 12 per cent of the total population, were living on the first floor or higher without an elevator in the building, The percentage for persons 80 years and older was also 12, meaning that almost 25 000 persons aged 80 years and older live in dwellings with reduced accessibility.

As opposed to the previous censuses, the 2011 housing census also gives figures for the total number of dwellings. On census day there were a total of 2 416 000 dwellings in Norway. Statistics on unoccupied dwellings are not published, see information below.

Different data collection methods in the 2001 census (questionnaires) and the 2011 census (registers) impact comparability for all dwelling variables. Comparability is best for type of building and year of construction. For utility floor space, figures are less comparable. For number of rooms there is some uncertainty in figures from both censuses, and for a few municipalities the effect may be substantial. More information is available in About the statistics. 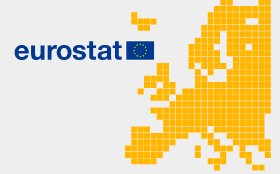