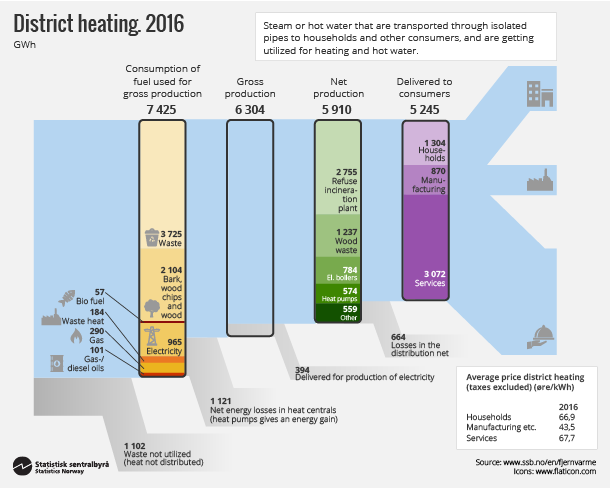 About half of district heating is generated from waste

Waste incineration is the main energy source for district heating. In 2016, about 50 per cent of district heating, or 2.8 TWh, was produced from waste. The second largest source of energy was waste wood facilities, with a share of around 21 per cent (1.2 TWh).

The term “gross production of hot water and steam” has been changed in the 2016 statistics and for previous years. Previously, this included production of district heating and steam, heat used for electricity production and heat that is not distributed. Heat that is not distributed is mainly heat from waste incineration, which, for various reasons, is cooled without being utilised as district heating. The reason why this was removed from the term “gross production” is that it is not utilised for energy purposes.

Another change in published figures is that waste incinerated without the heat being utilised is now deducted from the fuel consumption in district heating production. Since this is heat that potentially could be utilised, we have chosen to show this as additional memo item information (see tables). The calculation of the waste consumption to be deducted is based on the amount of "heat not distributed" and the ratio between waste consumption and total heat production in refuse incineration plants.

Since 2013, the time series on consumption, sales incomes and average price of district cooling have been included in the statistics publication.