Norwegian industrial managers report a production level increase as well as growth in the total stocks of orders in the second quarter of the year. The positive trend is expected to continue in the third quarter.

The business tendency survey for the second quarter of 2019 shows continued growth in total industrial production, but growth is somewhat weaker compared to the first quarter of 2019. The growth is particularly strong among producers of consumer goods and capital goods who report increased production. Producers of intermediate goods report moderate activity growth in the second quarter.

The industrial leaders also report increasing growth in employment in the second quarter of 2019. The increase in employment is particularly strong for capital goods. There is reason to believe that this is related to the growth in oil investments. Producers of intermediate goods and consumer goods also report employment growth.

For more than two years now, growth has been reported in price levels in the home and export markets for manufacturing as a whole. It should be noted that the growth rate in export market prices is now more moderate than in the previous quarter. Producers of consumer goods reported the highest growth rate for prices in both markets.

Growth is expected in the third quarter

The general outlook for the third quarter of 2019 is clearly positive for manufacturing as a whole, but the numbers of leaders with an optimistic view of the coming quarter is somewhat lower than in the previous survey. The indicator for future investments also supports this optimism since continued growth is reported for approved investment plans.

The positive picture is supported by expectations of solid growth in new orders and total stocks of orders for the third quarter. On the other hand, the growth rate in export market prices is expected to decrease somewhat in the third quarter.

The share of managers reporting that weak demand and strong competition were limiting factors for production was reduced in the first quarter of 2019. At the same time, there is an increase in the numbers of leaders who report that a lack of qualified labour is a challenge to increasing production further.

Figure 6 below shows how the indicators that represent resource shortage have increased since the lowest level in 2016, while demand and competition represent a minor challenge to manufacturing. 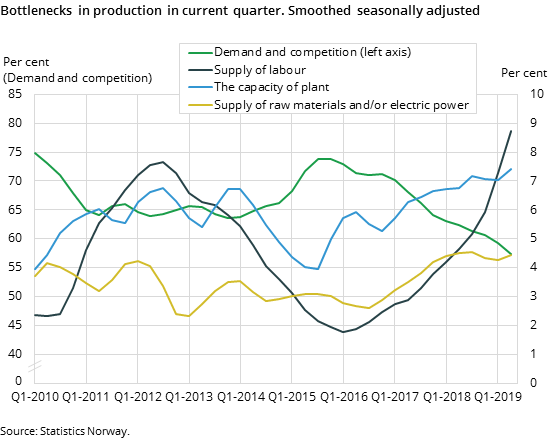