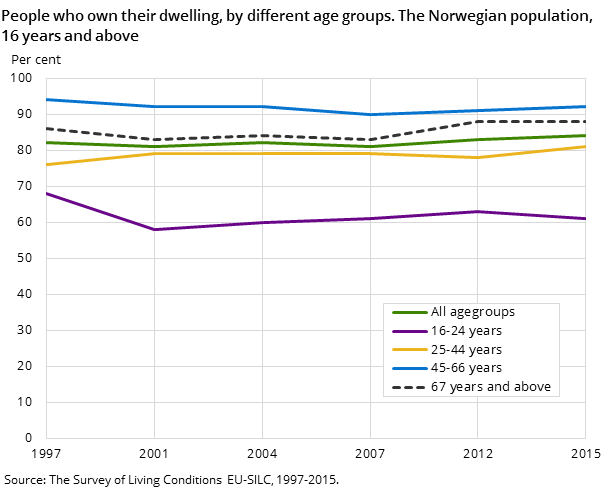 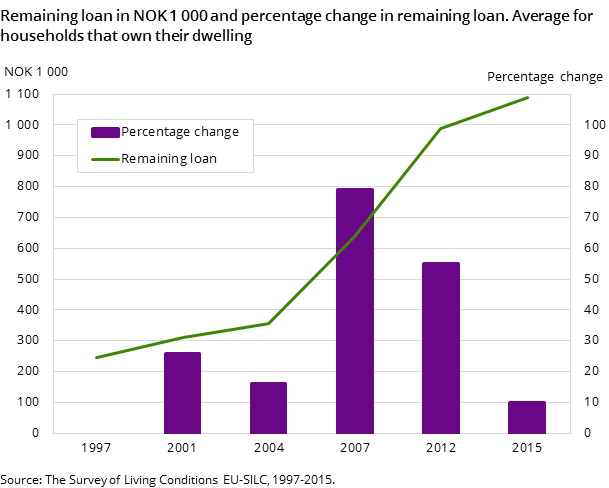 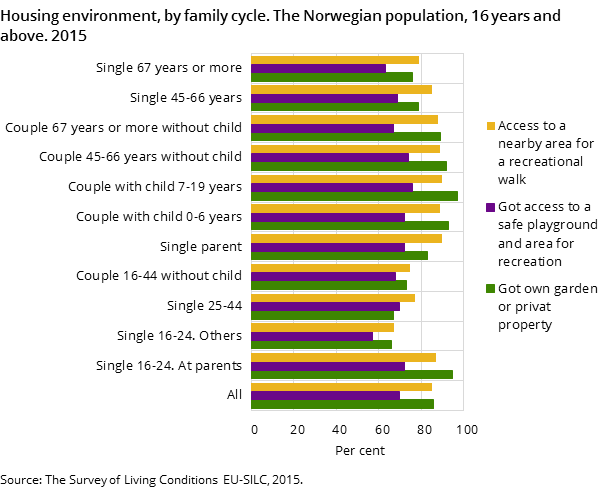 Couples, especially couples with children, are owners to a greater extent than others, especially when compared with people who are single and single parents. Ninety-eight per cent of couples with children aged 7-19 years are owner occupier households. Among couples with children aged 0-6 years, the share is slightly lower (89 per cent), but still above the average for the population as a whole. In comparison, the share of owner occupier households among single people aged 45 years and older and single parents is below the population average (77-73 per cent).

Only 7 per cent of the adult population live in an overcrowded dwelling. This is roughly the same share as in previous years. The proportion that lives in a very spacious dwelling has also remained relatively stable over the period 1997 to 2015. There is a declining proportion that perceives their dwelling to be too small. The percentage that reports a lack of space has decreased from 14 per cent in 1997 to 9 per cent in 2015.

Ninety-eight per cent of the population are satisfied with the dwelling they live in. The Survey of Living Conditions EU-SILC also shows an improved housing environment. While 77 per cent of the population aged 16 and above had a garden or private property in 1997, the corresponding figure in 2015 is 85 per cent. There is also a higher proportion that has access to a safe playground and area for recreation and to a nearby area for a recreational walk in 2015 than in the preceding year.

To make sure that the statistics is representative, a non-response weight is used. In the first publication of this statistics, this weight did not adequately adjust for education. The article and figures are now adjusted according to this. The most important changes are an increase in paid rent, and a small correction of the share of home owners. From 1997 to 2015, the share of owners previously said to be increasing, is now stable. Other indicators are less affected. Figures for 2012 are also corrected, but to a smaller degree.