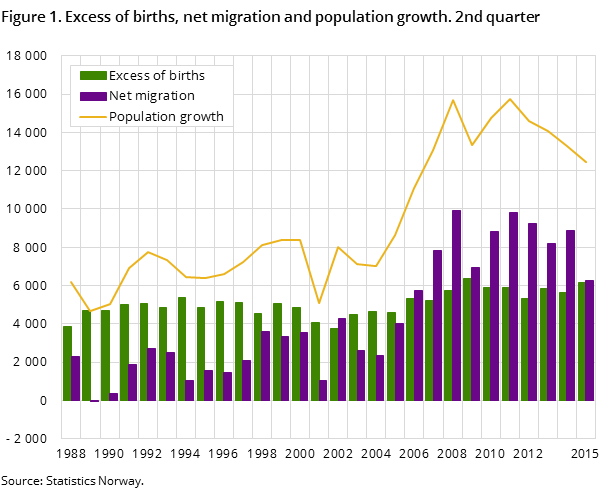 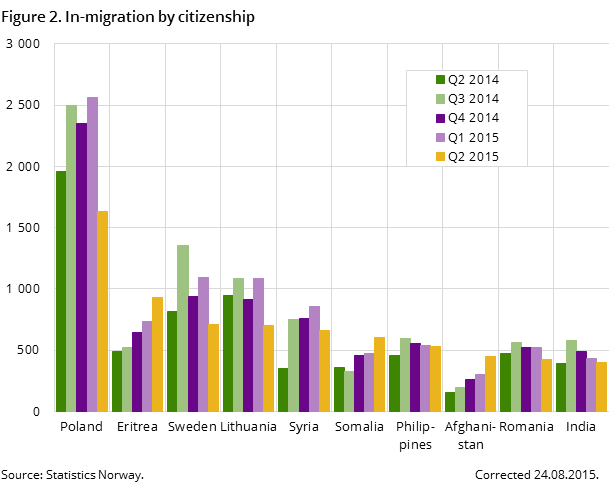 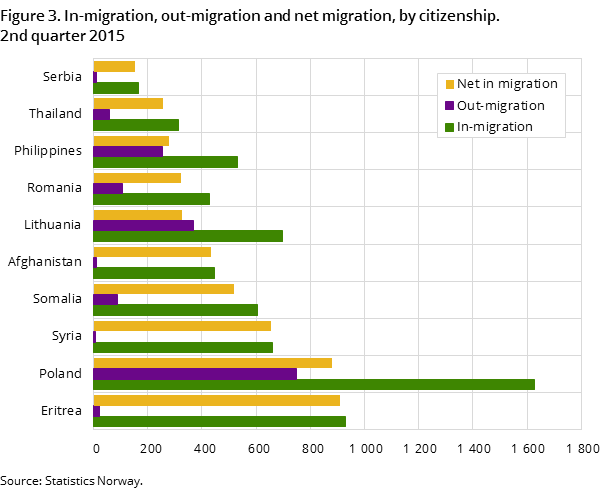 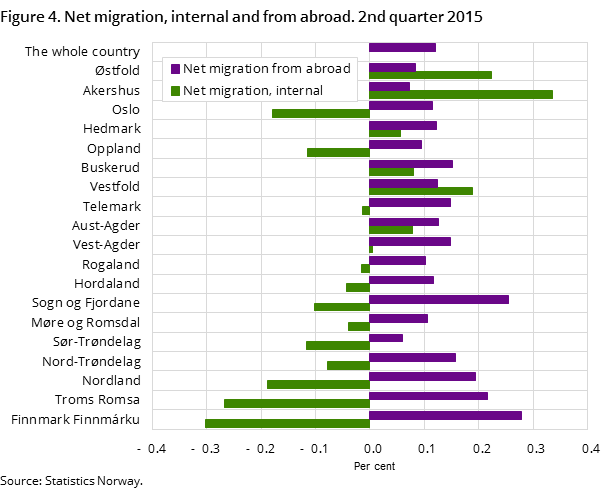 About 30 per cent of the out-migrations registered are due to the ongoing clearing-up in the Central Population Register by the Tax Administration of out-migrated persons who no longer live in Norway. Net migration in the 2nd quarter is the highest in any quarter since the 2nd quarter of 2009. Net migration decreased by 3 000 compared to the first six months last year.

Net migration of citizens from Eastern Europe, who mainly immigrate due to labour, is slowing down, while net migration from countries with conflicts is increasing. The Poles are still the largest group of foreign nationals who immigrated to Norway in the 2nd quarter, but due to the fact that many Poles were registered as out-migrated in the same period, citizens from Eritrea made up the largest group in terms of net migration.

The list of countries with high net migration shows that citizens from Eritrea, Syria, Somalia and Afghanistan followed. Very few of these out-migrated.

The population growth is still highest in Akershus

A total of 15 800 children were born in the 2nd quarter and 9 700 persons died. This is 200 fewer deaths and somewhat more births compared to last year. Almost all counties had population growth in the 2nd quarter, except Oppland. The counties around the Oslo Fjord had the highest relative population growth. As last year, Akershus had the highest growth with 3 200 persons, followed by Vestfold and Østfold.

Oslo, Rogaland and Hordaland had the highest birth surplus, while Hedmark had a birth deficit in the 2nd quarter.

More persons moved from than to Oslo

All counties had an immigration surplus from abroad, but particularly Oslo, Finnmark and Troms.

Looking back at the year so far, we found that the population growth is the lowest since 2007 and net migration is the lowest since 2006. About 3 100 persons immigrated to Norway and about half as many out-migrated. Almost 30 000 children were born and about 21 000 persons died. The birth surplus is thus 8 700. The birth surplus and the net migration combined make a population increase of nearly 24 000 or 0.46 per cent of the population for the first six months.