During the first quarter, the population increased by 12 400, to 5 063 700 on 1 April. This is the smallest increase since the first quarter of 2007, and is mostly due to a decrease in net migration. However, the excess of births also decreased compared with the first quarter in the three preceding years. 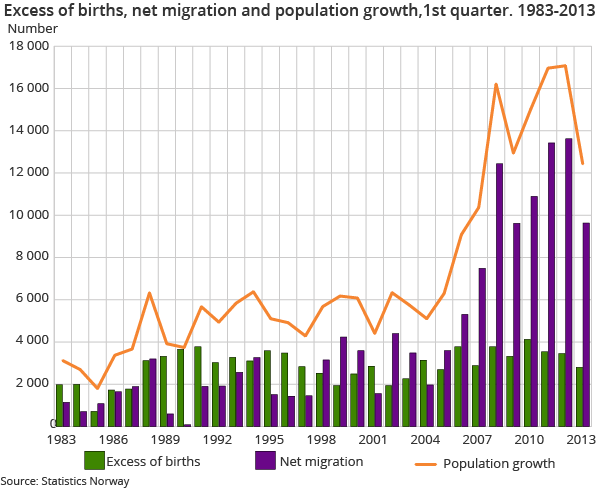 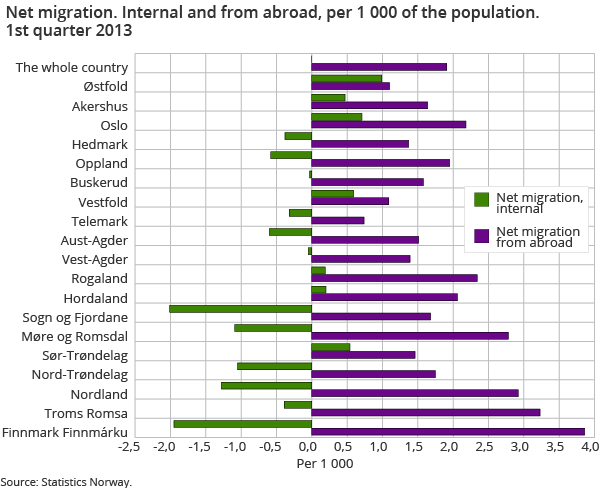 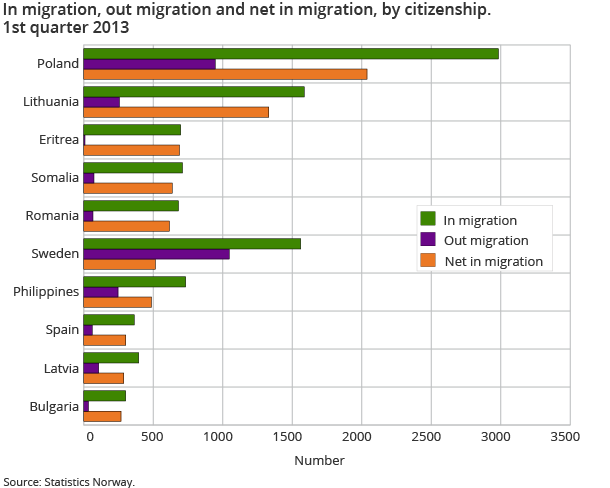 Around 3 000-4 000 of the 9 300 out-migrations most likely relate to persons who emigrated a long time ago and did not report their migration to the population register. There has been a build-up of such cases and the Tax Administration carries out ongoing efforts to rectify this in the Central Population Register. These efforts have become common place in recent years, but there have been far more out-migrations during this latest quarter.

With a growth of nearly 3 000, Oslo had the greatest increase in population during the first quarter, both in absolute figures and in relation to the population. This constitutes around a quarter of the entire population increase.

All the counties, except Telemark and Sogn and Fjordane, had a population growth in the first quarter. In the counties Hedmark and Oppland the growth was so small that the total population was more or less unchanged from 1 January to 1 April.

Swedish citizens represented most of the emigrations among foreign citizens, with about 1 000 out-migrations, giving a migration surplus of 500. The largest net migration was in the groups with Polish and Lithuanian citizenship, with more than 2 000 and 1 300 respectively.

Twelve counties had a migration loss to other counties. The loss was biggest in Nordland and Møre og Romsdal, with 310 and 280 more out- than in-migrations respectively. Viewed in relation to the population, Sogn og Fjordane and Finnmark had the largest losses in internal migration.

Seven of the counties had an internal migration gain, and the largest gains in relation to the population were in Østfold and Oslo.

All counties had a migration surplus from abroad. In Oslo, the net in-migration was 1 400. Rogaland and Hordaland each had a net migration from abroad of 1 000. In relation to the population, Finnmark and Troms had the largest gains in net migration.