This article was originally written in Norwegian and published on www.ssb.no 19 October 2015.

Immigrants move to Norway for various reasons: some have work permits, some come here to study, some are fleeing war or persecution and are seeking protection in Norway, while others want to reunite with or establish a family. In the period 1990-2014, almost 700 000 people immigrated from non-Nordic countries to Norway. Four out of ten were family immigrants. A further three out of ten immigrated to Norway to find work, two out of ten were refugees and one in ten came to study. 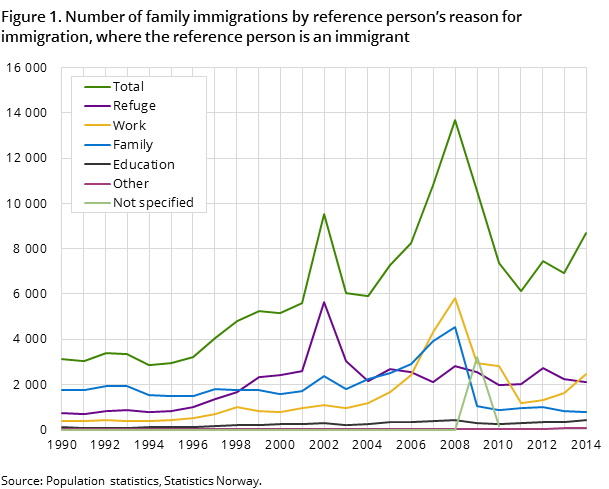 Until 2002, the number of immigrants moving to Norway for the purpose of reunification and establishment was roughly the same. Since the turn of the millennium, family reunifications have seen a significant increase. This is a result of the greater influx of migrant workers from countries such as Germany, and in particular the EU countries that joined the EU as part of the expansions in 2004, 2007 and 2013. In 2004, 4 400 immigrants came to Norway for purposes of reunification, and since 2007 the figure has remained at around 10 000 a year. In 2014, 12 300 immigrants were reunited with their families.

The number of immigrants who came to Norway for purposes of establishment increased from 1 600 in 1990 to 4 900 in 2002, but has since fallen slightly, with 3 900 in 2014. The majority of the new labour immigrants are men, so the majority of family immigrants are therefore women looking to reunite with their husbands.

Most family immigrants from Poland, Thailand and Somalia

As shown in Figure 2, most of the family immigrants in the 25-year period we are studying are from Poland, followed by Thailand, Somalia and Iraq. However, the type of family immigration varies from country to country, and the two largest groups clearly illustrate these disparities: while the majority of Poles have come here for family reunification in recent years, most Thais are here for family establishment. 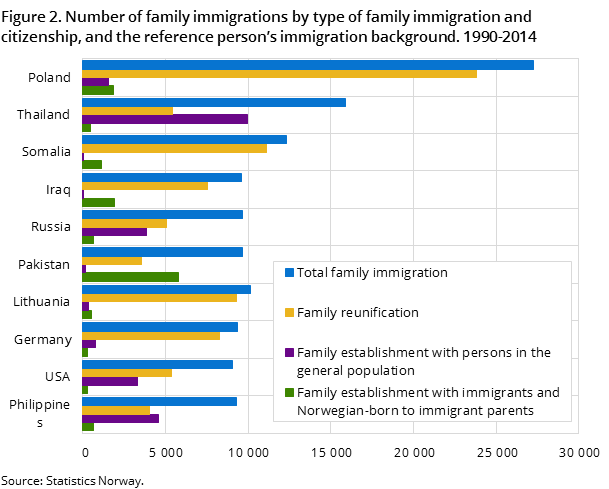 For the period 1990-2014 as a whole, most family establishment immigrants were from Pakistan. In 2014, the number who came here for purposes of family establishment and reunification was roughly the same; 185 and 165 persons respectively. The virtual halt in labour immigration in 1975 and limits on the number of asylum seekers and refugees have also led to a drop in reunification immigrants from Pakistan.

The majority of family immigrants, both for reunification and establishment purposes are women. In the period 1990-2014, around 164 000 women from non-Nordic countries came to Norway for purposes of family immigration, compared with just 84 000 men. Of the family reunifications, 99 000 were women and 61 000 were men, and among those who arrived through family establishment, 65 000 were women and 23 000 were men. Among the immigrant groups in Norway, the Turkish family immigrants are the exception in that more men than women arrived through family establishment in the period 1990-2014.

In the summer of 2014, the Ministry of Justice and Public Security initiated a consultation process for a proposal to introduce a 24-year age limit for family establishment. The age limit will apply to both spouses. The aim is to prevent forced marriages and to ensure that the couple can support themselves. The proposal is currently under consideration by the Ministry of Justice and Public Security.

An analysis of family establishments where the reference person (the person that the immigrant is coming to Norway to establish a family with) is in the age group 18-23 years, shows that numbers have been steadily falling since the turn of the millennium. The peak was in 2002, when the figure exceeded 600, falling to 200 in 2014.

The number of establishments with an immigrant in the age group 18-23 years saw an increase until 2002, when it was around 300. The figure remained at 300 for some years, before decreasing slightly every year, dropping to just under 100 in 2014. For immigrants who establish themselves with someone in the general population, the number remained stable at just over 100 until 2007, falling to 30 in 2014.

Far more of the immigrants who came to Norway to establish a family are under the age of 24 than the reference persons. These immigrants total around 600, which corresponds to less than 1 per cent of the total immigration, and 14 per cent of family establishment immigrants.

Since the marriage age is generally much lower for women than for men, it is not surprising that the vast majority (554 persons) in this group of family immigrants under the age of 24 are women. Of the 600 young immigrants in 2013, 76 (13 per cent) immigrated to a reference person who was also younger than 24, and 525 (87 per cent) came to a reference person who was 24 or older. 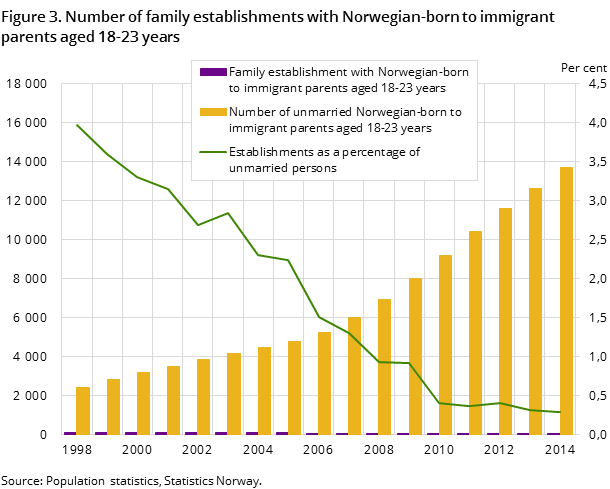 Most establishments were with young Pakistanis

With regard to Norwegian-born to immigrant parents from Pakistan, the number of family establishments between a Norwegian-born to immigrant parents and a Pakistani has not increased, despite the increase in the number of unmarried persons over the age of 17. This trend continues. At its peak, the figure was 73 in 2003, while in recent years the annual figure has been stable at around 20, falling to 11 in 2014, as shown in Figure 4. 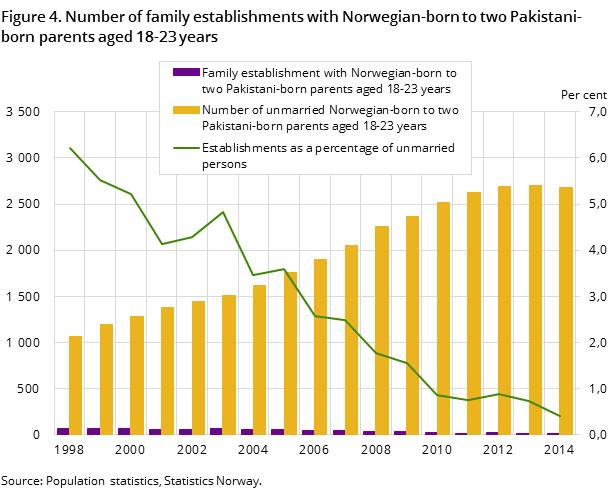 The fall in the number of marriages in this group is assumed to be linked to the growing pool of potential spouses in Norway with a similar background. Changes in legislation could also be a factor. In 1998, immigrants who wanted to find a spouse and whose only criteria were that their partner was over the age of 18, Norwegian-born to immigrant parents from Pakistan, and of the opposite sex, did not have such a big choice in Norway. Now the domestic "marriage market" for young people with an immigrant background is much larger, and the average age at marriage is also increasing.

An analysis of the individual years from 1999 to 2014 has shown that the number of Turkish citizens who have immigrated to Norway to establish a family with a reference person in the age group 18-23 years has varied considerably. A total of 115 came to Norway in 2002, and since then the figure has been decreasing. In 2014, the corresponding figure was 25, as shown in Figure 5.

In the same way as for the Pakistani group, a decline can also be seen in establishments among those with a background from Turkey despite an increase in the number of young unmarried persons. Once again, this can be partly explained by the fact that the pool of potential spouses in Norway has grown, and that more people are choosing to postpone marriage until they are older. 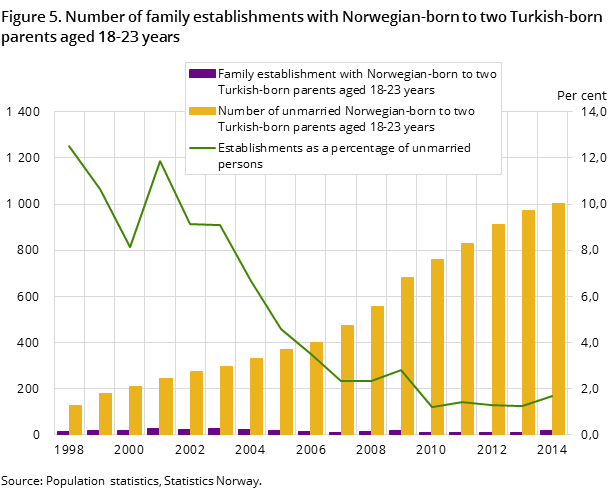 The figures concerning reason for immigration provide an overall statistical profile of the many different experiences immigrants bring with them to Norway – from sad stories of fleeing persecution to happy stories about love. A breakdown of the various reasons for immigration as a share of the non-Nordic immigration shows some clear features. Following the EU expansions, the share of family immigrants has become increasingly smaller, while labour immigration has steadily grown.

This article was commissioned by the Ministry of Children, Equality and Social Inclusion.