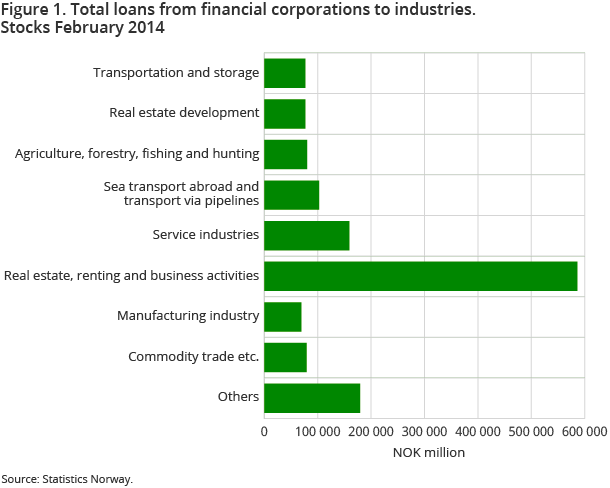 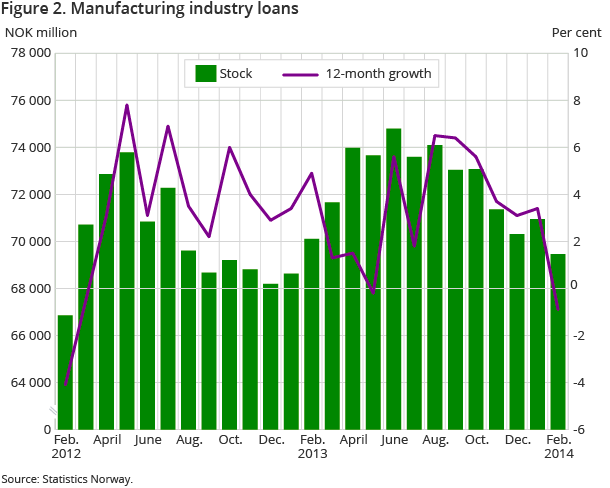 The growth in lending to industry was, however, positive in all periods after May 2013 and until end-January this year. Loans to enterprises in the manufacturing industry were 4,9 per cent of total industry loans at end-February.

Decline in loans to service industries

Loans from financial institutions to professional and financial services, business services and other service activities amounted to NOK 159 billion at end-February, unchanged from the month before. The twelve-month growth rate for this industry group was -0.8 per cent until end-February. The decrease stems primarily from lower borrowing within industry for professional and financial services.

Loans for sea transport abroad and transport via pipelines fell most

Loans from financial institutions to the international shipping and pipeline transport industry amounted to NOK 103 billion at end-February, down from NOK 107 billion at end-January. The twelve-month growth rate was negative in all periods after September 2012, and was -14.7 per cent until end-February.

At end-February this year, 63 per cent of loans to sea transport abroad and transport via pipelines were issued in foreign currency. Exchange rate fluctuations, thus, affect the value of these loans due to all amounts in the balance sheet being converted into Norwegian kroner. Changes in shipping loans must therefore be viewed in the context of volatility in exchange rates during the same period.