From end-November 2008 to November 2013, the Norwegian banks’ deposit-loan ratio increased from 62.6 per cent to 85.8 per cent. Bank deposits have become a more significant source of credit finance during this 5-year period. 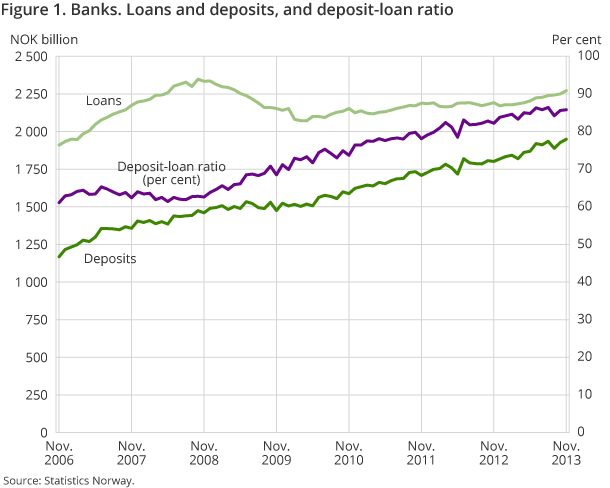 At end-November 2013, the banks’ customer deposits amounted to NOK 1 949 billion. This is an increase of NOK 147 billion, or 8.2 per cent, compared to the corresponding period in the previous year. Increased deposits from the household sector contributed to the increasing deposit-loan ratio . However, this increasing ratio is influenced by the transfer of loan portfolios from banks to mortgage companies. The portfolio transfer is an effect of the introduction of covered bonds issued by mortgage companies.

For the period November 2012 to November 2013, deposits from the households increased from NOK 880 billion to NOK 939 billion. This represents a 6.7 per cent growth throughout the past 12 months.

Variation in deposit-loan ratio for corporations

The banks’ customer deposits as a share of total loans to customers from banks and mortgage companies issuing covered bonds were 58.1 per cent at end-November 2013.

Exchange rate fluctuations will influence the dataOpen and readClose

As a large part of Norwegian banks’ funding is denominated in foreign currency, exchange rate fluctuations will influence our data.