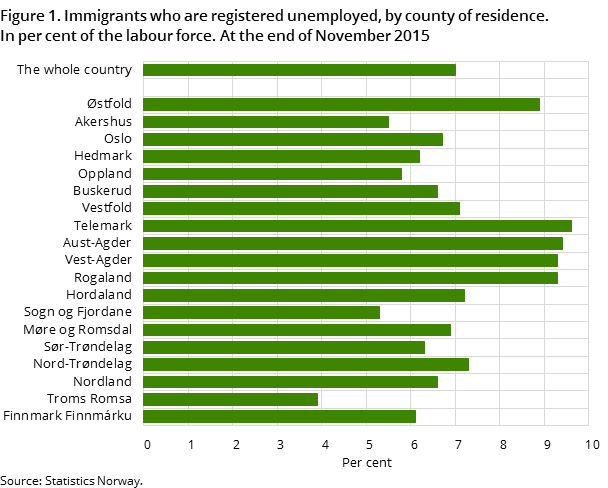 Who are included in the statistics?

The unemployment figures, which in these statistics are based on unemployed persons registered with the Norwegian Labour and Welfare Organisation, only consist of persons with permission to stay in Norway, and who are registered as residents in Norway (in the Central Population Register). The large number of asylum seekers who came to Norway during the autumn of 2015 are not included in these figures.

The unemployment rate of a group is calculated as a share of the labour force within that group. The labour force is the total number of employed and registered unemployed persons.

More than one third of the unemployed are immigrants

Norwegian-born to immigrant parents is still a rather small group of unemployed persons. This group constituted 1 072 registered unemployed persons in the 4th quarter of 2015. A large share of this group is aged 15-29 years, and the unemployment rate within this age group was 4.2 per cent, which was 3 percentage points below the immigrant group at the same age (at 7.2 per cent) and 1.1 percentage points higher than the corresponding age group in the rest of the population (at 3.1 per cent).