The number of registered unemployed immigrants settled in Norway increased by 2 350 from August 2013 to August 2014. In the same period, the number of participants on labour market schemes fell by 2 600. 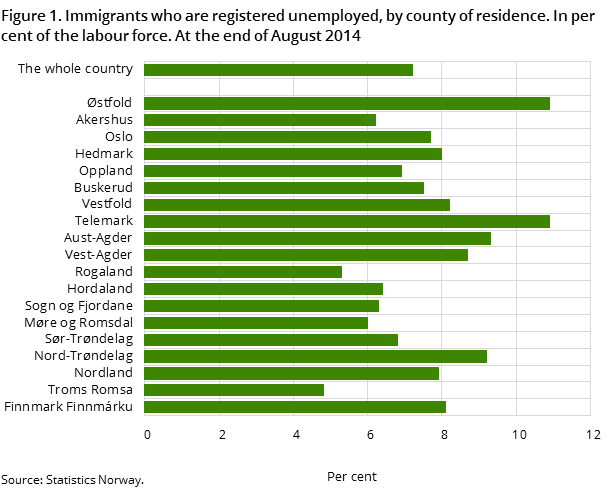 In total, approximately 78 900 persons were registered as unemployed in the 3rd quarter of 2014. Of these, almost 28 800 were immigrants, which is a share of 36.5 per cent of the total unemployed.

In absolute numbers, there were 2 350 more immigrants unemployed in August 2014. Among them, 1 450 came from the EU countries in Eastern Europe, and they were mainly men. The total number of registered unemployed persons increased by 5 400. Hence, immigrants constituted 43.5 per cent of the growth in the unemployment from August 2013 to August 2014.

The remaining groups had considerably lower rates, as is normally the case. Among immigrants from North America and Oceania the unemployment rate was 3.6 per cent, while those from Western Europe and the Nordic countries had 3.3 and 3.0 per cent registered unemployed respectively.

Male immigrants had an unemployment rate of 6.6 per cent in the 3rd quarter, while the corresponding share for female immigrants was higher, at 8.0 per cent. In the rest of the population, the gender disparity was reversed, with 2.2 per cent for men and 2.1 for women. The growth in the unemployment rate was equal among men and women both within the immigrant group (0.2 percentage points) and the rest of the population (0.1 percentage point).

fig-2014-11-06-01-en; Immigrants who are registered unemployed as a percentage of the labour force by county of residence. At the end of August 2014.

The decline in the number of participants on labour market schemes continues. From August 2013 to August 2014 there were 2 600 fewer participants among immigrants. Among participants in total, the decrease was almost 5 100.

A total of 2 960 immigrants were participants on labour market schemes in the 3rd quarter of 2014, making up 45 per cent of the total participant group. The majority came from Asia, Africa and the eastern EU countries.

Norwegian-born to immigrant parents is still a rather small group of unemployed persons despite some growth during the last year. This group constituted slightly more than 1 100 registered unemployed persons in the 3rd quarter of 2014. The majority within this group are aged 15-29 years, and the unemployment rate among them was 5.4 per cent, which was 2.7 percentage points below the immigrant group at the same age (at 8.1 per cent) and 1.8 percentage points higher than the corresponding age group in the rest of the population (at 3.6 per cent).

The unemployment rate among Norwegian-born to immigrant parents and in the majority was unchanged, while immigrants had a slight decrease of 0.2 percentage points during the last year.