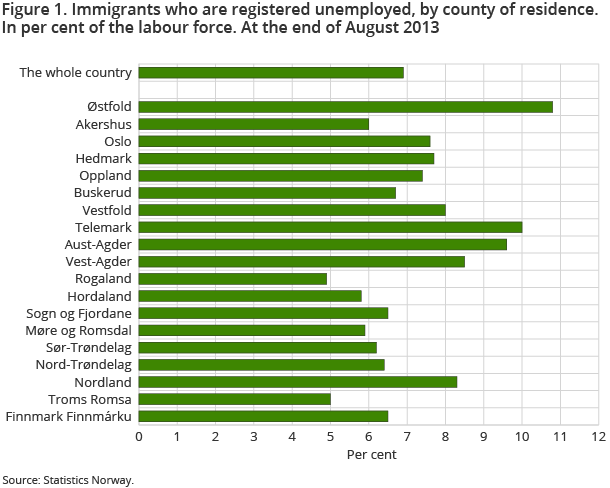 In absolute numbers, there were 3 345 more immigrants unemployed in August 2013. Of these, 1 694 came from the EU countries in Eastern Europe. In the rest of the population there were 1 732 more persons registered as unemployed.

Strongest increase among immigrants from EU countries in the east

Measured as a percentage of the immigrant population aged 15-74 years, the rate of participants on ordinary labour market schemes (job programmes) decreased from 1.1 per cent in the 3rd quarter of 2012 to 1.0 per cent in the 3rd quarter of 2013. In the remaining population, this rate was stable at 0.2 per cent. Immigrants from Africa and Asia had the highest participation rates at 2.0 and 1.4 per cent respectively. Female immigrants had a higher participation rate than male immigrants, with 1.2 versus 0.7 per cent.

A total of 5 430 immigrants were participants on labour market schemes. In total, 11 630 people participated in the 3rd quarter of 2013. Immigrants therefore constituted ca. 47 per cent of the total participant group.

Norwegian-born to immigrant parents is still a rather small group of unemployed. This group constituted slightly more than 1 000 registered unemployed persons in August 2013. The majority within this group are aged 15-29 years, and the unemployment rate among them was 5.4 per cent, which was 2.4 percentage points below the immigrant group at the same age (at 7.8 per cent) and 1.9 percentage points higher than the corresponding age group in the rest of the population (at 3.5 per cent).