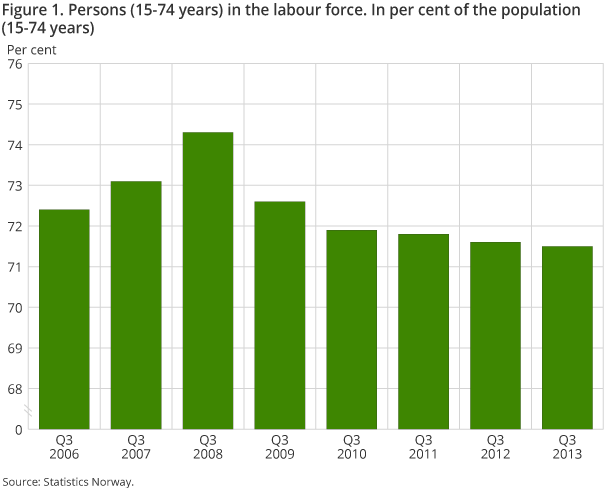 The Labour Force Survey (LFS) shows a decrease in labour force participation among persons aged 15-74 years from 72.4 per cent in the 3rd quarter of 2006 to 71.5 per cent in the 3rd quarter of 2013. Calculations by Statistics Norway show that this decrease is mainly due to the relatively large increase in persons aged 55-66 years. Even though the labour force participation in this age group has increased by 3.0 percentage points from 2006, it is still more than 20 percentage points lower than among persons aged 40-54 years.

A total of 57 000 persons were underemployed in the 3rd quarter of 2013, down 9 000 from the same quarter the previous year. The underemployed are part-time employees who have tried to find more work. The majority of underemployed persons are women. This must be seen in relation to the prevalence of part-time employment among women. The time the underemployed wanted to work extra in the 3rd quarter of 2013 corresponded to 20 000 full-time jobs. Adding the time that the unemployed wanted to work that quarter, the work wanted by these two groups corresponds to 103 000 full-time jobs – 7 000 more than the previous year.

Statistical agencies in other countries