Immigrants and the 2013 general election

Surge in immigrant Conservative voters, but most vote Labour

In the general election of 2013, over 60 per cent of voters with an immigrant background from Africa, Asia and Latin America voted for centre-left parties, with the Labour Party being the most popular. This share was even higher in earlier municipal elections. If we compare the general election in 2013 with the municipal elections in 2011, support for the Conservative Party among this group of immigrants has more than doubled. The voting pattern of those with a European immigrant background is more similar to other Norwegian voters, but support for Labour is also extensive among this group.

How did voters with an immigrant background vote, i.e. those born outside Norway and their Norwegian-born children, in the general election in 2013? The ordinary election surveys do not throw any light on this since their samples of the immigrant population are too small. Nevertheless, it is possible to gain some insight since a representative sample survey of immigrants in a parliamentary election was conducted for the first time in 2013.

Previously, such surveys were only conducted at municipal elections. The votes of foreign nationals - who were given the right to vote in 1983 - were recorded in the four municipal elections held between 1987 and 1999. In the local elections in 2003 and 2007, Norwegian citizens with an immigrant background were also included in the survey. Here the party choice was recorded for immigrants and Norwegian-born to immigrant parents who had Norwegian and foreign citizenship. Although this enables us to draw comparisons with the survey from the 2013 election, the basis for comparison is limited since foreign nationals are not entitled to vote in general elections.

As immigration has increased, so too has the number of voters with an immigrant background. The figure has almost doubled since 2005, and accounted for around 6 per cent of all voters at the general election in 2013. Voters with a European background (see textbox) accounted for about a third of all immigrants who were eligible to vote, while two thirds originated from Asia, Africa and Latin America. 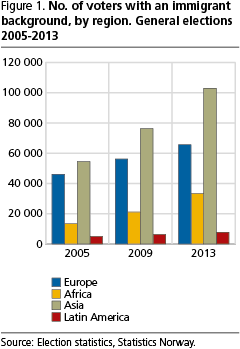 A distinction was previously made between immigrants with a western and non-west­ern background, but this is no longer practised by Statistics Norway. Slightly different definitions are used in this article, namely Norwegian citizens with a background from Europe, where we distinguish between countries within and outside the EU/EEA, and voters with a background from Asia, Africa and Latin America. The sample in the election survey also included a few voters from North America and Oceania, but these have been excluded for the purposes of this article since there were so few. Norwegian-born to immigrant parents have the same background as their parents in this survey.

Although the share of eligible voters with an immigrant background increases in each election, the immigrant votes do not make up the corresponding share of the total number of votes cast. Voter turnout in this group is significantly lower than among the general population, and has been around 50 per cent in the last general elections (see figure 2) - which is about 25 percentage points lower than among the general population. 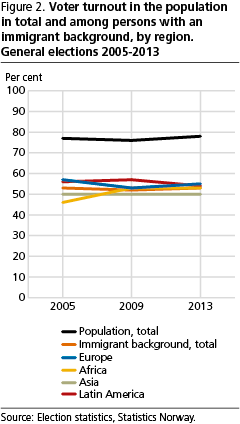 It should be noted that voter turnout varies considerably according to what country an immigrant is from. For example, only about one in every three eligible voters from Croatia, Macedonia and Kosovo cast their vote. Among immigrants from Sri Lanka, Somalia and Poland, participation is higher, with a turnout of around 60 per cent respectively. In previous elections, there has been a clear correlation between long periods of residence and a high turnout. Older age groups have also participated to a greater extent than the younger age groups.

These patterns are now less clear. Immigrants who have the right to vote for the first time now have a higher participation rate than immigrants who have been resident in Norway for 20-29 years. With regard to voters of African descent, the group with the shortest period of residence has the highest turnout, and the youngest voters (18-25 years) have a higher voter turnout than the elderly (60 years and over). In other words, the immigrant groups participating in elections have changed in recent elections - and this is also likely to affect voting patterns.

Who did the immigrants vote for?

Voting patterns of those from what is often referred to as “the global south” (Asia, Africa and Latin America) deviate more from those of the electorate at large than voters with a European background. In the 1990s, there were small disparities between how western foreign nationals voted and the overall election results. With regard to foreign nationals, the following was concluded in relation to the 1990s: “Voters with a western background (...) have supported the left-wing parties to the same extent as the general voting public in the last two elections (1995 and 1999). Support for the centre parties, however, has waned somewhat, in favour of the Conservative Party primarily.” (Bjørklund and Kval 2001, p. 63).

Among Norwegian citizens with a European immigrant background who voted in the general election in 2013, the centre parties were still under-represented, but to a much greater extent than was registered in the 1990s for western foreign nationals. The Progress Party was also under-represented in 2013 (see table 1). The Conservatives and, in particular, the Labour Party were the parties that benefitted from this. The disparities between 2013 and the late 1990s are mainly due to the fact that the composition of the western immigrants has changed, the element of countries from outside the EU/EEA has increased, and new EU countries from the former Eastern Bloc have been established as voter groups in Norway.

The voting patterns of those with an immigrant background from a European country outside the EU/EEA are in many ways similar to that of voters from the global south, with over half voting for the Labour Party. Voting to the left of centre is, however, slightly more common among voters with a background from Asia, Africa and Latin America than for those from Europe outside the EU/EEA. In previous election surveys, more thorough studies were conducted of voters who were previously characterised as non-western than immigrants from western countries.

The party distribution in 2013 of voters with a background from the global south is compared to the municipal elections in 2007 and 2011 in table 2 (see the textbox describing which groups are eligible to vote in the different elections).

The party distribution among foreign nationals with what was referred to as a non-western background in the 1990s was very similar to the distribution in 2007. What was striking in the period from the 1990s to 2007 was that about three out of four voters voted left of centre. At the local elections in 2011, however, a noticeable shift occurred in the left-wing parties. The Socialist Party experienced a drop in support and lost its position as the second largest party, with half of its voters from 2007 announcing their shift of support to the Labour Party in 2011.

Despite retaining a solid share of the votes, support for the parties to the left of centre among immigrants from the global south saw a decline from 2007 to 2013. However, a stable feature is that the men are more left-wing than the women (see table 2). The opposite pattern can be observed among voters generally, where women have been more likely than men to vote left of centre since the 1980s (Bergh 2008). It should be noted that the group of voters in general elections is different to the group of voters in municipal elections (see textbox).

Survey participants were eligible voters with an immigrant background who voted at the general election in 2013. The respondents were asked about voting in the election as well as a series of questions about their attitudes to various political issues. A sample of 2 000 individuals with an immigrant background was drawn, who according to the electoral roll actually voted in the election. Of these, 753 persons took part in the survey, which corresponds to a response rate of 38 - about the same level as a similar survey conducted in conjunction with the municipal elections in 2011. Of the 753 surveyed, 673 were immigrants, while 80 were Norwegian-born to immigrant parents. For more details about the survey, choice of methodology, sample plan, inbalances in the sample, error margins and weights, see the separate documentation report for the survey (Høstmark 2014, to be published).

One possible reason for the gender divide in politics among immigrants is the differing reasons for immigration. A majority of the women came to Norway as a result of family immigration, while a higher share of men were migrant workers and refugees. Among the women, we also find those who have married someone without an immigrant background and who are more likely to vote the same way as the general population.

Africans vote for parties to the left

The most left-wing voters - measured by support for the Labour Party and parties further to the left - are voters of African descent, followed by those with an Asian and Latin American background, as shown in table 3.

One possible explanation for this is that the Latin Americans have the longest period of residence among these groups. Among the voting immigrants from Latin America in our survey, 70 per cent have lived in Norway for 20 years or more, compared with 29 per cent of Africans and 47 per cent of Asians. This in turn can result in a voting pattern that is more similar to that of Norwegian citizens without an immigrant background.

Another indicator of integration (in addition to period of residence) is how many friends a person has without an immigrant background - a question that is asked in the survey (see textbox). If we take the sum of the categories “none or almost no one with an immigrant background” and “some, but well below half”, we find the majority - 59 per cent - of Latin Americans in this category, compared with 20 per cent of those with a background from Africa and 33 per cent with an Asian background.

What do the immigrants think?

For example, we find that there is extensive support for women’s right to choose abortions among Europeans, while the support is significantly weaker among Asians and even weaker among Africans. Support for euthanasia is also clearly greatest among the Europeans. A majority of all groups believes that gay men and women should be allowed to live the way they want, but this attitude finds least favour among voters with an African background.

In a classic economics question on accepting greater wage differentials, right-wing attitudes are mainly found among those of African and Asian descent. Most people in these groups believe that increased wage differentials should be accepted in order to increase the willingness of the individual to work hard.

Some questions reveal little or no disparities between the groups. However, with regard to the issue of refugees and immigrants’ rights to social assistance it is clear that Asians and Africans have the most left-wing views.

All in all, we find support for our assertion in an earlier edition of Samfunnsspeilet on immigrants: “Vote to the left, but are not left-wing” (Bergh et al, 2008). The explanation of the left-oriented voting pattern does not therefore lie in political attitudes, but rather in a collective idea that the parties to the left are defenders of the minorities (Bjørklund and Bergh 2013). The attitudes of voters with an immigrant background suggests that the parties to the right have the potential to win voters from this group. The election in 2013 was thus a sign of the Conservative Party’s growth potential.