The next municipal and county council elections are due to be held on 14 September, and for the first time in Norway’s voting history, the number of eligible voters will exceed 4 million. Voter turnout in local elections has been falling in Norway and most of Europe in recent decades. Four years ago, however, the number going to the polls in Norway increased, from 62 to 65 per cent. The share of the Norwegian electorate that exercises its right to vote is still lower than for our Scandinavian neighbours, and particularly Sweden.

Under the provisions of the Election Act (Valgloven), there is no specific turnout rate that needs to be achieved in order for an election to be declared valid. However, there is a widely-held view that a democracy needs a certain degree of engagement and participation in order to safeguard its long-term survival. There is a concern that political decisions are not considered legitimate when politicians have only been elected by a small number of voters. Concern has also been expressed for the legitimacy of decisions where participation does not represent all sections of society (see Klausen 2005 for an overview).

Statistics Norway conducts sample surveys on voting at elections. The electoral committees in municipalities are sent details of the respondents who were selected and who were listed on the National Population Register as resident at the specified address on 30 June. The electoral committee is then asked to check the electoral roll to see if these persons have voted, and to indicate this on the list and return it to Statistics Norway. Checking the electoral roll in this way gives more reliable estimates of voter turnout than information that is collected during interviews with eligible voters. Checking the electoral roll is a method that is more or less free of dropout errors and measurement errors.

Interview surveys on voting behaviour typically overestimate voter turnout. This is partly because people who vote in elections are more likely to participate in this type of survey (non-response error), and because some people lie about not voting as this can sometimes be frowned upon in society (measurement error) (see Zhang, Thomsen and Kleven 2013). Sampling uncertainties will apply to these samples.

In this article, we only comment on disparities that are statistically significant. Sample sizes for the surveys in this article are as follows:

At the last municipal elections four years ago, voter turnout rose by three percentage points, from 61 to 64 per cent (total result for municipal and county council elections was 64.5 per cent, with 64.2 and 59.9 per cent respectively). These local elections were held in the shadow of the terrorist attacks of 22 July. The perpetrator had a political motive for the killings and many saw his acts as an attack on Norwegian democracy. One of the responses to the attack was therefore to support democracy by participating in the elections (Berg and Christensen 2013).

Voter turnout is consistently higher in National Assembly elections than in local elections, both in Norway and the rest of Europe. Turnout in municipal and county council elections has always been lower than in parliamentary elections. The county elections have the shortest history and the lowest voter turnout. These elections started in 1975 and are held at the same time as the municipal elections.

Who has the right to vote in local elections? 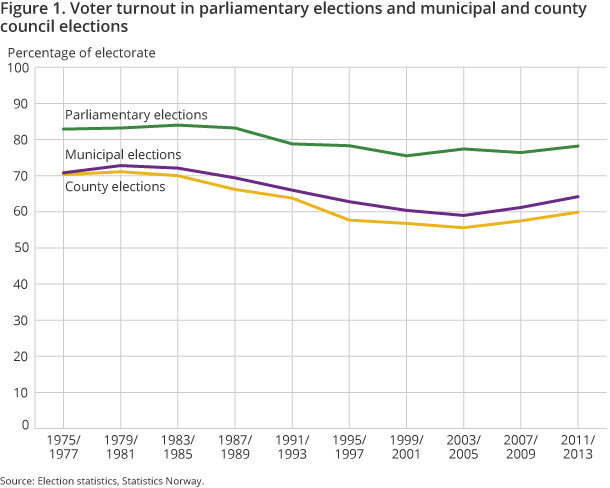 Norway around the European average

In contrast to national elections, there are no readily available European databases with information on local elections. It is therefore more difficult to compare voter turnout in local elections than in national elections in Europe. Based on data collected by the EU some years ago (2004-2008), we see that Norway’s turnout was roughly average compared with the rest of Europe (see Figure 2). This tendency has also been shown in earlier periods (Klausen 2005). In Belgium, voting in elections is mandatory. Unsurprisingly, Belgium has the highest voter turnout in Europe, with 90 per cent, but even there around 10 per cent of the population do not vote. Sweden and Iceland are also high on this ranking, with almost 80 per cent voter turnout in local elections. At the bottom is the UK, Portugal and Lithuania, where turnout is around 40 per cent. 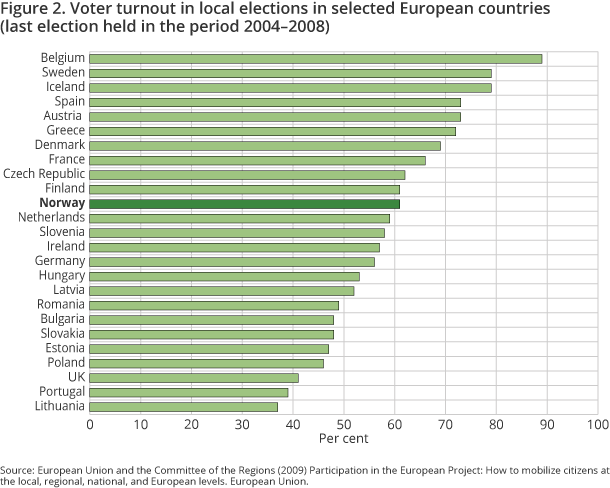 There are considerable variations in how local and regional elections are held throughout Europe. Some countries, such as Norway, hold the municipal and county elections on the same day. Other countries, such as Germany and the UK, hold municipal elections in different years for the individual regions. If Norway were to follow this electoral system it could mean a city council election being held in Oslo on 14 September 2015 and a municipal council election being held in Bærum on 7 February 2016, for example.

Figure 2 shows average figures for local elections held in various federal states and regions in countries such as Germany and the UK. At the other extreme, Sweden holds its local elections at the same time as its National Assembly elections.

There has been discussion about holding national, regional and local elections all on the same day in Norway, but a number of objections to this have been raised. The concern is that the dominance of national politics over municipal politics would become even greater, and local issues and local debates would be pushed into the background (Klausen 2005:368). There are also significant variations in how easy it is to join the electoral roll – the register of eligible voters. In Norway, a person is automatically included if they meet the voting criteria, whereas, in the UK for example, voters need to actually register themselves on the electoral roll. 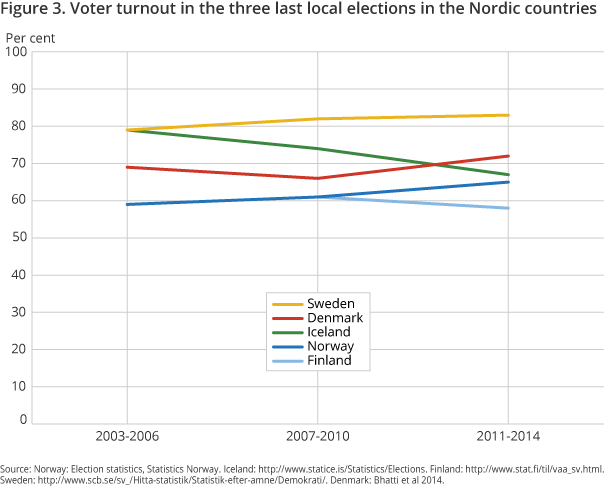 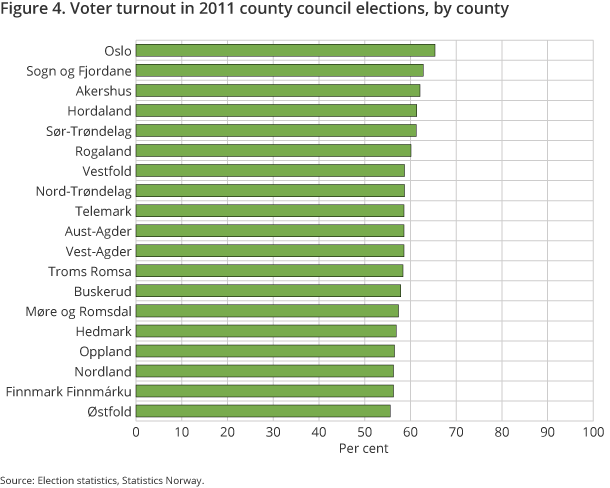 Large variation between the municipalities

Municipal and county council elections consist of more than 400 different elections for different municipal councils, district councils and county councils. Voter turnout varies considerably between the municipalities, much more so than among the counties (see Figure 5). In Fedje, 87 per cent of the electorate voted, while in Moskenes the corresponding figure was about 55 per cent; a difference of 32 percentage points. 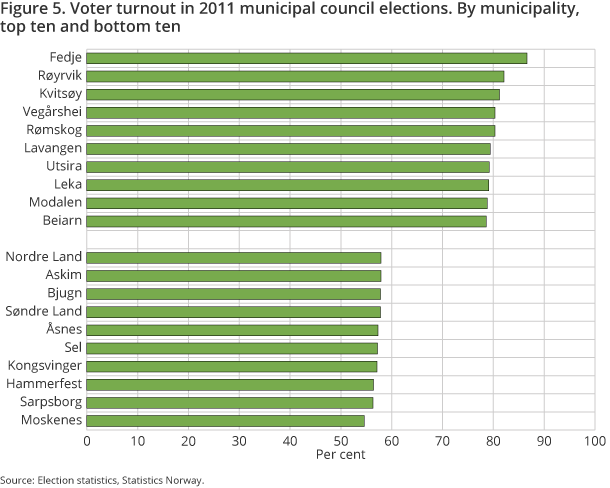 In the 2011 municipal elections, the county with the highest voter turnout was Sogn og Fjord, with 68 per cent. Østfold had the lowest turnout with 61 per cent; a difference of seven percentage points in the county breakdown. Turnout in local elections is relatively high in the populous counties Hordaland, Sør-Trøndelag, Oslo and Akershus. There is no clear geographic profile of voter turnout levels.

In the literature on voter turnout (see Aardal 2002 for an overview), political resources are cited as a major reason why some people vote and some don’t. The correlation is straightforward: the higher a person’s social status and the more integrated they are in society, the more likely they are to vote (Aardal 2002: 24). This so-called integration perspective on political participation is linked to the degree of integration as a member of society. For example, the workplace is an important arena for political awareness and learning (Sigel 1989). When a person retires from working life, they no longer have the formal contacts they once had. Furthermore, as people age their family situation changes; children move out, spouse dies, etc. We have therefore identified an inverted U-shape when examining voter turnout by age.

The conventional view of the elderly and voter turnout suggests that turnout decreases when a person retires from working life and wants to ‘enjoy their retirement’. However, this hypothesis ignores the fact that those who retire have undergone a political socialization and that political engagement has become a part of their personality. Analyses of time series regarding age and voter turnout show that turnout is relatively high among pensioners, and only starts to fall when they reach 80 (Berglund 2005, Kleven 2005, Berglund and Kleven 2010).

The literature also shows that voter turnout has a correlation to education. However, as far back as the early 1960s, disparities in voter education were shown to be more closely correlated to education in the USA than in Norway (Rokkan and Campbell 1970). In Norway, many of those with a lower education were members of groups and organisations that had close links to political parties, which in turn meant they were mobilised to participate. Thus, there is not necessarily a direct correlation between low education and low political participation.

Women with a higher education are most likely to vote

In recent elections in Norway, the trend has been for women to participate to a greater extent than men. Sample surveys conducted by Statistics Norway in connection with elections show that the turnout tends to be a few percentage points higher among women (see Table 2). However, this is ambiguous when controlling for other indicators, such as age and education. In relation to age, the voter turnout has an almost inverted U-shape; a relatively low level for the youngest group, rising for the middle aged and falling again among the oldest group. This concurs with the so-called integration hypothesis; those who are most integrated into society will also show the greatest tendency to vote in elections.

Young people who are still living at home and not yet part of working life are less likely to vote than those in employment. Another group that is generally not in employment, is the oldest group, and here we also see a lower voter turnout. First-time voters (18-19-year-olds) are more likely to vote than those in their early 20s. School elections and the focus on first-time voters are no doubt part of the explanation for this. Another factor is that when young people are in education they often do not live in their home municipality, which can make it difficult for them to vote.

Figure 6 shows voter turnout by education and age. We see that the age effect (the inverted U-shape) also applies here, with the youngest voting the least in every level of education. In the youngest age group (20-24 years) with a primary or lower secondary education, the turnout is 32 per cent, while the corresponding share in the group aged 45-79 years is approximately 84 per cent. The disparity in turnout based on education level is greatest for the two youngest groups. This may be an indication that Norway could end up in a situation similar to that of the USA, for example, where there are major disparities in voter turnout according to education. 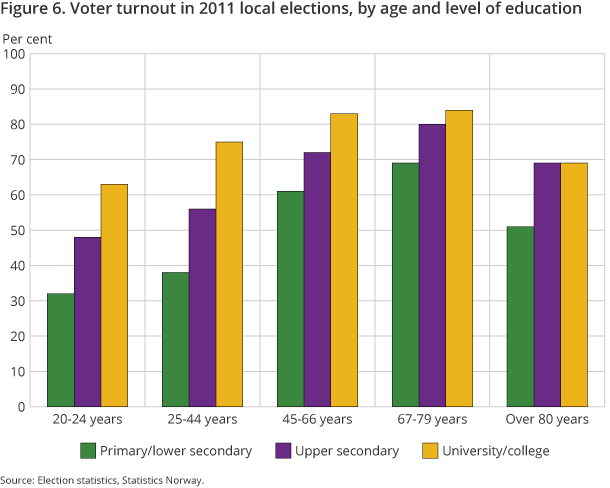 Only three in ten foreign nationals voted in 2011

Voter turnout among foreign nationals increases with length of residence 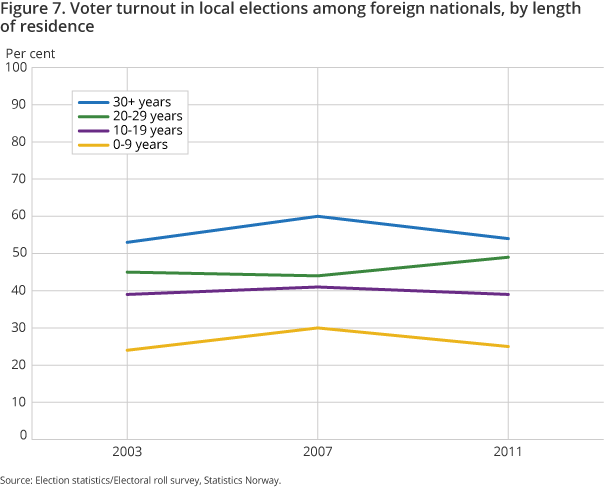 Voter participation is lower among virtually all foreign nationals than Norwegian citizens. This is also a feature we see in most other European countries, i.e. the country›s own citizens are more likely to vote than the foreign nationals in local elections (see for example Bhatti et al 2014). In the 2011 election, Dutch citizens had the highest turnout, with 56 per cent, and around half of the Somalis exercised their right to vote. The turnout for Polish citizens was just 8 per cent (see Figure 8). 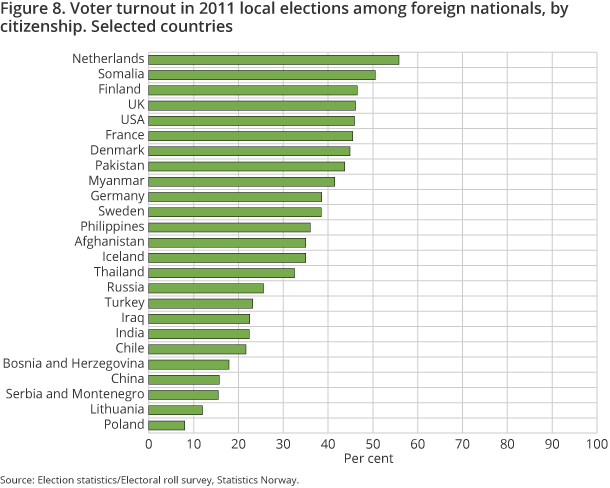 European Union and the Committee of the Regions (2009) Participation in the European Project: How to mobilize citizens at the local, regional, national, and European levels. European Union.

Klausen, J.E. (2005). «Kan deltakelsen i lokalvalg økes?» (“Can participation in local elections be increased?”) In Tidsskrift for Samfunnsforskning.

Zhang, Li-Chun, Ib Thomsen and Øyvin Kleven (2013) “On the Use of Auxiliary and Paradata for Dealing with Non-sampling Errors in Household Surveys” in International Statistical Review (2013)