Weaker surplus in the balance of goods and services

The balance of goods and services is weakened both measured against last quarter and against the same quarter in the previous year. Looking at the development from the previous quarter the decline in exports was caused by a drop in the income from exports of oil and natural gas. This is mostly due to price changes on these commodities.

Looking at total export compared to 4th quarter of 2018 we see a clear decline of NOK 16 billion. As already mentioned this is mainly due to a drop in the export of oil and gas where the reduced prices play an important role. If we, however, compare the total export with the same quarter in previous year, the development is the opposite, up NOK 16 billion. Measured this way the development in exports of oil and gas is less important, while export of services is more important.

The imports could be examined in the same manner. The total imports have dropped by NOK 8 billion measured against previous quarter, where the total imports exceeded NOK 300 billion. However, compared to 1st quarter of 2018 there was a NOK 28 billion growth on total imports. This growth was driven by imports of “Other goods” while comparing with previous quarter the decline was driven by imports of services, and in particular the seasonal sensitive item “Travel” which decreased by almost NOK 4 billion.

For more information about export and import, including price and volume considerations and seasonal adjustments, please see the quarterly national accounts.

When it comes to primary income and secondary income to- and from abroad in 1st quarter 2019 there was a modest growth in the sum of these two items related to the 1st quarter in 2018. Preliminary calculations show that the income to Norway was a bit higher than the income to abroad, leaving the balance of income and current transfer almost NOK 3 billion higher than the same period in 2018. 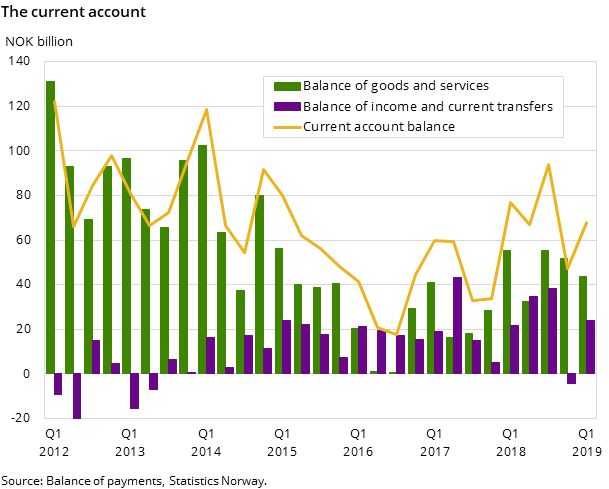