The current account balance is estimated at NOK 19 billion in the preliminary figures for 2019. We need to go back to 4th quarter of 2017 to find equally low figures.

Exports of goods and services in the fourth quarter of 2019 ended at NOK 338 billion. This is NOK 29 billion more compared to the previous quarter, but NOK 16 billion less compared to the same quarter last year. The income from crude oil and natural gas counts for 36 percent of the total export value. 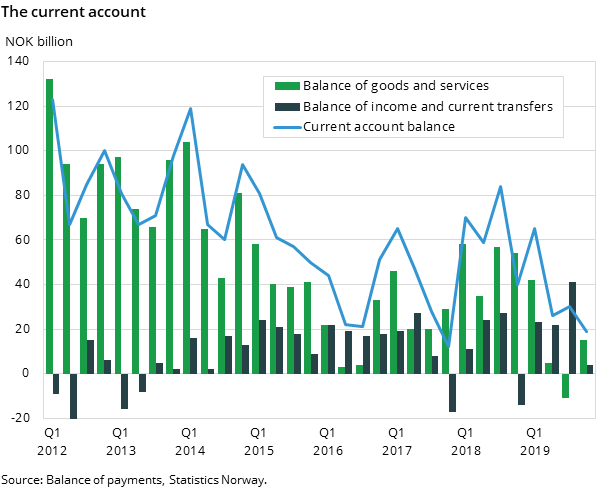 At the end of the 4th quarter of 2019, Norway’s net foreign assets amounted to NOK 8 750 billion. This was an increase of NOK 306 billion from the previous quarter.

Altogether, 2019 was a very good year for Norway’s international investment position. The net foreign assets saw a rise of NOK 1 808 billion during the year, up from NOK 6 942 billion at year end 2018. As shown in figure 2, the rise was mainly driven by other changes. 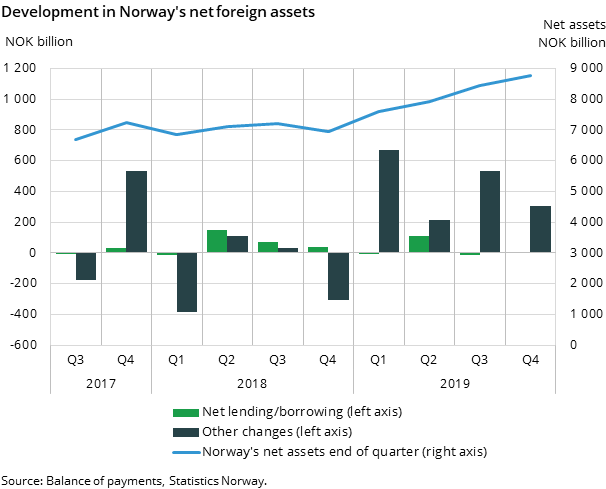 During 2019 the global stock markets had a great upswing, the rice in market prices highly contributed to the increase in Norway’s assets abroad. This applied especially for Norwegian portfolio investment, at the end of 2019 4th quarter, portfolio investment abroad amounted to NOK 12 032 billion. This was a rise of NOK 442 billion from the previous quarter, and an annual rise of total NOK 2 018 billion from 2018. Of this, other changes amounted to NOK 1 730 billion, consisting mostly of revaluations due to market price changes.

Net lending had very little impact on the rise of net foreign assets in the 4th quarter, amounting to only NOK 2 billion. During this last quarter of the year, Norwegians invested NOK 108 billion abroad, highly driven by Portfolio investment, where the Pension Fund Global (GPFG) was the main contributor, investing in debt securities and equity.

At the same time, Norwegians incurred liabilities towards the rest of the world of NOK 106 billion. Here also, the GPFG was the main contributor, incurring debt in the form of repurchase agreements, or so-called secured borrowing.

Exports and imports are revised for 2019. There have been some revisions of the exports of goods for 1st to 3rd quarter. This revision is mostly due to a downward revision of export of crude oil and natural gas for the 1st and 2nd quarter, and an upward revision in the 3rd quarter of the same goods. Exports of services is slightly adjusted downward.

When it comes to imports of goods there is a small upward adjustment of the two first quarters. The 3rd quarter is reduced by approximately NOK 2 billion. This is about imported goods to the oil and gas extraction. The service import is revisions upward by NOK 2-, NOK 1-, and NOK 2 billion respectively for the first three quarters. This is mainly about operating cost in shipping, and travel.

Income and current transfers have also been revised for the three first quarters of 2019. The biggest revisions are due to revised figures for reinvested earnings from abroad, which have been adjusted up with more than NOK 4 billion for the first three quarters of 2019. Income to abroad has also been revised. Reinvested earnings are revised downwards, but with an upward revision of dividends to abroad the net revision is only about 0,5 billion for the 2nd and 3rd quarters.

The financial account is revised back to the 1st quarter of 2018.