The total export of goods and services in the 3rd quarter was the highest since the start of the millennium. The preliminary estimate is more than NOK 348 billion.

Export of other goods down – export of services up

The export value of other goods, which means other than crude oil and natural gas, and other than ships, declined by NOK 5 billion in the 3rd quarter of 2018 from a high level in the previous quarter. The export of services, on the other hand, increased by NOK 9 billion, to a record high.

The import is about NOK 5 billion lower than in the 2nd quarter, but higher than the average of the imports of the four previous quarters. The balance of goods and balance of services are both higher than in the previous quarter. This is also the case when comparing with the same quarter of the previous year. The balance of goods and services is preliminarily calculated at NOK 56 billion, up from NOK 34 billion in the 2nd quarter. The preliminary figures on exports and imports in the 3rd quarter are more reliable for goods than for services. For more information about export and import, including price and volume considerations and seasonal adjustments, please see the quarterly national accounts .

Income and current transfers from abroad were measured at almost NOK 104 billion in the 3rd quarter of 2018, which was high compared to the corresponding quarter in 2017. Compared to the 2nd quarter in 2018, however, the income was substantially lower. When it comes to the income components these have to be interpreted in light of significant seasonal effects. With income to abroad measured at NOK 68 billion the balance of income and current transfers amounts to almost NOK 36 billion. Added with the balance of goods and services this gives a current account balance of almost NOK 92 billion in the 3rd quarter. This is the highest current account balance since 2014.

Portfolio investments increased substantially on the asset side, with a rise in equity abroad of NOK 54 billion. The Government Pension Fund Global (GPFG) was the main contributor. The NOK 43 billion rise in debt securities was also driven by the GPFG, together with deposit-taking corporations except the central bank.

On the liability side, the financial account shows an increase in portfolio investments in Norway of NOK 28 billion. Here, both non-financial and deposit-taking corporations incurred liabilities in debt securities.

The balance of goods and services was revised down NOK 1 billion for the 1st quarter and up NOK 200 million for the 2nd quarter of 2018.

The financial account is revised back to the 1st quarter of 2017. Revisions in 2018 are mainly due to a change in the reporting for Norwegian financial institutions from January 2018 and forward. 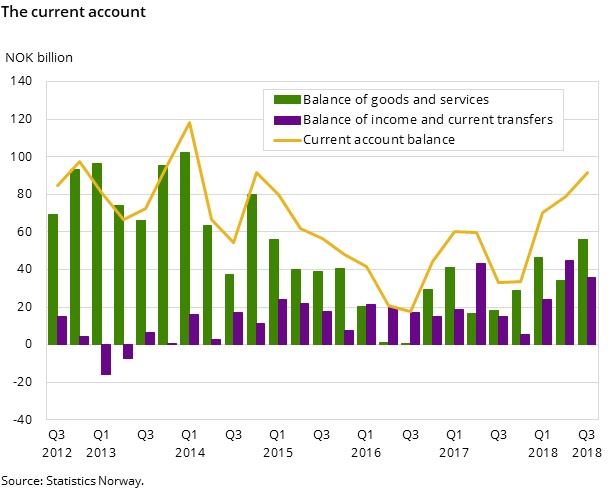