Preliminary figures for the 1st quarter of 2020 shows that Covid 19 had little impact on Norway's economic relations with foreign countries, although the pandemic disease had a marked impact on the travel figures in the balance of payments. The 1st quarter of the year shows a fall of 5.5 billion and 1.7 billion on imports and exports, respectively. This is a sharp fall considering that the effect is mainly due to the virus outbreak in Norway in the beginning of March. But there are other factors that have had a greater effect on the development of expenses and income in the balance of payments account. 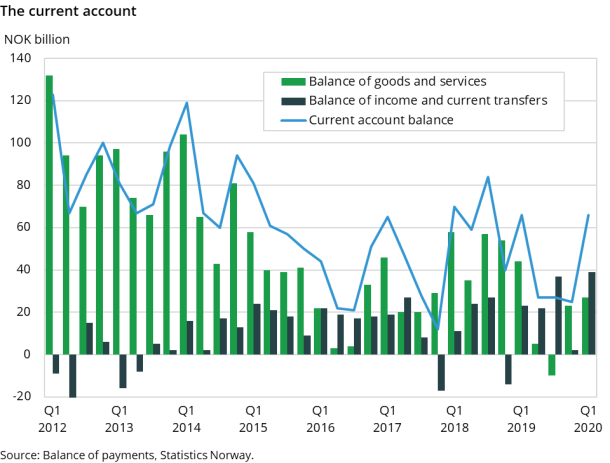 The balance of income and current transfers is historical high, with a surplus of almost NOK 39 billion in the 1st quarter of 2020. As the Government Pension Fund Global has grown large, the importance of income from the Fund has made itself well visible on the total income and current transfers balance. At the same time the fluctuations from quarter to quarter is substantial. Payments of dividends from companies are often linked to fixed quarters. In addition, the exchange rate fluctuations affect the magnitude of the flows since income and expenses are measured in Norwegian kroner. In the 1st quarter of 2020 the Norwegian krone has weakened somewhat against foreign currencies, particularly at the end of the quarter. This has made the income higher as it is measured in Norwegian kroner. Compared to the 1st quarter of 2019, total income was NOK 13 billion higher in the 1st quarter of 2020. At the same time, the expenses were NOK 3 billion lower. The high growth in income is primarily due to higher income to the Government Pension Fund Global.

At the end of the 1st quarter of 2020, Norway’s net foreign assets amounted to NOK 8,828 billion. This was an increase of NOK 140 billion from the previous quarter. 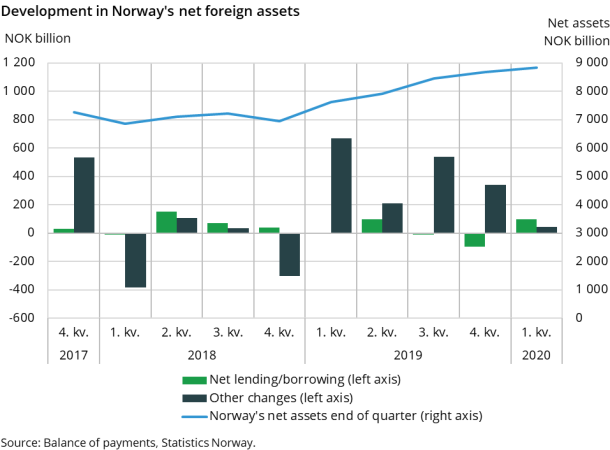 Net lending contributed the most to the rise of net foreign assets in the first quarter of the year, amounting to NOK 99 billion. During this quarter, Norwegians invested NOK 337 billion abroad, primarily driven by investments in debt securities, which are classified under Portfolio investment.

At the same time, Norwegians incurred liabilities of NOK 238 billion against the rest of the world. There was a rise in other accounts payable, and Norwegian banks increased their deposits from abroad.

Exports and imports are revised for all quarters of 2019.

Income and current transfers are revised for all quarters of 2019.

The financial account is revised back to the 1st quarter of 2019.