The balance of goods and services ended at NOK 8 billion in the fourth quarter of 2020 following two consecutive quarters below zero, according to preliminary figures. This did not prevent Norway from having a trade deficit for the year 2020, which should be seen in light of the corona pandemic. Both exports and imports fell significantly.

The export value of goods and services in the fourth quarter of 2020 is currently estimated at NOK 301 billion. This is more than NOK 43 billion less than in the same quarter last year but NOK 44 billion more than in the second quarter of 2020. Low oil prices and travel restrictions led to low export revenues, as they did in the previous quarters.

Total imports are estimated at almost NOK 293 billion for the fourth quarter of 2020, about NOK 26 billion less than in the fourth quarter of the previous year but NOK 18 billion more than in the third quarter of 2020. Imports of goods grew but total imports declined due to a NOK 38 billion drop in imports of services. The decline is primarily due to the drop in Norwegian imports of travel, which fell by more than 92 per cent measured against the same quarter the year before, because of travel restrictions. This amounts to about NOK 31 billion. 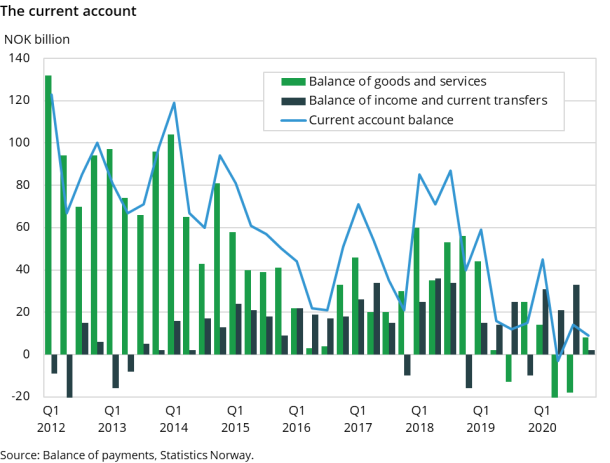 The corona pandemic led to a decline in both income from and expenditures abroad in the fourth quarter of 2020, as was also the case in the two previous quarters. As in the previous quarters the fall in the income was less than the fall in the expenditures. This resulted in a balance of income and current transfers of less than NOK 2 billion in fourth quarter, about NOK 12 billion more than in the fourth quarter in 2019. It is a downturn in all the components of the primary income during 2020, both on the income and expenditure side. Compensation of employees abroad, declined by NOK 5 billion in 2020. Interest payable and interest receivable were heavily reduced, due to lower interest both in Norway and abroad.

Dividends were also severely affected, with dividends payable falling by NOK 19 billion compared to the fourth quarter in 2019 and NOK 65 billion for 2020 compared to 2019. This can be attributed to several factors: Firstly, many companies may have refrained from paying dividends in 2020 at the request of the government in connection with the provision of financial support schemes. It is probable that foreign companies that pay dividends to Norwegian owners have to a lesser extent been influenced to make similar cuts or cancellations of dividends. Secondly, it is plausible that the Norwegian companies that are most likely to receive large foreign direct investments have performed poorly, such as oil and gas companies, which have faced low prices for crude oil and natural gas in 2020. Thirdly, something may be due to a lack of reported data. For the fourth quarter, the increase in net primary income is NOK 16 billion from the fourth quarter of 2019. For 2020 in total, the corresponding increase from 2019 is NOK 49 billion.

Reinvested earnings drag down the balance of income and current transfers by about NOK 10 billion. These figures are currently calculated based on several assumptions rather than statistics and are even more uncertain than normal in the somewhat chaotic circumstances of the corona period. This means that larger revisions of these figures can be expected in the future before the publication of final figures.

It is worth mentioning that Norwegian kroner have on average been weaker throughout the year than our trading partners’ currencies, even though the level at the end of the year had fallen back and was more like the beginning of the year before the pandemic set in. In any case, this will mean increased income in Norwegian kroner in 2020, while expenses will not be affected in the same way as long as they are nominated in Norwegian kroner. 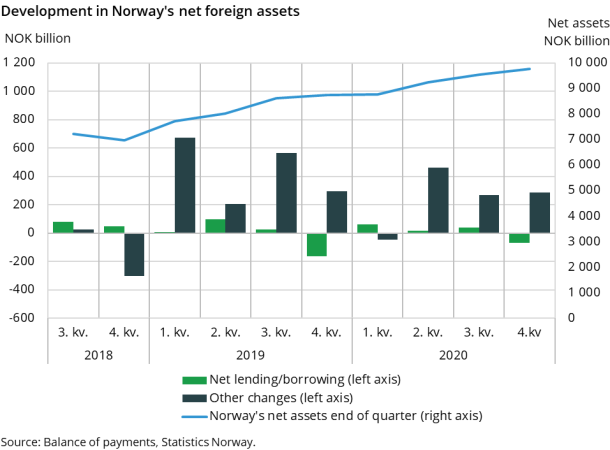 The Norwegian krone depreciated, all in all, in 2020, which was positive for Norway's net foreign asset in the sense that positions held in foreign currency became more valuable due to positive exchange rate changes.

During the last quarter of the year, Norwegians invested a total of NOK 62 billion abroad. This was highly driven by Portfolio investments, where the Government Pension Fund Global (GPFG) was the main contributor. At the same time, Norwegians incurred liabilities towards the rest of the world of NOK 135 billion. This increase was largest in the functional category other financial investments, also here the GPFG contributed the most, incurring debt in the form of repurchase agreements, or so- called secured borrowing.

Many parts of the economic statistics have been affected by the corona pandemic, and the uncertainty is unusually high. However, the international accounts seems to have been less affected. Providers of primary data have been able to collect the necessary information according to the planned schedule, and the data quality seems satisfactory. The uncertainty about the foreign accounts for the fourth quarter of 2020 does therefore not seem to be greater than usual.

The financial account has been revised back to the first quarter of 2019. In addition, figures for reinvested earnings 2017 has been updated.

The balance of income and current transfers have been revised down by approximately NOK 2 billion for the first three quarters combined. These concern interest and dividend payments to and from abroad.

Revisions of 2017 and 2019 have also been carried out. For these years, there are only revisions of so-called reinvested earnings. The statistics on which the foreign accounts base their calculations of these figures are published so late that the final figures are sometimes not included. Therefore, there is also a need to revise afterwards. The revisions mean that the balance of income and current transfers for 2017 will increase by about NOK 28 billion. For 2019, the interest rate and benefit balance will increase by almost NOK 11 billion compared to previous publications.